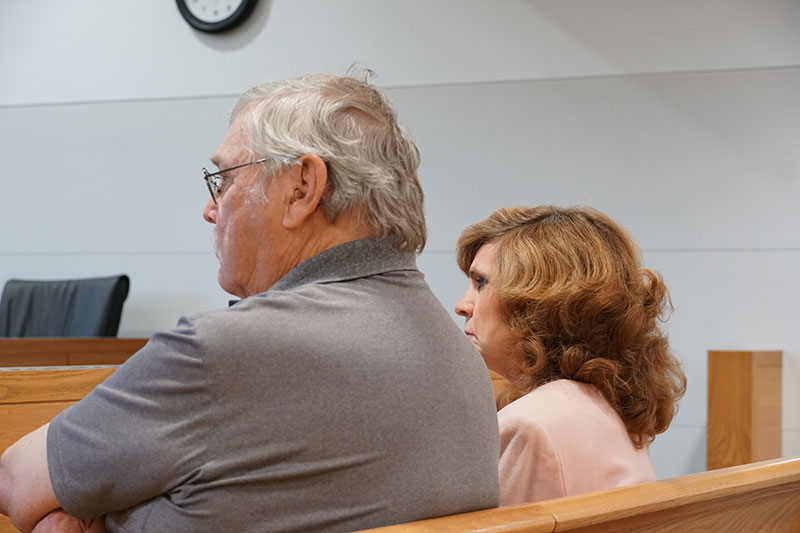 Richard and Marjorie Motzer watch the proceedings Jan. 24 from the courtroom gallery in the case they brought and lost against the city of Holmes Beach. Islander Photo: Kathy Prucnell

A judge issued a four-page opinion that turns down the noise and brings a win for the city.

In ruling, the judge cited the constitutional separation of powers.

The Motzers live in the 400 block of 56th Street in Holmes Beach, where their residence is bordered by short-term rental properties on Holmes Boulevard and 55th Street.

Bothered by the noise from the properties and frustrated with a perceived lack of police enforcement, the couple sued the city in June 2018, asking the court to order the city and its police department to enforce its noise ordinance.

In their complaint, the Motzers alleged a
series of occasions during which law enforcement failed or declined to enforce the noise ordinance, saying police were improperly trained, came to subjective conclusions and also failed to properly measure sound.

Siding with the city, however, Sniffen ruled the judiciary cannot interfere with discretionary functions of other branches of government, including an officer’s power to enforce criminal laws or issue civil citations.

Attorneys Anthony J. Manganiello III of Icard Merrill of Sarasota, representing the Motzers, and Thomas Thanas, with the Dye firm in Bradenton, for the city, argued Jan. 24 before Sniffin.

The Motzers are analyzing their legal options, Manganiello wrote in March 21 email, but made no comment on the order.

Thanas referred comments to Holmes Beach Mayor Judy Titsworth, who said Sniffin’s order was fair and should end the case.

The mayor said she understood the Motzers wanting a quiet neighborhood, but added, “Daytime noise is hard. It’s kids swimming in pools, playing … and it’s just going to happen.”

As far as future complaints from the Motzers, Titsworth said the police will respond and issue a citation if there is a violation of the ordinance.

In related but separate cases, the Motzers prevailed against the owners of the Holmes Boulevard and 55th Street properties, Jennifer and Shawn Kaleta, who initially claimed the Motzers were stalking their renters, causing losses to their businesses.

The Kaletas dropped the stalking counts and, on Aug. 30, 2018, the two cases — one for each rental property — were dismissed after the judge ruled the owners failed to allege facts to support a protectible business interest.