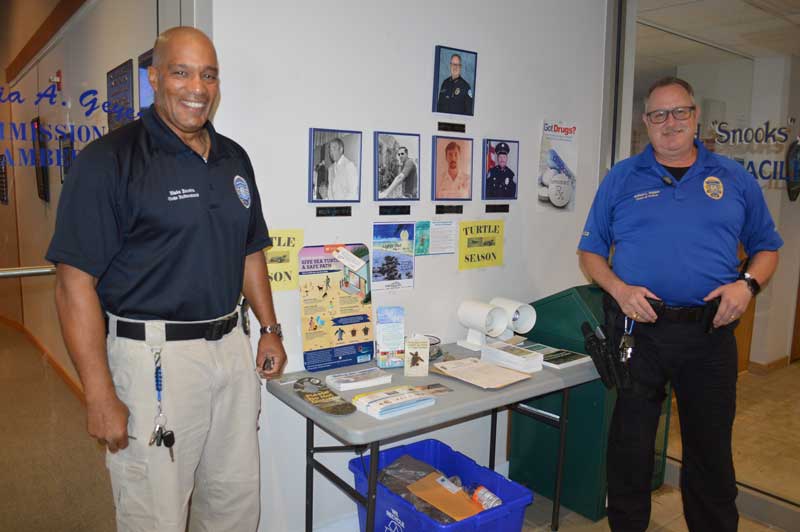 The official start for sea turtle nesting season on Anna Maria Island is May 1.

But the turtles can be expected any day.

The first nest in 2018 was marked May 13 on Coquina Beach in Bradenton Beach.

With mature females making their way to island beaches to deposit their eggs, precautions — for people and turtles — must be taken.

This means lighting visible from the shoreline must be sea turtle-friendly.

A record-breaking number of loggerhead sea turtle nests — 534 — were counted on Anna Maria Island in 2018.

Adult female sea turtles only leave the water to nest. They use their instincts to follow the natural light from the reflection of the moon and stars on the surface of the water to return to the Gulf of Mexico after depositing their clutch of eggs.

The hatchlings follow the same instincts when they emerge from the clutch to the sandy surface — they head to the sparkle of light on the water.

Bright lights visible from the shoreline can distract sea turtles away from the water, increasing the likelihood of death by predation or exhaustion, when they lose sight of the water, according to the Florida Fish and Wildlife Conservation Commission.

Additionally, beach equipment, including rafts, canopies, volleyball nets and tents, left on the beach overnight, as well as holes dug in the sand, can be impediments to nesting turtles.

During nesting season, which runs through Oct. 31, Anna Maria Island Turtle Watch and Shorebird Monitoring must depend on code enforcement in Anna Maria, Bradenton Beach and Holmes Beach to keep the beaches safe for sea turtles and people.

The state and municipalities have ordinances to deal with sea turtle lighting violations. Additionally, loggerheads are protected by the U.S. Endangered Species Act of 1973 and the Florida Marine Turtle Protection Act.

However, the cities also have been preparing in the off-season.

In 2018, Anna Maria amended its nuisance ordinance to make large holes on the beach a violation, according to code enforcement officer and turtle watch volunteer Debbie Haynes.

“Holes on the beach are unsafe for people and sea turtles,” Haynes said. “I’m glad something is being done.”

In 2017, the city enacted a fee schedule that includes fines for property left overnight on the beach and lighting violations.

In Holmes Beach, last year, the commission included sea turtle ordinance violations on its notices of violation form and also includes a compliance check as part of the city’s new vacation rental inspections.

Also, some beachfront property owners have pruned back trees and bushes that previously blocked light visible from the shoreline — including lights that are visible through the vegetation from other sources.

“We are being proactive and letting people know that if they trimmed back their shrubs, lights that weren’t visible may be visible now,” Thomas said. “So we ask them to quickly come into compliance and install turtle-friendly bulbs.”

Suzi Fox, AMITW executive director, said she has been contacting owners at locations that consistently had lighting problems to provide them with bulbs.

“No one should have to turn out a light,” Fox said. “That’s not safe. We want people to have bulbs they can leave on year-round.”

She said she hopes to receive grant funding through the Sea Turtle Conservancy to purchase more bulbs.

“People have been really receptive,” Fox said. “When more funding comes through, we can do even more.”

Visit myfwc.com/seaturtle and click on “Sea Turtles and Lights” or “Wildlife Friendly Lighting” for more information on keeping beaches safe for sea turtles.

The Florida Fish and Wildlife Conservation Commission recommends people follow these guidelines for sea turtle safety:
• DO turn off or adjust lighting along the beachfront to prevent nesting sea turtles from becoming disoriented and moving toward the glow of light on land, instead of natural light reflecting on the surface of the water. Indoor lights should be turned off, with curtains closed after dark, and outdoor lighting should be turtle-friendly bulbs. Use fixtures low to the ground and shielded from view at the shoreline.
• DON’T use flashlights or camera flashes on the beach at night. They can distract nesting sea turtles and cause them to return to the water.
• DO clear the way at the end of the day. Nesting female sea turtles can become trapped, confused or impeded by gear left on the beach at night. Remove items such as boats, tents, rafts and beach furniture and fill in holes or level sand castles before dusk. Holes trap turtles and can injure people.