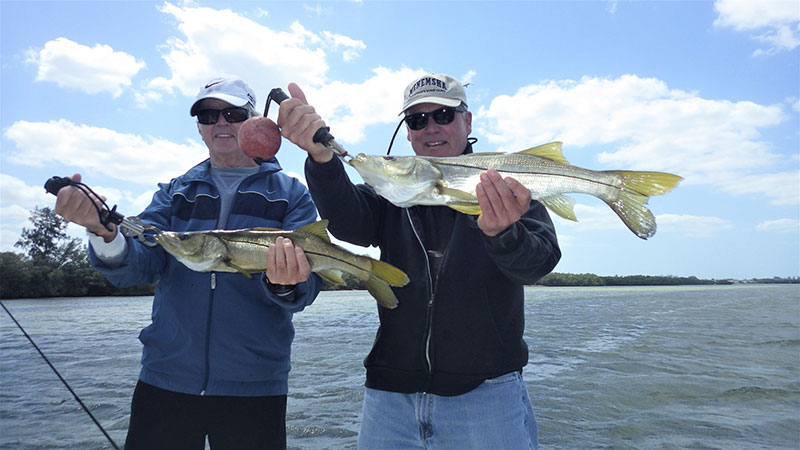 Brothers John and Tom Sullivan, visiting the island area from Nevada, show off their March 28 double snook catch, hooked using shiners and released. The brothers were guided to the fish by Capt Warren Girle.

We are still experiencing cold fronts moving across Florida from the north, but fishing around Anna Maria Island is quite good.

Fishing inshore is yielding variety, including Spanish mackerel and spotted seatrout and sport fishing for redfish and snook.

Numerous schools of bait fish — glass minnows and Spanish sardines — are being found throughout our inshore waters, which is triggering the predatory fish to really turn on.

Moving offshore, frequent reports of migratory fish — blackfin tuna, kingfish and cobia — are a good reason to venture into the Gulf of Mexico.

On my Southernaire fishing charters, I’m mainly working the flats of Tampa Bay and its surrounding waters to the south and east, where spotted seatrout are making a decent showing among the deeper grass, along with Spanish mackerel and ladyfish.

Casting free-lined live shiners in these areas is working well for the trout. Once the macks show up, the shiners work well, but a longshank hook is needed and, even in the crystal-clear water, the trout are hitting the bait on the larger hook.

On the shallower flats around mangroves, I’m finding plenty of catch-and-release snook. As the tides get higher, these fish are tucking up under the branches of the mangroves so casting skills come in handy. I’m also seeing some nice catch-and-release redfish mixed in with the snook bite.

Jim Malfese at the Rod & Reel Pier is seeing the spring catch-and-release snook taking up residence. As the waters warm, this trend will last throughout the summer as more linesiders migrate toward the beaches to spawn.

Pier fishers using shrimp are catching some sheepshead, as well as a few flounder and catch-and-release redfish.

On days when the bait schools are present around the pier, small jigs and silver spoons are attracting Spanish mackerel, jack crevalle and bluefish.

Capt. Aaron Lowman also is fishing the flats of Tampa Bay and its adjacent waters for the variety of fish found there. On deep grass flats, spotted seatrout, Spanish mackerel and ladyfish are supplying good action for Lowman’s clients.

Getting shallow and casting around mangrove shorelines and oyster beds is yielding good action on catch-and-release redfish and snook.

Hunting in the Gulf of Mexico with Lowman is proving to be good — mangrove snapper and Key West grunts are being found.

For the macks and kings, Girle is casting free-lined live shiners connected to a longshank hook. Some wire is added when targeting the kings. As for the ’cuda, fresh-cut chunks of mackerel are working.

Moving inshore, Girle is putting clients on numerous spotted seatrout on the deeper grass flats of Tampa Bay and the Manatee River. Shallow grass flats in these bodies of water are holding catch-and-release snook and redfish and producing action for sport fishers.

Capt. David White of Anna Maria Charters is fishing inshore for spotted seatrout, as well as catch-and-release snook and redfish. He reports all three species are taking live shiners as bait. White is helping clients target these fish with a fly rod, which is challenging and rewarding.

Moving offshore, White is incorporating the fly rod to catch large migratory predators — amberjack, kingfish and barracuda. Clouser flies are working well for the inshore fish while large poppers are a “go to” for the ’cudas and kings.

Capt. Jason Stock is taking clients offshore in pursuit of blackfin tuna. Fishing offshore wrecks and other structure us yielding numerous tuna 20-30 pounds. Hooking into these high-speed migratory fish is a thrill few will forget.

Other species in Stock’s sights are coming to the hook, including kingfish and cobia. Both species are being caught on live and artificial baits. Lastly, Stock boasts of an exceptional permit bite. He says live crabs as bait are a “sure thing.”