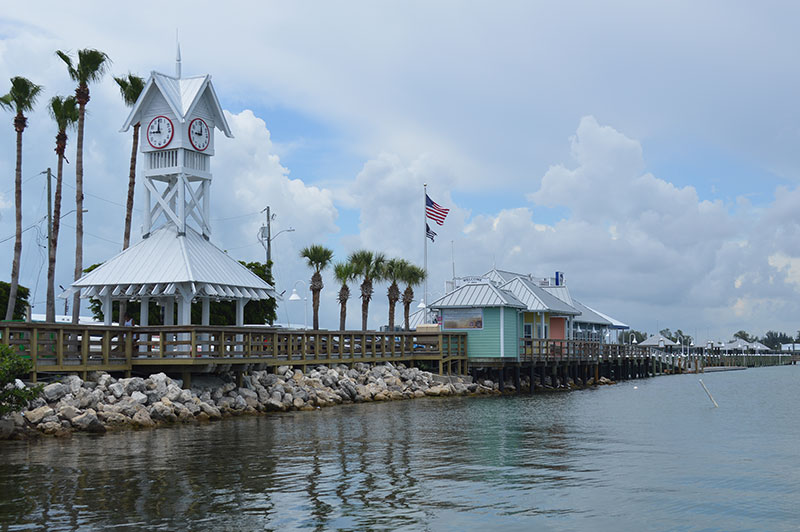 Concerns over maintenance costs have postponed a paint job for the Historic Bridge Street Pier in Bradenton Beach.

Community redevelopment agency members voted 6-0 April 3 to direct Emily Anne Smith, hired to provide a vision for the historic district, to work with PPG Industries to estimate the cost to paint the pier.

Smith proposed painting the pier and other CRA features, including trolley stops and gazebos white with red rooftops.

“I was told about a year or so ago that you wanted to hire me for a vision for this town,” Smith told CRA members April 3.

Smith brought her color concept to the CRA in March, but the CRA sought more information.

Currently, the pier buildings are painted a variety of pastel colors and the railings are unpainted wood.

“I’m making this thread that ties everything together and lets you know where you are,” she said of the resistance to change by the CRA.

She brought PPG Industries territory manager Joann Geltman and Chloe Roper, manager of a store in Bradenton, to discuss the paint and the work involved.

Geltman said if the city hires PPG for the job, the company’s “Permanizer” exterior acrylic paint would be used.

She said it is durable, has a 10-year warranty and is safe for marine life, as well as ultraviolet-, mildew- and algae-resistant.

However, Geltman did not recommend pressure washing the pier if it’s painted, saying it would force water under the paint, causing it to warp and bubble.

Commissioner Ralph Cole, the CRA chair, said he is concerned a painted pier would become a maintenance nightmare for the public works department if employees couldn’t pressure wash the structure.

Public works manager Tom Woodard said his department dealt with “constant” issues with the old pier and he only has four employees to maintain the pier. He added that maintenance should be outsourced if the pier is painted.

“The pier is just not an issue to me,” Woodard said at the meeting. “It’s fine. It’s perfect.”

Mayor John Chappie, also a CRA member, said he needed to learn more about the cost of painting the pier white so CRA members can determine if the costs are worthwhile when compared to the value of Smith’s aesthetic color scheme.

Chappie said the city also would reserve a decision on painting the pier’s roof red until after another professional can present the agency with details.

Smith said she invited a professional to present information about painting the metal roofs, but that person did not attend.

CRA members voted 6-0 to authorize Smith to attain three quotes for painting the pier rooftops to present at the CRA’s next meeting.

Brian Burress, owner of Dynamic Electrical, said during public comment that he shares Smith’s vision for bringing back “old Florida” and implored CRA members to let her vision become a reality. He said the public works department should be provided the resources and staffing to complete the job if approved.

“You hired Emily to come up with a vision, but you don’t seem to want to follow it,” Bradenton Beach resident Susan Billow said during public comment. “You hired her for this project, and you just can’t seem to get going on it.”

5 thoughts on “Color concerns hold up ‘vision’ in Bradenton Beach”