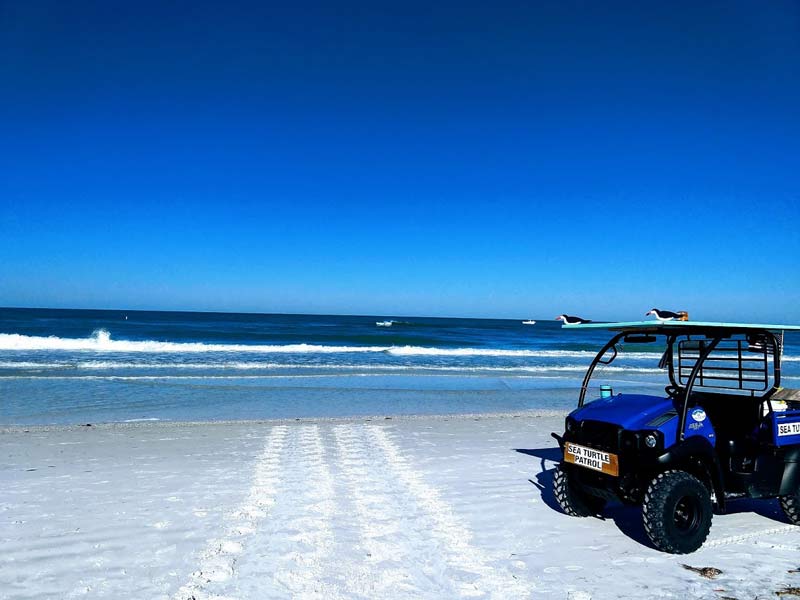 Sea turtle tracks in the sand, spotted by AMITW volunteers — lead from the water and back again early morning April 27 at Coquina Beach in Bradenton Beach. The activity was deemed a “false crawl” — no nest was found. Islander Photo: AMITW

The loggerheads are off to an early start on Anna Maria Island.

Sea turtle nesting season officially began May 1, but the first activity of the season — three false crawls — was spotted on island beaches April 27.

A false crawl occurs when a female turtle leaves the Gulf of Mexico to nest, but returns to the water without laying her eggs. The season often begins with false crawls as the female sea turtles are “testing the temperature of the sand” before depositing their eggs, according to Anna Maria Island Turtle Watch and Shorebird Monitoring executive director Suzi Fox.

“It’s gotten warmer recently and everything with sea turtles is about temperature,” Fox said April 27 regarding the early activity.

The first nest of a record-breaking 534 nests last season was spotted May 13, 2018, at Coquina Beach in Bradenton Beach.

Also, as of April 27, Mote Marine Laboratory of Sarasota had documented seven nests south of AMI on the beaches of Casey Key, Longboat Key and Venice.

Every year, officially May 1-Oct. 31, female sea turtles — mostly loggerheads on the Gulf Coast — return to beaches near where they hatched to lay their eggs.

Each of the 73 turtle watch volunteers is assigned to walk a turn on a 1-mile stretch of beach just after sunrise, looking for the tell-tale tracks that indicate a sea turtle came ashore to nest.

Later in the season, they will scan the shore for signs of hatches.

Once spotted, nests are marked with tape and stakes and observed for data and protection.

Fox said several people she spoke with on the beach April 27 near where the false crawls were spotted recognized the tracks as being made by sea turtles.

“I was impressed that the public knew what the tracks were,” Fox said. “It’s good to know that people are out there keeping an eye on our wildlife.”

For more information on sea turtle nesting on AMI, contact Fox at suzifox@gmail.com or 941-778-5638.

Visit myfwc.com/seaturtle and click on “Sea Turtles and Lights” or “Wildlife Friendly Lighting” for information on keeping beaches safe for sea turtles.