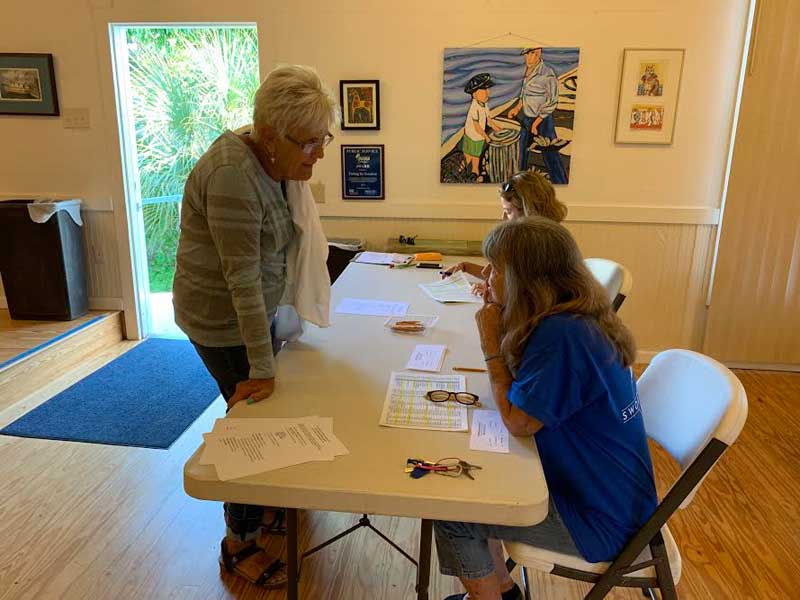 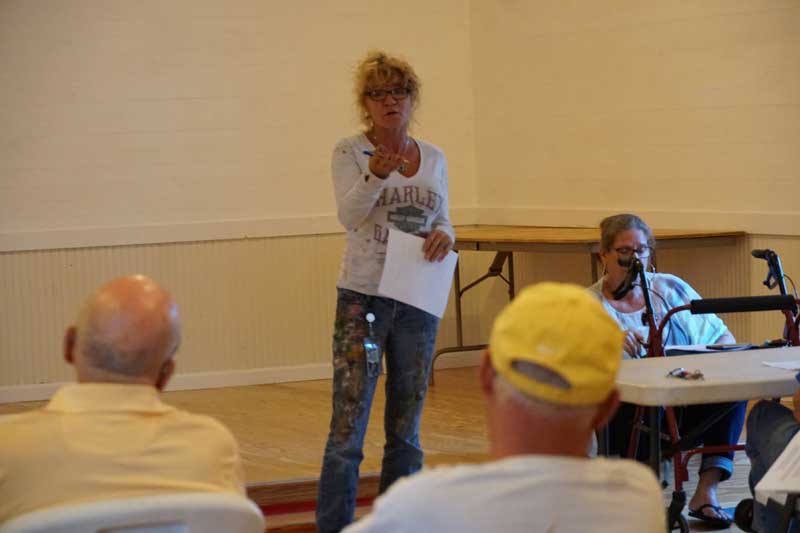 Rose Lipke, FISH director and 2019 chair of the Cortez Commercial Fishing Festival, reports April 15 on the fest to FISH members.

Sound finances. A successful 2019 festival. And, there’s the possibility of keeping some Australian pine trees while restoration continues at the FISH Preserve.

About 20 members of the nonprofit Florida Institute for Saltwater Heritage heard the highlights of the past year April 15 at their annual meeting.

FISH, a 210-member group run by a 15-member board of directors, owns and manages several properties in Cortez, including a 100-acre preserve, a boat shop, Fishermen’s Hall and the old Cortez fire station. The nonprofit formed in 1991 to protect the village settled by commercial fishers in the late 1800s.

“I’m once again very pleased to say that FISH is of a very sound financial position,” treasurer Mike Northfield told the members, adding FISH holds about $161,000 in the bank compared to about $142,000 a year ago.

In addition, FISH paid down the mortgage on the preserve, reducing the debt to $196,000 from about $261,800 the prior year. The mortgage was undertaken in 2016 to purchase three parcels, formerly known as the Lemasters’ property, in the center of the preserve.

FISH netted $30,000 from a May 2018 fundraiser, which helped cover a shortfall from the 2018 Cortez Commercial Fishing Festival, he said.

Since 2015, Lipke chaired the festival. She resigned after this year’s fest after taking on full-time work. According to the organizers, the volunteer job is still open for 2020.

McVey thanked the more than 100 volunteers, saying “Without you, we couldn’t have offered such a fun festival.”

Lipke answered questions about why local restaurants don’t participate, saying it was likely due to the strain on local businesses in season.

According to Lipke, traffic gets worse each year, but she said the festival made $17,000 more than in 2018.

Also discussed was the status of the ongoing invasive tree removal project in the FISH Preserve and member Mike Norman’s plea to keep Australian pine trees for their aesthetic value. Norman wrote the board, asking for a vote of the membership on the issue.

Jane von Hahmann said while the trees provide shade, nothing grows under them, and under the current plans, some will be removed.

The board could consider keeping some trees on the eastern border and she’d work on a proposal for the membership, she said.

FISH is midway through a phased-in restoration plan, which was created as a multi-phased project by Scheda Ecological Associates of Sarasota and began in 2014 with the support of the Sarasota Bay Estuary Program and the Southwest Florida Water Management District.

The first FWC project removed Australian pine trees from the western portion of the preserve.

The FWC will soon move east with a contractor to be chosen in April to work on Phase III, removing several acres of invasive trees, leaving a grassy understory, mangroves, live oaks and other coastal vegetation, as well as adding more native plants.

“I think the preserve is going along well,” von Hahmann said, projecting full access in three to five years.