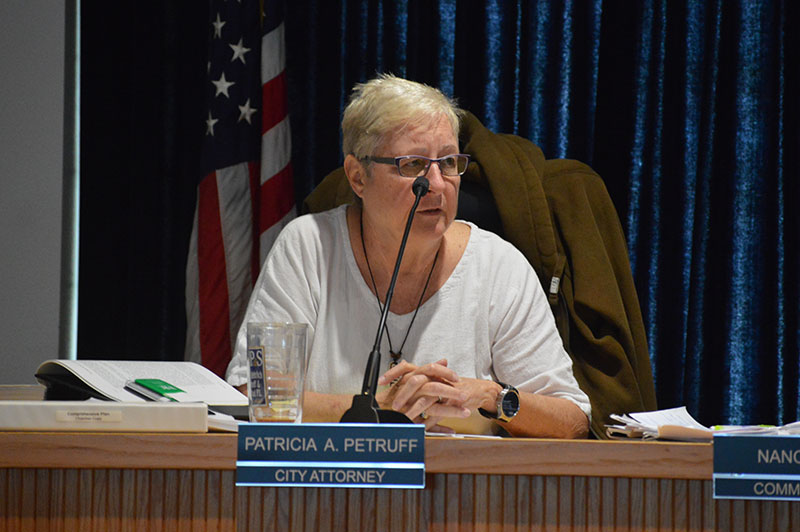 At a March 21 meeting, CRC members unanimously voted not to propose adding term limits and not to increase the length of term from two years to three years for the mayor and commissioners.

Additionally, a motion against amending the charter to require a supermajority to remove department heads was unanimously approved.

Additionally, they began discussing article 4, the powers of the mayor.

Member Sean Murphy was absent, but the group had a quorum, so votes could be taken and any proposed amendments could receive a supermajority.

At a previous meeting, city treasurer Lori Hill proposed a charter amendment specifying that budget amendments be approved by resolution instead of ordinance.

According to the charter, the annual budget must be approved by ordinance with two public hearings and two votes. A resolution only requires one vote. Hill said the proposed change would speed up the budget amendment process and cost the city less money for staff time and advertising hearings.

City attorney Patricia Petruff, attending at the commission’s request, agreed. She said the city could keep the annual budget as approved by ordinance and change the charter to allow budget amendments by resolution, as long as there is a set monetary limit.

“I don’t have any objection to allowing some amendments by resolution, because it makes sense,” Petruff said.

A motion for Hill and Petruff to write a modified version of the budget amendment process, to be presented at the April 4 CRC meeting, passed 4-0.

Zaccagnino asked Petruff if land-use issues could be included in the charter. He said he is concerned that land-use decisions are made by one person — the special magistrate — and said he’s “looking at how people can change land use.”

Petruff said people can petition the government during public comment at commission meetings or hearings, or through a referendum.

Upshaw asked if there is a way to add protections in the charter against rezoning for areas such as beach accesses.

Petruff said that would entail a street vacation, which has happened twice in the past 10 years.

She noted that the Bradenton Beach charter includes protections against city vacations of beach access streets.

A motion to review the Bradenton Beach charter to determine how the city protects its beach accesses passed 4-0.

Following the vote, CRC members began discussing the qualifications and powers of the mayor.

Carlson said she is concerned with the lack of qualifications required to be mayor, citing the charter only specifies the mayor must have resided in the city for two consecutive years.

“If the mayor has such limited qualifications, it seems that’s a vulnerability for our city,” she said.

Upshaw pointed out the CRC already voted to retain the residency requirement at two years.

He stopped short of asking Petruff to investigate adding a requirement for mayoral candidates to be registered voters in the city.

Petruff said any further qualifications, such as requiring a business or similar degree, would be difficult to enforce.

The CRC moved on to powers of the mayor relating to department heads.

The charter states concurrence of the commission is required for the mayor to appoint or remove department heads.

Upshaw said at a previous CRC meeting, members were confused as to the chain of command between department heads, the mayor and commission.

CRC members again discussed removing the building official from the charter, since duties for the position have changed over the years, and how the new director of development services position fits into the city’s order of operations.

Petruff said the building official is required by state law to have certain licenses, which is not required for the development director.

Previously, Mayor Judy Titsworth said the director of development services does not belong in the charter as it is not a necessary position if the city must cut staff.

No motion was made regarding the building official or development services positions.

Upshaw said the CRC would discuss form of government at the next meeting.

Yes, city land can be sold.

The Islander reported in March 2003 that Holmes Beach city commissioners declared the traffic island adjacent to Third Avenue in the 3700 block of Gulf Drive surplus property and sold it to the adjacent property owner, developer Pat McConnell, $25,000 in 2013.

The commission also vacated the portion of Third Avenue abutting McConnell’s property at 3716 Gulf Drive, where he was developing a triplex condominium “dream home” on the Gulffront.

Commissioner Don Maloney was the only opposing vote to both the street vacation and sale of the traffic island.

“Under no circumstances should this commission allow any vacations which might be construed as increasing density in a flood-prone area. Our comprehensive plan does not allow for that. A moratorium on vacations of city roads and property would certainly be in order,” said Perry.

Maloney was denied a moratorium earlier to give the commission time to adopt a formal policy on how to handle land sales and vacation requests.

At the March 21 charter review meeting, Commissioner Claudia Carlson read a letter from Holmes Beach resident Terry Schaefer, a member of the former ad hoc committee that reviewed the city’s form of government in 2018.

CRC member Sean Murphy responded that “68 percent, for me, is not an overwhelming number,” adding that many of the new cities are likely “corporate developments.”

“Small towns like this, that have a democratically elected mayor, are the kindergarten of democracy. That is a great thing, and we should not let it slip away,” he said.