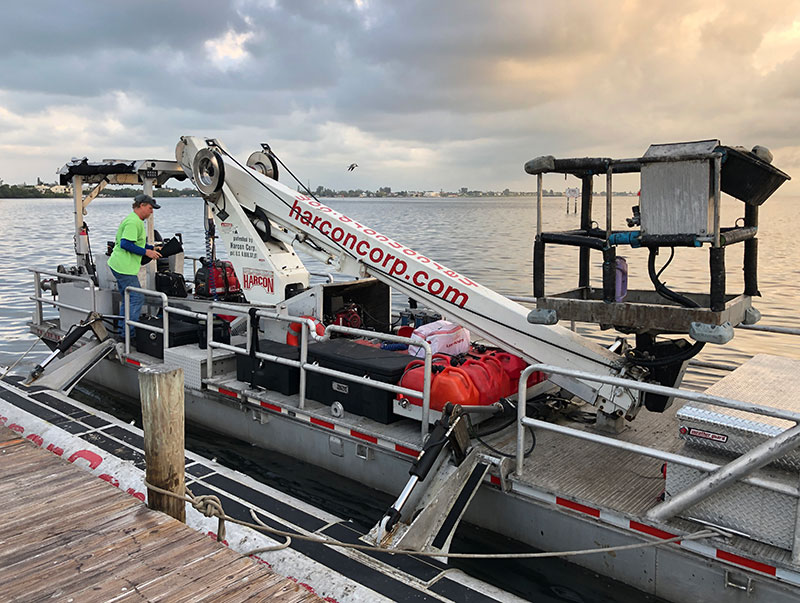 Eric Clark, an employee with Harcon Corp., prepares his boat March 27 for a day of work at the Anna Maria Island Bridge. Islander Photo: Lisa Neff 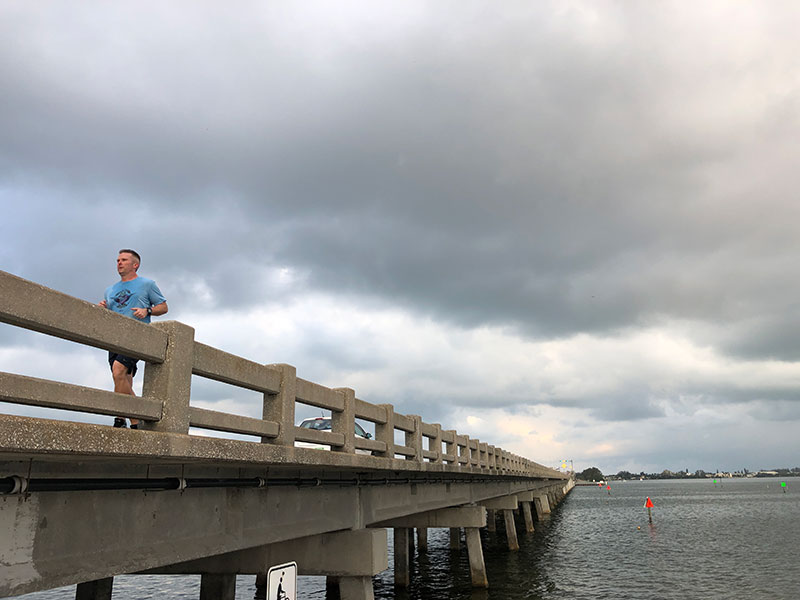 Traffic — motorized and nonmotorized — travels early March 27 on the Anna Maria Island Bridge. A routine inspection, followed by routine maintenance, took place the week of March 25 but did not disrupt traffic.

Eric Clark powered up the Harcon bucket boat early March 27 for a day of work under the Anna Maria Island Bridge.

Clark works for Harcon Corp, a bridge access service subcontracted to assist on the Florida Department of Transportation’s spring inspection and maintenance of the Anna Maria Island Bridge the week of March 25.

As Clark awaited the arrival of the work crew to the Kingfish Boat Ramp in Holmes Beach, captains departed from the ramp with fishing boats holding charter groups of four or five people.

Near shore, a man sold bait by the bucket from a pontoon boat.

A kayaker paddled past.

On the horizon, the Sunshine Skyway Bridge was golden in the day’s first hour of sunshine.

“It has its moments,” Clark said of his work — or his workplace.

About 20 minutes later, storm clouds rolled in, rain blew sideways and a waterspout formed in the Gulf and moved east, toward the shore.

Then, in the time it takes rain-soaked hair to dry, the skies cleared and work-worthy weather returned.

March 27 and March 28 were maintenance days on the drawbridge connecting Anna Maria Island and Perico Island on Manatee Avenue/State Road 64.

March 25 and March 26 had involved an inspection of the drawbridge’s underside, according to information from DOT spokesman Brian Rick.

Similar work — intended to ensure the safety of the structures — was set to take place the week of April 1 on the Cortez Bridge.

“The traveling public will not notice anything going on,” according to Rick. The custom lift on the Harcon boat allowed for close inspection without closing the bridge.

The DOT eventually plans to replace both drawbridges with fixed high-span bridges, but construction funding has not been budgeted for either project.

A third bridge to the island, the Longboat Pass Bridge between Bradenton Beach and Longboat Key, will undergo extensive repairs May-November. The DOT has said the repairs will occur overnight.

One thought on “Island bridges get routine checkup”