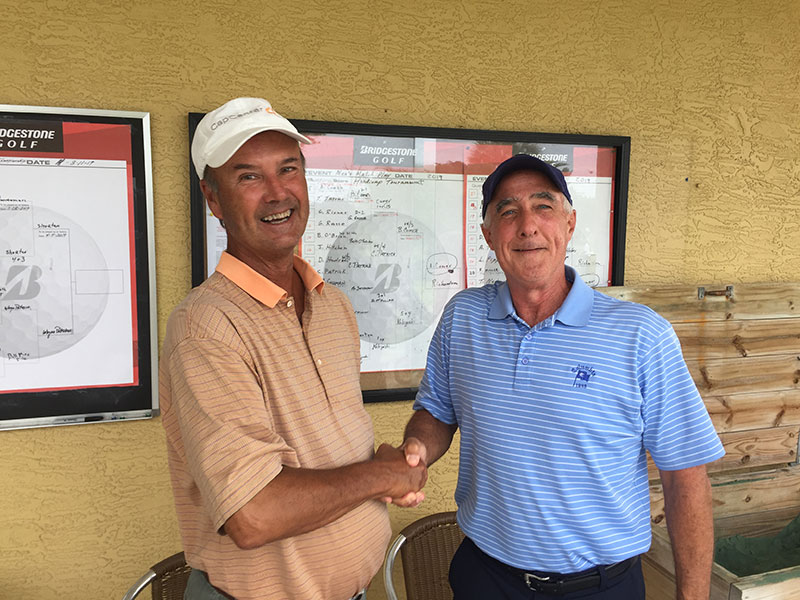 And we have a winner.

The winter-spring season of golf at the Key Royale Club in Holmes Beach was punctuated with the finals in the men’s match-play tournament, which began with 38 golfers five weeks ago.

The championship match March 31 pitting Brian Comer and Dave Richardson went down to the wire.

After a back-and-forth battle, Comer was crowned the Key Royale match-play champion after earning an exciting overtime 1-up victory at the 19th hole.

Last week saw Dick Mills take the prize in the President’s Cup tournament at the KRC.

In regular golf action last week, the men played their weekly modified-Stableford system match April 1 and saw a trio of players, Larry Pippel, Lary Solberg and Dave Richardson, each card a plus-4 to finish in a tie for first place.

Pippel and Solberg teamed up with John Hedges and Art McMillan to win the team competition with a combined score of plus-8.

The women took over the course April 2 for a nine-hole individual-low-net match in four flights.

Phyllis Roe rode a birdie on the second hole to capture the top spot in Flight A with a 1-under-par 31, one stroke ahead of second-place finisher Pam Lowry. MaryLou Dreier and Helen Pollock finished in a tie for third with matching 1-over-par 33s.

Cathy Rice fired a 1-under-par 31 to take first place in Flight B by two strokes over Meredith Slavin, whose 1-over-par 33 put her in second place. Gloria LaDue and Carol Patterson followed with 2-over-par 34s.

Pam Alvord and Jana Samuels both fired 2-under-par 30s to finish in a tie for first place in Flight C that was broken after a card-off tiebreaker that saw Alvord win the flight. Sue Wheeler was alone in third with a 1-under-par 31.

Marty Clark was the outright winner of Flight D after a 1-under-par 31 that left her two strokes clear of the rest of the flight. Markie Ksiazek led a trio, including Susan VanOrsdel and Janelle Clements, to finish at 1-over-par 33.

The men were back on the course April 4 for a nine-hole “shamble,” a challenge for a foursome to play their second shots from the spot of the best drive and finish with their own shots from there.

The team of John Cassese, Mike Gillie, Lex Halakan and Art McMillan combined on a 1-under-par 31 to earn clubhouse bragging rights for the day. The team of Jerry Elson, Tom McDonnell, Dick Mills and Terry Tarras matched the even-par 32 carded by the team of Gary Alvord, Tim Friesen and Blake Ress to tie for second place.