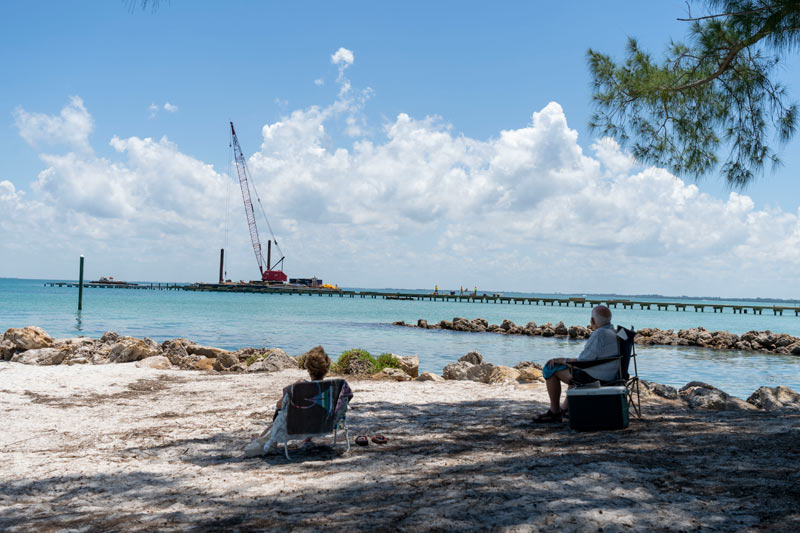 Grace Ankers, 82, left, sits next to her husband, Tony, 85, May 21 as they watch construction on the new Anna Maria City Pier. Islander Photos: Cory Cole 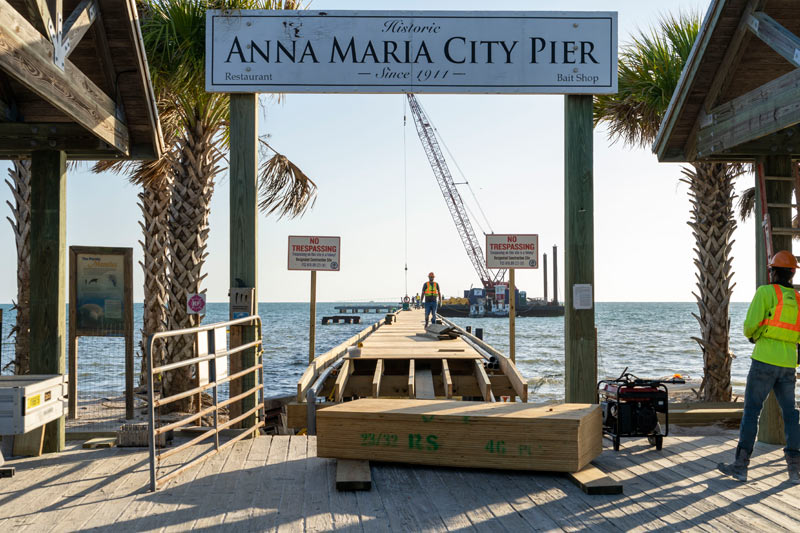 Workers walk across plywood placed to facilitate construction and safety on the Anna Maria City Pier May 24. The installation of the IPE planks is yet to come.

Passersby looked on with anticipation the week of May 20 as the Anna Maria City Pier took shape one slat at a time.

That week, i+iconSOUTHEAST was installing pipes, to carry water, gas, communication and electrical lines under the pier decking.

Day after day, people approached and asked questions of anyone wearing hard-hats, just trying to cure their curiosity.

Mayor Dan Murphy said May 24 that work on the pier was going smoothly with no current delays.

The next step Murphy has planned is selecting the contractor for the construction of the restaurant and bait shop at the T-end of the pier. Bids for the work were due May 20.

Murphy met with the bidders individually May 24 to learn their plans for building the restaurant and bait shop.

The information gained will help set a timeline for installation of the ipe decking, according to Murphy, who wants to make sure the material is not damaged by construction work on the T-end.

“If you want a view, this is the pier,” Brad Bernardo said, from his lawn chair at Bayfront Park.

Bernardo, 53, of Bradenton, just finished enjoying an ice cream cone on the beach May 22. He had been visiting the pier with his family for about 20 years.

He said the pier was a great place to spend time with family, enjoy a view, fish or eat ice cream while walking the boardwalk.

Bernardo and many people look forward to the completion of the new pier.

“We would go to Two Scoops and then walk the pier,” Tony Ankers, 85, said.

Ankers and his wife, Grace, 82, were relaxing May 21 at the south end of Bayfront Park, adjacent to the Lake LaVista Inlet in Anna Maria — where they had a view of the progress on the pier.

The couple is from Welshampton, a small town located in Shropshire county in the United Kingdom. The Ankers visited for 30 years and, in 2001, purchased property here.

“We were upset when it vanished,” Grace Ankers said of the pier.

For the Ankers, visiting the pier was a part of their routine. Now they go to Bayfront Park and sit by the water and watch the construction progress on the new pier.

They are anticipating its completion and the day they will savor their ice cream and walk the pier again.

Murphy expects construction on the bents to be completed the first or second week in June.

Regarding the overall completion, Murphy explained the materials are all here. However, the weather will play a major role in the timeline.

The mayor plans the completion of the walkway and T-end by the end of the year.