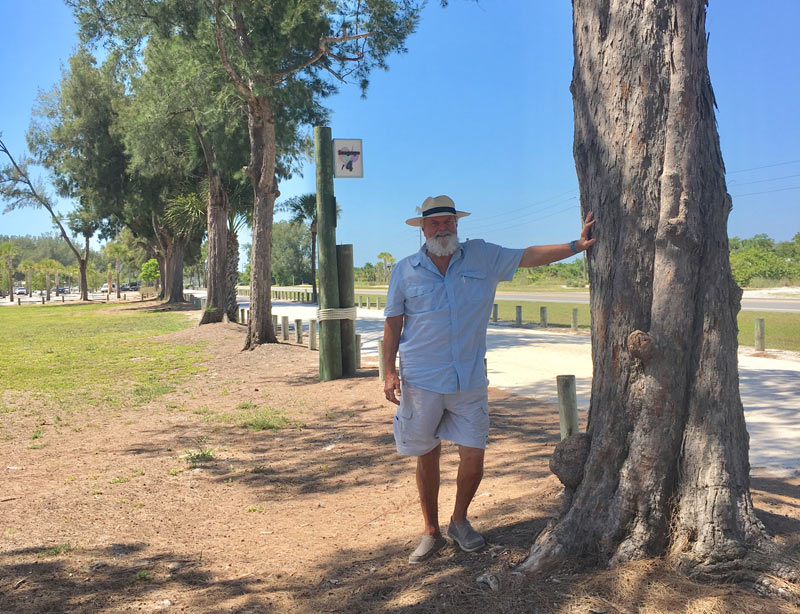 Bradenton Beach resident Mike Norman stands May 24 next to one of more than 100 Australian pine trees targeted by Manatee County for removal at Coquina Beach as part of a drainage improvement project. Norman alerted the city and urged the commission to save the trees at an emergency meeting called by the mayor. Islander Photo: Ryan Paice

The planned removal of more than 100 pine trees at Coquina Beach in Bradenton Beach united people in opposition.

Bradenton Beach commissioners voted 4-0 May 24 to write to Manatee County administrator Cheri Coryea protesting the county’s plan to remove the Australian pine trees at Coquina Beach to make way for a drainage improvement project. Coquina is within the city limits, although the park is operated and maintained by the county.

Commissioner Randy White was absent without excuse from the emergency meeting called by the mayor.

Mayor John Chappie said the letter would inform the county that the trees must be saved and invite county officials to a city commission meeting within the coming weeks to explore alternatives for the trees.

The county hired Bradenton-based Woodruff and Sons in January for the drainage improvements at Coquina Beach, where the parking lots flood during heavy rains.

The project involves installing a pipeline and drainage system under parking, then laying pervious concrete for the beach access road and parking lot.

Woodruff is presently working at the south end of Coquina, progressing to the north end. The deadline to complete the work is Jan. 19, 2020.

Eric Epler, project manager for Woodruff, said in a May 23 interview with The Islander that the Australian pine trees at Coquina are an issue as a 10-inch-deep excavation is needed for new curbing on the road and that would harm the trees, leaving them in a dangerous condition.

“They have substantial surface roots,” Epler said. “We’re going to be impacting those roots and, when we do that, the trees are either going to die and topple, or a heavy wind is going to come and — when you take out half or more of the surface roots — topple the trees.”

Epler said there is no plan to replace the trees.

Chappie said the county did not notify him of the tree removal when it sought permission for the drainage project.

Chappie and Commissioners Jake Spooner and Ralph Cole said Bradenton Beach resident Mike Norman informed them about the issue when he called them May 23.

Norman also attended the meeting, speaking against the tree removal.

“I think the trees should be the guiding light for anything done down there. Anything. Nothing should be done that would kill any of these trees,” Norman said in a May 24 interview with The Islander.

Norman said the city should demand the county re-engineer the project to keep the trees. He added that he wouldn’t be satisfied with replacements, saying no tree could replace the Australian pine trees, some of which stand more than 50 feet tall and provide much-needed shade for the area.

“The other thing is everyone parrots the same company line about Australian pines,” Norman said. “All bureaucrats say the same thing: ‘They’re shallow-rooted, dangerous, they can fall down, and nothing can grow under them.’

“That’s the party line and it has been for years. And people don’t think. They just go along,” he continued.

If the curbing can’t be re-engineered, Norman said the county should only remove the trees on a need-to basis, keeping as many as possible.

Norman added that he spoke May 23 with County Commissioner Carol Whitmore, who said the county commission also was not informed of the plan to remove trees.

“I think there was an effort to keep people in the dark,” Norman said. “Especially out here because if you asked 100 people on this island what they thought about killing over 100 trees in Coquina, they would all be horrified.”

Chappie called Coryea May 24 and asked the county to hold off on removing the trees. The mayor said Coryea guaranteed no trees would be removed the coming weekend — May 25-May 26.

Also, according to Chappie, Coryea plans to raise the tree issue at the county meeting May 28.

Spooner said the city must get the county to pump the brakes and find alternatives to removing the trees.

“This place is one of the most beautiful places on the coast of Florida,” he said,

He suggested rallying the public.

Cole motioned for Chappie to write to Coryea with the city’s demand and Spooner seconded the motion.

The Manatee County Board of Commissioners voted 7-0 May 21 to approve a consent agenda that included a change order from Bradenton-based Woodruff and Sons for the Coquina Beach drainage improvement project. The change increased the contract amount from $2,426,774.90 to $3,017,417.01, and extended the construction deadline 72 days.
Eric Epler, project manager for Woodruff, said the county underestimated the amount of materials needed for the project and the change order corrects the county’s mistake.
The new deadline for the completion is Jan. 19, 2020.