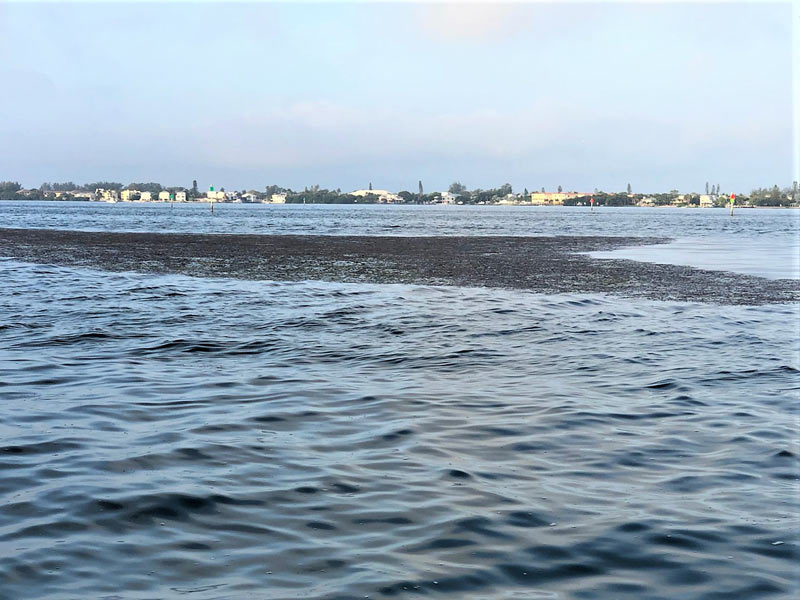 Capt. Scott Moore shot this photo of a blanket of brown algae floating in Anna Maria Sound May 17 just north of the Anna Maria Island Bridge and Manatee Avenue. 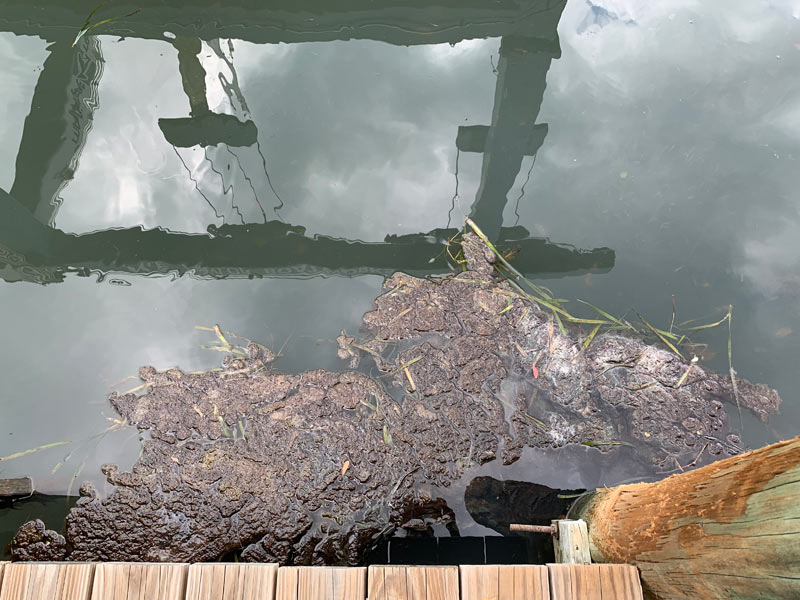 “The scientists can talk, but they are not out here on the water 200 days a year. It’s the worst brown drift algae I’ve ever seen here.”

So says Capt. Scott Moore, who has been fishing Sarasota Bay and the waters of Anna Maria Island for almost 40 years. He knows what should and should not be here.

According to Moore, Lyngbya wollei, the scientific name for the brown algae, is rare in such large concentrations.

“We get this brown drift every spring — some call it gumbo — but not like this. It’s common in small doses,” Moore told The Islander May 17. “But this has been horrific.”

Moore has his theory on the algae: nutrients.

He pointed to all the dead sea life that sank and decomposed in the Gulf of Mexico and the bays during the red tide of 2018.

“It all just ferments at the bottom, makes all those nutrients as it decomposes and then feeds algae, such as the brown drift, and we get this huge bloom that rises,” Moore said. “Eventually, it all sinks again, but not before the smell, and it can take the oxygen levels in canals down to zero.”

Larry Brand, a professor of marine biology and ecology at the Rosenstiel School of Marine and Atmospheric Science at the University of Miami, is an expert on red tide, but he hasn’t really weighed in with much concern for the recent brown drift that first became apparent near Fort Myers.

“My colleagues identified it. It first started appearing down around Lemon Bay and Cape Coral. Excess nutrients are what causes HABs — harmful algal blooms — and this is another one,” Brand told The Islander May 15.

“There are hundreds of algae constantly competing for nutrients. Sometimes the toxic algae, such as red tide, win out, and we have a big bloom like the one that just passed. Other times, the non-toxic algae dominate, and we don’t even notice them,” Brand said.

Brand said he is not aware of any massive spill or other event that might have dumped a large quantity of nutrients into Southwest Florida waters.

“People don’t want to come in contact with this algae,” he said. “Eventually, it produces gas bubbles and sinks back down. It’s the surface winds that move it around.”

Fran Derr and her neighbors in the Key Royale community of Holmes Beach were happy the algae there had begun to dissipate.

“We have a group of neighbors that walk,” Derr said, and they called attention to the HAB. “The smell was horrendous for a few days, but it seems to have cleared out,” she reported May 16.

Kelly Richmond, communications lead for the Florida Fish and Wildlife Conservation Commission, said the brown algae is a brackish water type and that the Florida Department of Environmental Protection began testing samples May 9 in Holmes Beach. The DEP had earlier identified the bloom as Lyngbya wollei, a cyanobacteria, or blue-green algae, that can cause skin irritations, damage beaches and impair habitats.

The good news on the drifting brown gumbo?

Moore says it will disappear.

“It always comes in the spring. By mid-summer, it’s gone historically,” he said.

Locals still recovering from the effects of the red tide bloom the stretched into January 2019, are hopeful there won’t be a repeat.

The effects of red tide first appeared on Anna Maria Island in August 2018 and eventually stretched as far north as the Florida Panhandle before it subsided.

FWC samples turned up very low concentrations of red tide — less than 10,000 parts per liter — May 13 during routine testing at the Coquina Boat Ramp in Bradenton Beach.

At such low concentrations, red tide is not apparent in the water — no dead fish and no human irritation.

The low-level algae report was the only positive sampling along the Southwest Florida coastline at press time May 20.

Brand said there is no way to predict red tide. He maintains development of another red tide bloom is tied to ocean currents.

“If the loop current in the Gulf of Mexico is in the southern position, historical data shows no red tide occurring. On the other hand, if its farther north, it’s a better chance,” Brand said.

For now, Moore continues to take anglers to fish in the waters surrounding Anna Maria Island and hopes officials will take measures to help stop growth of red tide and brown algae.

“It’s been proven aerators work to help stop algae. The bubbles mess with the algae growth. Aeration systems installed at the mouths of our canals could help keep algae out of our waterways and improve the overall health of our waters,” Moore said.

DEP weighs in on brown algae

In an email from the Florida Department of Environmental Protection, Dee Ann Miller included information about brown algae, which was recently observed in Manatee County waters:

“The cyanobacteria sampled in Manatee County are found worldwide and are a natural part of our freshwater, brackish and marine environments in Florida.”

The email said algae typically increases in the spring and summer months, when water temperatures and daylight hours increase.

They are photosynthetic organisms and, like plants, convert sunlight into energy, using nutrients from their environment.

Higher levels of nutrients can lead to higher levels of growth. As it floats and begins to decay, the alga can emit a foul, rotten egg odor from the production of gas and organic breakdown.

The DEP advises people to avoid contact with algae and stay out of the water if a bloom is visible.

However, not all alga is harmful to humans or marine life.

People are encouraged to report blooms to the DEP hotline at 1-855-305-3903 or online at floridadep.gov/dear/algal-bloom.