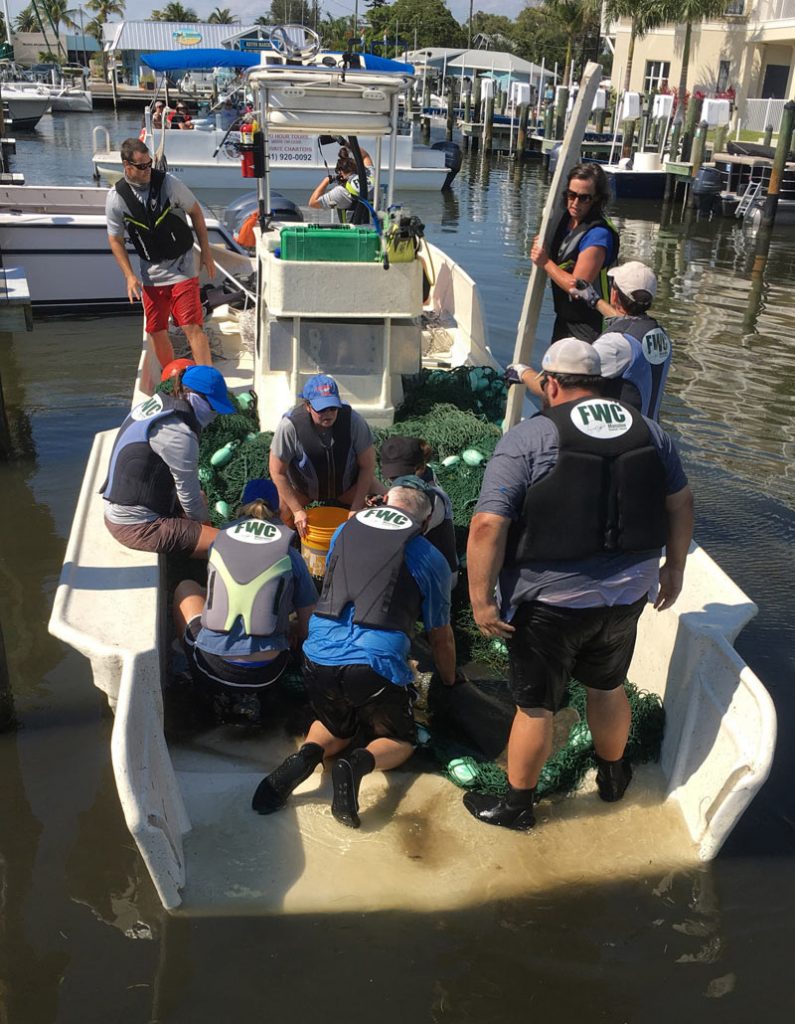 FWC and Mote corral an ailing juvenile manatee in the basin at the Waterline Marina, Holmes Beach, load it on an FWC manatee rescue boat and whisk it to Tampa Zoo for evaluation and treatment. Islander Photos: Gillian Kendall 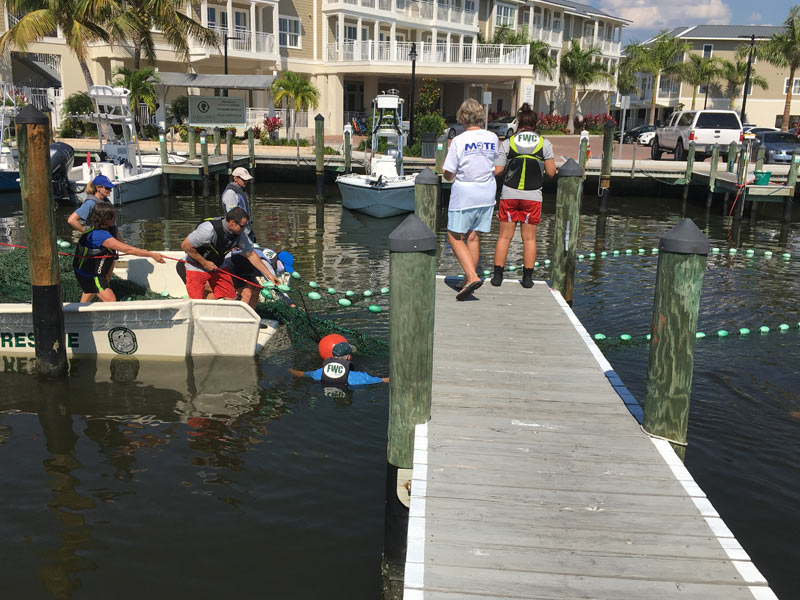 A FWC manatee rescue team and representatives from Mote load and prepare a juvenile manatee May 17 on the FWC boat for transport to Tampa.

By Gillian Kendall, Special to The Islander

A juvenile manatee in distress was rescued May 17 from the basin on Marina Drive in Holmes Beach.

The ailing marine mammal had been spotted by Steve Ryan of Cincinnati, a guest at the Waterline Marina, Resort and Beach Club, 5325 Marina Drive, Holmes Beach.

Ryan went to the hotel reception desk for help, where supervisor Giselle Brock phoned the hotline for Mote Marine Laboratory in Sarasota.

Brock passed her phone to another employee, an engineer, who went outdoors to keep track of the animal’s location. “Danny has the kindest heart,” Brock said. “I knew he would help.”

Among the docks in the marina, a small crowd gathered, watching for air bubbles. The manatee was alive, but barely moving, it’s head surfacing only occasionally to breathe.

Meanwhile, in St. Petersburg, Andy Garrett, manatee rescue coordinator for the Florida Fish and Wildlife Conservation Commission, had been getting calls and texts. “We were hearing about a small, lethargic animal with a weird lesion, which didn’t seem to be acting right. We got photos and we agreed it was emaciated.”

Garrett gathered a team for the rescue.

“We had seven FWC people there and three from Mote got there, too. When we got there, we split up. Two guys, a volunteer named Tim and one of our biologists, Sean Tennant, went in the water,” Garrett said.

The two men stood chest-deep in the murky brown water as the team put a large net with floats in the water. “We looped some net out away from the boat slip and had the two swimmers kind of corral it into the net,” said Garrett. “They just gently encouraged it to go where we wanted it to go.”

Within a few minutes, the net surrounding the manatee was hauled in gently but rapidly, allowing the manatee to be lifted aboard the FWC boat, which then quickly departed.

Onboard, a worker poured buckets of water over the manatee to protect its skin and encourage it to breathe, Garrett said.

They young manatee was on its way to get help.

Despite the team’s best efforts, Garrett said he could not predict the eventual outcome. “I don’t know what’s going on with that manatee; it’s in bad shape. It’s about a six-and-a-half-foot male, probably a few years old at most.

“It had some other lesions. In one area it looked like the top layer of skin was missing; it has a weird, almost cut look to it. I didn’t get a whole lot of time to look at it. We got going as soon as we got the animal back in our boat.”

After they landed the boat, they took the manatee to Zoo Tampa at Lowry Park in Tampa.

Garrett said it looked as if a layer of skin was missing. “If it was a disease you’d expect the edges to be necrotic, but this was so clean-cut. We’re hopeful Zoo Tampa can figure out what’s going on.”

At Zoo Tampa, Garrett said, the staff will draw blood and look for infections. “If it’s underweight, which this one seems to be, they may try to hydrate it with fluids and give it some antibiotics.”

The overall goal, he said, is to rehab the manatee to go back out where it was found.

Garrett said his team handles about 100 stranded manatees a year. The calls for help are irregular and come from all over the state.

“We can go weeks without anything happening, or sometimes it’s more frequent.”

Once an animal is identified as requiring assistance, Garrett said, “we want to make sure we have a safe plan — it can be dangerous.” Manatees can weigh more than 1,000 pounds.

“Human safety comes first, and then the animal safety is very important as well. This rescue was a lot safer because the animal was small and thin and not likely to give us trouble,” he said.