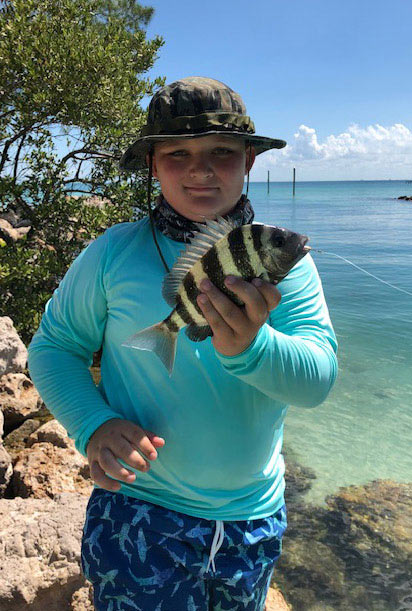 Levi Knight, 9, of Winter Spring, shows off his sheepshead, caught May 22 using live shrimp as bait on an incoming tide at the inlet near the construction site for the new Anna Maria City Pier. 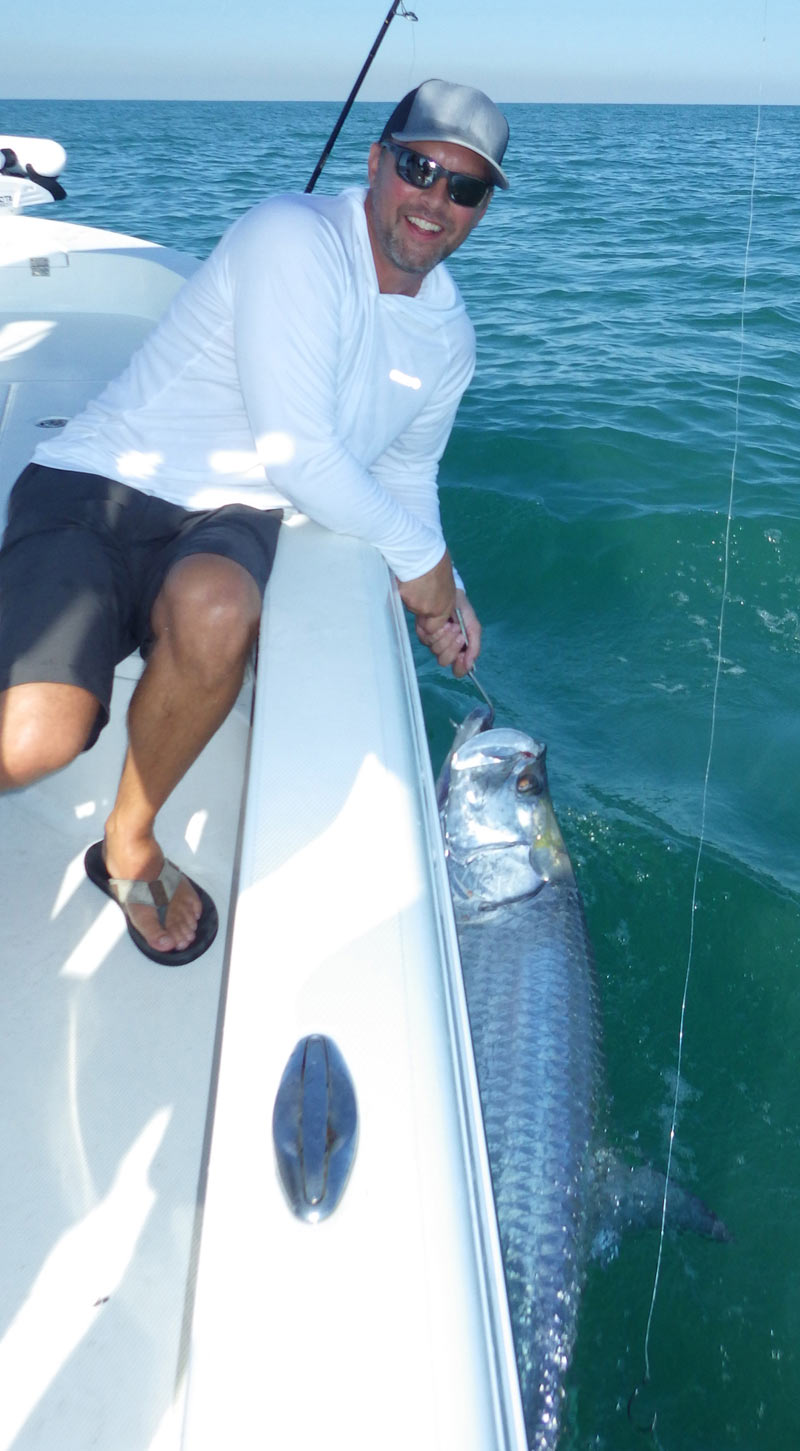 Ehren Hietalati, visiting Anna Maria Island from Alaska, shows off his first tarpon May 20. It was hooked on a pass crab and weighed about 80 pounds. Ehren landed — and released — three out of six silver kings on his charter fishing trip with Capt. Warren Girle.

Maybe the influx of lovebugs indicates love is in the air, but another special event is occurring. And who doesn’t love tarpon season?

With Anna Maria Island falling into a consistent warm weather pattern, the tarpon are arriving in encouraging numbers. Large schools are being sighted, especially along the Gulf beaches, in the passes and around Egmont Key.

If you desire to test your strength against the silver king, it’s time to gear up, go out and pay your dues. We should see excellent tarpon fishing for at least the next few weeks, giving you ample time to get out there. For bait, live crabs and threadfin herring are working well, but don’t be afraid to cast shiners and pinfish into the mix, too.

Fishing early morning tides is providing good action for now, but when you see those strong outgoing afternoon tides, make sure you get on the boat. Fishing live crabs on these tides in the passes can be some of the best tarpon fishing you’ll experience, so don’t miss out.

On my Southernaire charters, I’m hiding in the back country among the mangroves and shallow grass flats of Terra Ceia Bay. Catch-and-release snook action is going strong with morning trips yielding 20-40 snook in just four hours of fishing. Catch-and-release spotted seatrout are being caught with some regularity. Most catches are slot-size, which are worthy of bending a rod.

Fishing around oyster bars is providing some catch-and-release redfish action, although the bite is sporadic. I’m mostly seeing reds being caught while targeting snook.

Capt. Warren Girle’s anglers are having success bringing tarpon to the boat in both Tampa Bay and the Gulf of Mexico. He says casting live crabs and threadfin herring to the schooling fish is working to get a bite. Fish 60-100 pounds is the norm, with bigger fish in the mix.

Meanwhile, moving to nearshore structure is yielding mangrove snapper and Spanish mackerel for Girle’s anglers. For the mangrove snapper, bottom rigs with the addition of a live shiner are performing well. As for the mackerel, just a free-lined shiner and a longshank hook will do.

Jim Malfese at the Rod & Reel Pier says anglers there are targeting catch-and-release snook, which are plentiful. Live baits — pinfish, shiners, ladyfish or mojarras — will attract these pier-dwelling linesiders. Pier fishers opting to use live shrimp are hooking into a few sheepshead, as well as keeper flounder and catch-and-release redfish.

Capt. Aaron Lowman is finding good action on catch-and-release snook throughout Tampa Bay. Fishing shallow flats where mangrove shorelines exist is proving to be good for Lowman’s clients on the higher tides. During low tides, Lowman is targeting oyster bars and potholes. Fishing deeper water in Tampa Bay is producing action in areas where rock piles or hard bottom are found. He’s putting clients on macks, jacks and plenty of blacktip and spinner sharks.

Lastly, fishing in the Gulf of Mexico is host to a variety of species, including tarpon, permit, cobia and a few mangrove snapper, which readily take a baited hook.

Capt. Jason Stock is targeting tarpon along the Gulf beaches of Anna Maria Island, the pass at Bean Point and around Egmont Key. Live bait presentations — threadfin herring, large shiners and crabs — are yielding plenty of action. Silver kings of 80-100 pounds are the norm.

Moving offshore, Stock is putting clients on a variety of snappers, including mangrove, yellowtail and mutton. Also while offshore, Stock’s clients are hooking up with permit and goliath grouper.

Capt. David White of Anna Maria Charters also is pursuing tarpon along the beaches and passes. Live crabs and threadfin herring are his go-to baits. Casting into schooling tarpon is resulting in fish 80-100 pounds and he says, bigger, every so often. Other inshore fishing for White’s clients include catch-and-release snook and redfish, with both eating live shiners as bait. Casting flies to these fish is working for White’s more determined anglers.

Lastly, macks and mangrove snapper are taking the hook around inshore structure, where White is finding a few flounder in the mix.