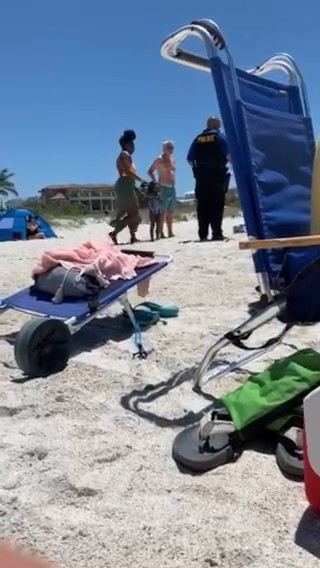 A new policy in Holmes Beach in response to irate beachgoers will require police officers to consider a different tack when they see tents on the beach.

An incident April 22 involving a Holmes Beach police officer and a family with a tent on the beach in the 3600 block of Gulf Drive triggered the policy change.

Jennifer Lisi of Bradenton and nephew Harrison Stewart of New Jersey complained that the police officer twice asked the family to either remove the tent or leave the beach.

Stewart recorded the incident, which also showed other beachgoers protesting the officer’s request.

Lisi named HBPD Sgt. Michael Pilato in her April 22 email to The Islander.

She said the officer was patrolling on an ATV.

“During this time there were many other families with tents along the beach, but only this family was told to remove the tent,” Lisi continued.

She said Pilato’s indicated the tent interior could not be viewed from all sides.

“This is, in fact, incorrect, as the tent did not have a cover over top and the inside was clearly visible from the outside of the tent,” she wrote.

Lisi noted the officer did not take action regarding other tents on the beach.

“The family, in the end, left the beach with no physical confrontation,” she wrote. But she claimed the incident was a “racial-motivated confrontation.”

“It’s a drag. Holmes Beach prides itself on being racially diverse,” she added.

Titsworth and Police Chief Bill Tokajer discussed the complaint relayed by The Islander, leading to an email from Tokajer to employees in his department.

“We find the intent of the county ordinance prohibiting tents on the beach is to prevent people from doing things that violate our ordinances, like hiding alcoholic beverages, drugs, grills, inappropriate adult behavior or pets on the beach,” Tokajer wrote.

The chief also announced: “In the future, it will be our policy, if you see a tent on the beach that is being used for shade and not for the hiding of the improper activities you will take no action.

Holmes Beach police use the county ordinance as a tool to dislodge the homeless and people who violate ordinances that prohibit sleeping overnight, fires, cooking and digging on the beach.

Section 54-12 states: “Being in a tent, hut, lean-to, shack or in a temporary shelter or being asleep atop or covered by materials in a public place or private place out-of-doors without the permission and consent of the city or the property owner may be evidence of a violation but is not alone sufficient to constitute a violation of this section.

The ordinance also states for probable cause to issue a summons or make an arrest, the officer must find numerous personal belongings, evidence of a fire or cooking activities, proof of digging or earth breaking activities or a person is asleep and “when awakened states he or she has no other place to live.”