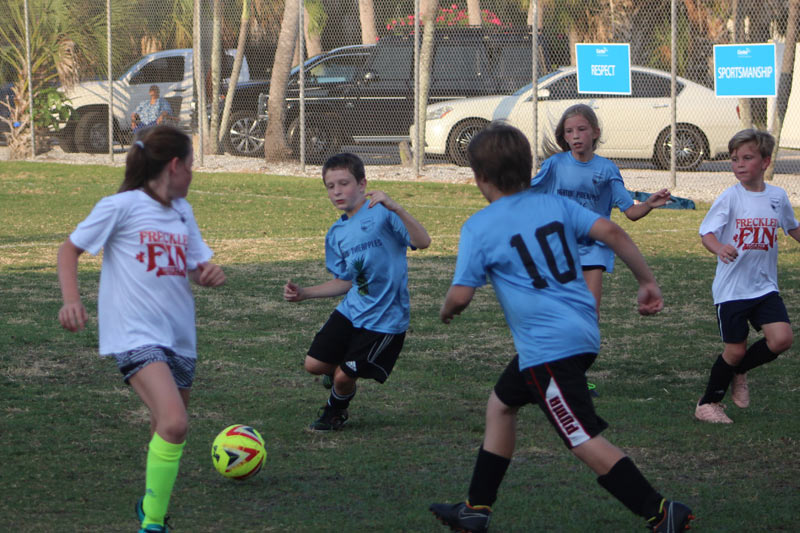 All eyes are on the soccer ball May 20 as Beach House Realty’s Brady Thompson and Jack Whiteside converge on the ball with Freckled Fin’s Taylor June King and teammates looking on during the 8-10 division championship match at the Center of Anna Maria Island in Anna Maria. Islander Photo: Kevin P. Cassidy 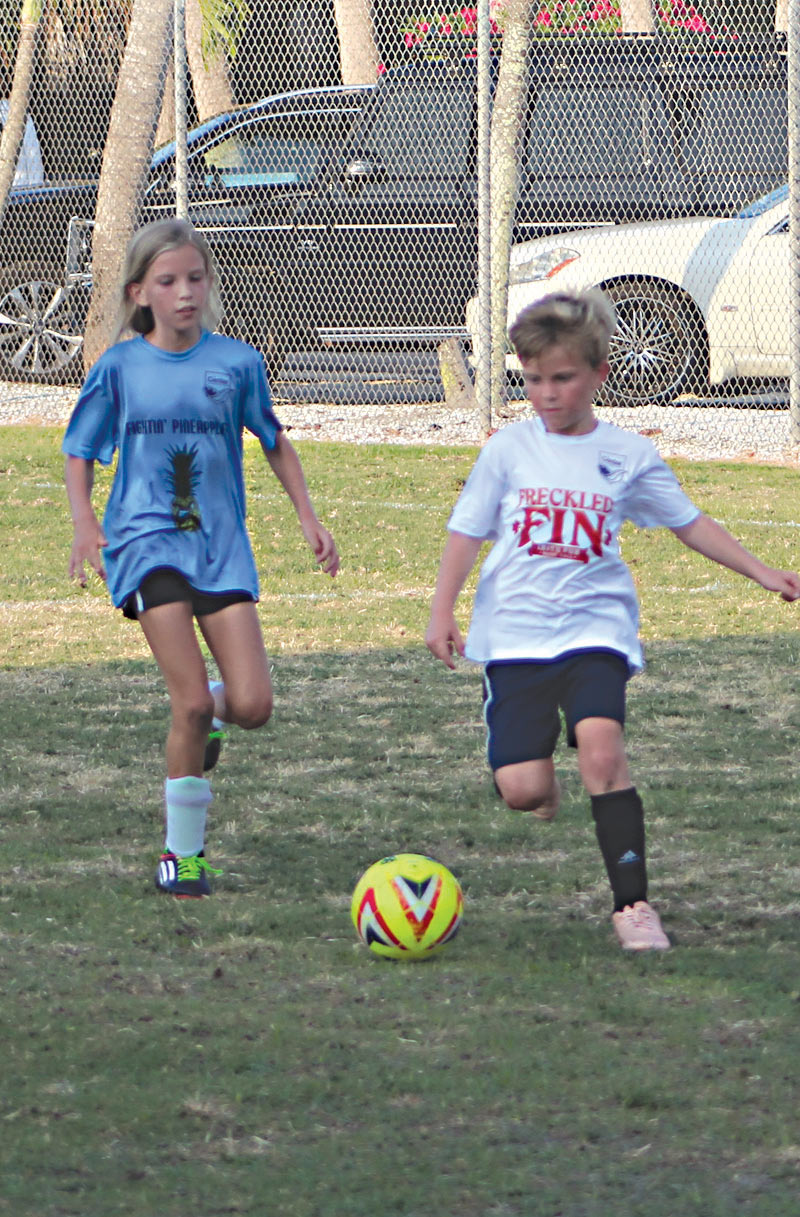 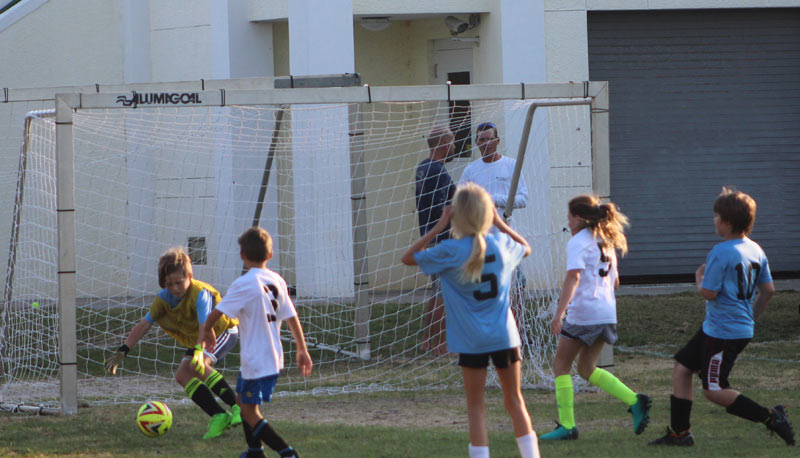 Beach House Real Estate goalie Magnus Rollins makes a save in the box just before Connor Nixon arrives during the 8-10 championship match May 20 at the center. Islander Photo: Kevin P. Cassidy

Another youth soccer season has come to a close at the Center of Anna Maria Island. Champions were crowned May 20 in the 8-10 and 11-15 divisions and individual awards were doled out to some deserving players.

The 8-10 division championship game May 20 was preceded by the third-place consolation game between ACE Hardware and Ugly Grouper. The two teams battled to a 1-1 tie, sending the game to a penalty-kick shootout.

Ugly Grouper prevailed as Savanna Coba and Alexander Teich came through under pressure to make their penalty kicks for Ugly Grouper.

Jack McCarthy was the lone ACE player to convert a penalty kick for a 2-1 Ugly Grouper victory.

The championship game looked like it could go to penalty kicks as well, but two goals by Dennis Gallagher helped Beach House Real Estate overcome a 1-0 deficit. Led by Jack Whiteside, Kate Stembridge and Brady Thompson, the Beach House defense stayed strong in front of goalie Magness Rollins, who made six saves for a 2-1 victory over Freckled Fin.

Other members of the 8-10 champs are Julia Baugher, Eve Otto, Cyrus Ryan and Cala Ryan.

Duncan Cloutier scored the lone goal for Freckled Fin, which also received 11 saves from Cale Rudacille in the loss.

The 11-15 championship game also was a nail-biter as the teams battled to a 0-0 draw, but CABB Cleaning prevailed 4-2 in the penalty shootout behind goals from JM Feeney, Connor Samblis, Sam Liester and Travis Bates, who notched the game-winner. Other members of CABB Cleaning are Fox Dalton, Emerson Gitt and Evan Talucci, who helped keep CABB in the game with 13 saves.

Congratulations to all of the players, coaches and fans.

After five weeks of action, the haves and the have-nots are telling the story for the adult soccer league at the center.

Gulfview Windows and Doors with a spotless 5-0 record appears to be the class of the league. Jiffy Lube is on the heels of Gulfview with a 3-1 record, followed by Ross Built and Flynn Law — tied for third with 3-2 records.

Blalock Walters and Sato Real Estate are tied for fifth place with matching 2-2-1 records, while Duncan Real Estate holds down the seventh spot with a 2-2 record. Solid Rock Construction at 2-3 is in eighth place followed by 1-4 Beach House Real Estate and 0-5 Moss Builders.

Action May 23 kicked off with Solid Rock edging Sato 5-4 behind two goals each from Yuri Pereira and Eric Pullen. Ryan Hogan added a goal and Zachary Long made 10 saves in the victory.

Beach House defeated Ross 4-2 behind two goals from Adam Bujarski and a goal each from Nick Bouchard and Ryley Moore. David Greene helped preserve the win with 10 saves in goal.

Vince Circharo scored both goals and John Haggerty made 10 saves for Ross Built in the loss.

Gulfview received goals from five players as it outscored Blalock Walters 7-5. Jose Urbiola Bolanos and Keith Mahoney led the way with two goals each, while Ashley Friszman, Ryan Moss and Aaron Parkin notched goals for Gulfview, which received 13 saves from Jordan Demers in the win.

Matt Skaggs scored four goals and Greg DeMeuese added a goal and an assist to lead Blalock Walters, which received 10 saves from Dan Van Etten in the loss.

The final match of the night was another high-scoring affair. Flynn Law defeated Moss Builders 9-5 behind four goals from Kevin Roman and three goals from Tyler Robinson. Lexi Sato chipped in with a goal and two assists and Olaf Krause also scored. Mark Rudacille closed out the victory with 11 saves.

Diego Felipe and Damir Glavan scored two goals each to lead Moss in the loss, along with a goal from Amy Ivin and assists from Dimitir Maramenides and Nate Talucci.

Golf action at the Key Royale Club in Holmes Beach got started May 20 with the men playing a modified-Stableford system match over nine holes. John Kolojeski paced the group with a plus-3 to edge Scott Hill and Terry Tarras by a point.

The women were out May 21 for a nine-hole, individual-low-net match in two flights.

Sharon Tarras fired a 3-under-par 29 to take first place in Flight A over Margrit Layh, Jana Samuels and Jean Holmes, who all carded even-par 32s to tie for second place.

Roxanne Koche torched the course to the tune of a 6-under-par 26 to win Flight B by three strokes. Janet Razze, Sue Wheeler and Ellen Boin all shot respectable scores of 3-under-par 29, but it wasn’t enough on this day.

The team of Ron Buck, Marty Hicks, Art McMillan and Tom Nelson combined on a 7-under-par 25, one stroke off the club’s record low score during the May 24 men’s scramble. The team of Jim Auch, Herb Clauhs, Scott Mitchell and Ken Nagegas tied the team of Jack Lowry, Sam Major and Jeff Rodencal with a score of 4-under-par 28.

Four teams emerged from pool play with 2-1 records and battled for the day’s supremacy during May 22 horseshoe action at the Anna Maria City Hall horseshoe pits.

The first semifinal saw Jerry Disbrow and Sam Samuels shut down Neil Hennessey and Jay Disbrow by a 21-6 score. Gary Howcroft walked his way into the finals with a 25-15 victory over Hank Huyghe and Tom Skoloda. The finals saw Howcroft rally from a 20-14 deficit to a 23-20 victory.

Tim Sofran was the outright champion of the May 25 games after posting the lone 3-0 record during pool play.