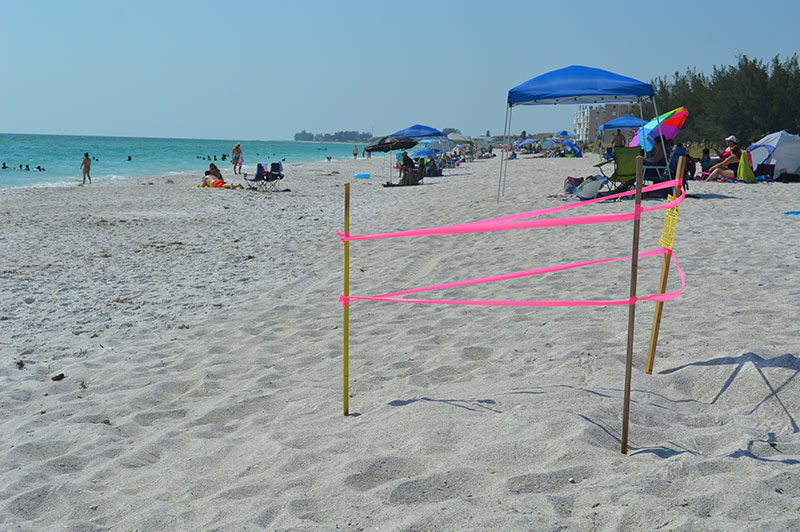 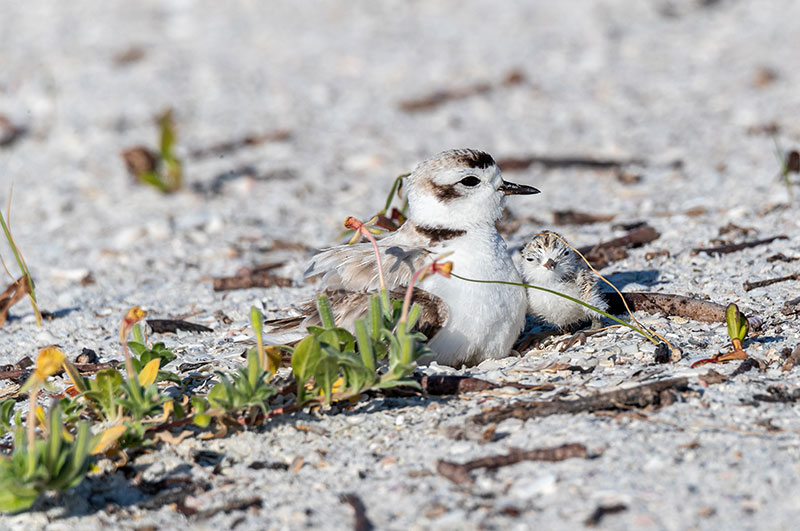 One of two snowy plovers documented on Anna Maria Island sits with its chick May 29 on the shore in north Holmes Beach. The birds, designated as threatened in the state, are monitored locally by Anna Maria Island Turtle Watch and Shorebird Monitoring. The nest, spotted April 27, contained three eggs that hatched May 29. Even though laid several days apart, eggs in a plover nest hatch the same day, so the chicks can be protected and by their parents, according to AMITW executive director Suzi Fox. Islander Photo: Courtesy Brenda Twiss

Memorial Day weekend is the unofficial start for summer on Anna Maria Island.

This year, as with other holiday weekends on the island, revelers packed the beach May 27.

During the spring and summer months, visitors to island beaches must share the shoreline with nesting shorebirds and sea turtles.

Sharing the space involves cleaning up trash, filling in holes in the sand and removing beach gear, including chairs, canopies, games and inflatables at the end of the day, according to Anna Maria Island Turtle Watch and Shorebird Monitoring executive director Suzi Fox.

“People were pretty good this year with cleaning up their stuff,” Fox said May 29 of the holiday weekend. “There was trash at the usual spots, like the public beaches, but our bigger concern appears to be people on the beach at night.”

Fox said nesting was “spotty” in the first month of sea turtle nesting season, which started May 1 and continues through Oct. 31.

Female sea turtles only come ashore to nest, so any objects — including people — in their path can distract them and lead to a failed nesting attempt — a false crawl.

Flashlights and cellphone lights from people walking the beach at night also can be distracting for sea turtles.

Fox said tracks on the beach, which is how AMITW volunteers spot nests and mark them off for protection, indicate that some sea turtles are crawling ashore then angling north or south along the beach before returning to the Gulf without laying a clutch of eggs in the sand.

Fox said a turtle moving away from people on the beach could cause the diagonal tracks.

“We understand that people are excited to see the sea turtles,” Fox said. “But they need to keep back at least 50 feet and let the turtles do their job.”

In 2018, AMITW broke its record for loggerhead nests with 534 nests by the end of the season. Fox is hopeful this will be another record-breaker for island sea turtles.

“Things are moving a little slow right now, but that could all change as the weather warms up,” Fox said. “Even with a slow start, nesting could pick up any day now, and we could very well break another record.”

To report unattended property or large holes on the beach, call code enforcement:

To read about turtle-friendly lighting, visit:

To learn more about sea turtles and conservation around the world, visit Sea Turtle Conservancy: conserveturtles.org.