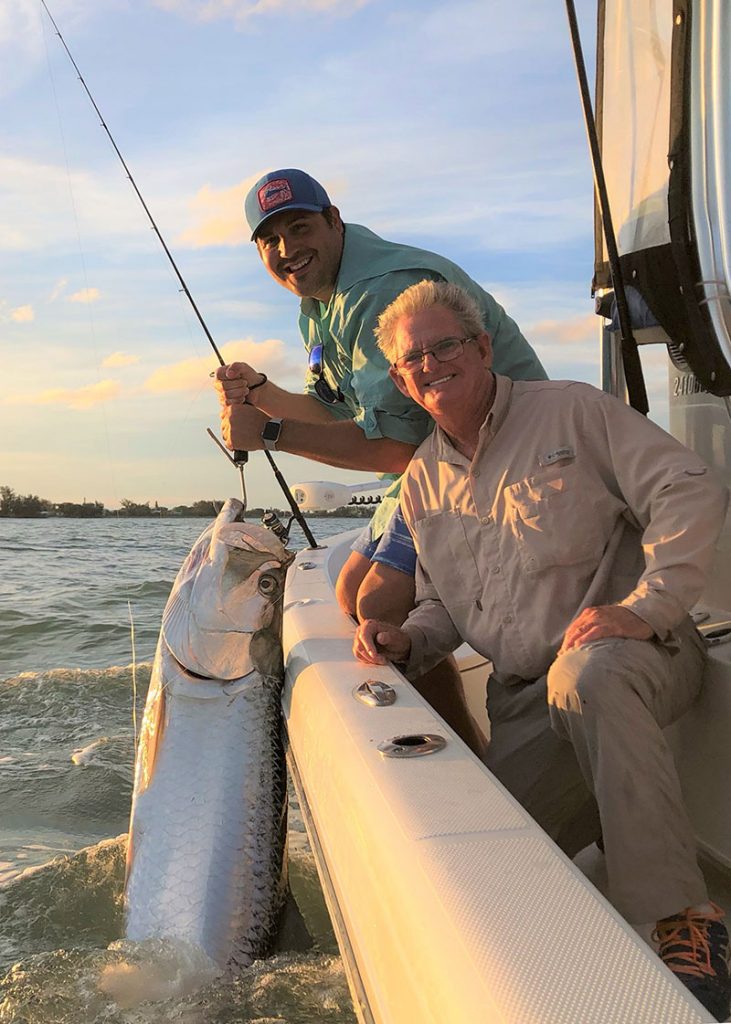 Craig Brosius, left, visiting from Richmond, Virginia, holds up his first tarpon of the day, caught June 14 on the early morning bite on a pass crab. Brosius was guided on his tarpon hunt by Capt. Warren Girle, front. 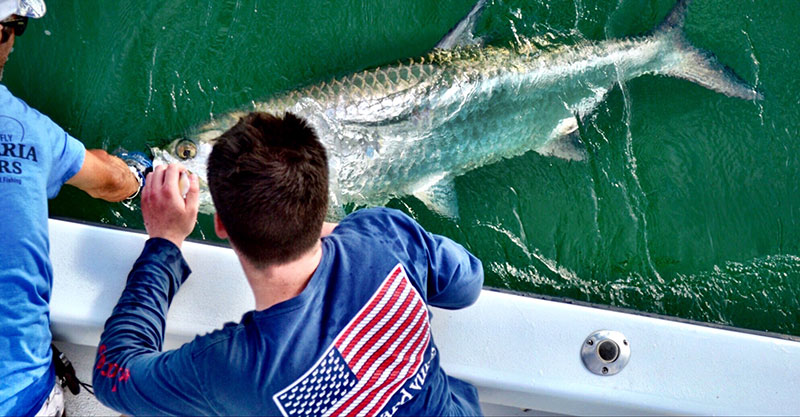 Capt. David White, left, of Anna Maria Charters, helps Soren Howard, of Denver, wrangle his catch — a “respectable” tarpon — to the boat June 17 for a trophy photo. The silver king was hooked off of Bean Point at the north end of Anna Maria on a pass crab. 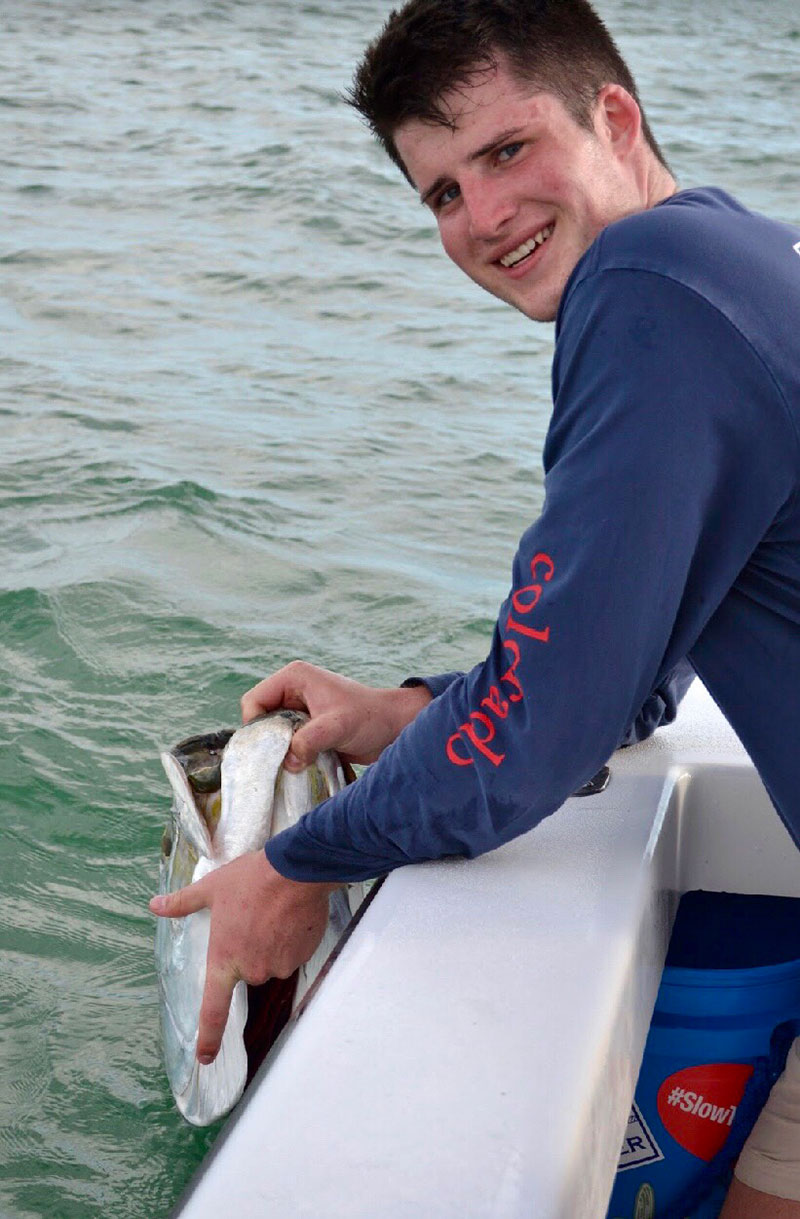 Capt. David White, left, of Anna Maria Charters, helps Soren Howard, of Denver, wrangle his catch — a “respectable” tarpon — to the boat June 17 for a trophy photo. The silver king was hooked off of Bean Point at the north end of Anna Maria on a pass crab.

If you can take the heat, there is plenty of good fishing around Anna Maria Island.

Reports from the offshore guys sound promising, especially for American red snapper. In fact, they’re saying it’s hard to keep snapper away from the bait. Other fish being caught offshore include yellowtail and mangrove snapper and red grouper, as well as African pompano.

If being out of the sight of land is not your fancy, there is plenty of action close to Anna Maria Island on the flats. Fishing mangrove edges and shallow grass flats is producing great action on catch-and-release snook, and you should encounter a few catch-and-release redfish on your hunt. Catch-and-release spotted seatrout are a good bet on deeper grass flats during strong, incoming tides. Fishing shallow-water structure in Tampa Bay is another good bet. The first signs of the mangrove snapper bite are happening, as well as Spanish mackerel and some keeper-size gag grouper.

Lastly, if you’re looking for something big, you can target tarpon along the beaches. And if you find the tarpon, there’s a good chance you’ll see some bigger fish looking for a meal — bull sharks or hammerheads — which can put up quite a fight on the hook.

On my Southernaire charters, I’m enjoying the catch-and-release action on the flats of Tampa Bay. Both the snook and spotted seatrout are responding nicely to the conservation effort. While trout fishing, I’m seeing a lot of larger fish —18-22 inches — being caught by my anglers. As for snook, hooking up on 20-30 fish in a morning trip is attainable, even this late in the year. While targeting the snook, I’m also seeing some redfish, but not enough to be impressed.

Fishing structure in Tampa Bay is proving to be good for Spanish mackerel and mangrove snapper. With the arrival of hatch bait, I anticipate the snapper bite to get better over the next few weeks.

Also, there are still a few gag grouper around structure in Tampa Bay. Free-lining live pinfish or using a knocker rig with a pinfish is resulting in keeper-size fish for the coolers.

Capt. Warren Girle is in pursuit of tarpon. The bite has led him to work the evening outgoing tides at Egmont Key. “Doing the drift” with live pass crabs as bait is resulting in numerous catches. Girle is reporting most silver kings are 80-120 pounds.

Moving to the flats, Girle is targeting catch-and-release trout and snook. Both are cooperating nicely by taking live bait offerings, such as shiners.

Mangrove snapper are being caught by Girle’s anglers while working over structure in Tampa Bay and the Gulf of Mexico.

Jim Malfese at the Rod & Reel Pier is seeing a variety of fish reeled up from the crystal-clear waters that surround the pier. First and foremost, the emergence of mangrove snapper is a welcome sight and it’s expected to get better in the weeks to come. Live shrimp offerings are a good bet for the snapper and will turn up the sheepshead, flounder and catch-and-release redfish.

Spanish mackerel and jack crevalle are being caught by anglers casting small pink or white jigs around the edges of the bait schools.

Capt. Aaron Lowman is working his charters on the lush grass flats of Tampa Bay for a variety of species. Catch-and-release snook and spotted seatrout are the predominant bite and free-lining live shiners is producing multiple catches.

Also, while in Tampa Bay, Lowman is finding action on gag grouper and flounder around rock piles and reefs.

Lastly, fishing in the Gulf in 30-45 feet of water is producing macks and a few cobia for Lowman.

Capt. Jason Stock is spending afternoons targeting tarpon, casting live pass crabs or live threadfin herring is resulting in a bite. Most catches are averaging 100 pounds, with an occasional bigger fish in the mix, according to Stock.

Gag grouper fishing in Tampa Bay also is proving to be good. Free-lining live pinfish around structure is attracting keeper-size gags to the hook.

Capt. David White of Anna Maria Charters is running as far as 50 miles offshore to put his clients on the American red snapper, red grouper bite, and mangrove and yellowtail snapper are finding their way into the cooler as well as some African pompano.

Moving inshore, White is pursuing tarpon throughout Tampa Bay with pass crabs and threadfin herring as bait, resulting in catches in the 100-pound range.