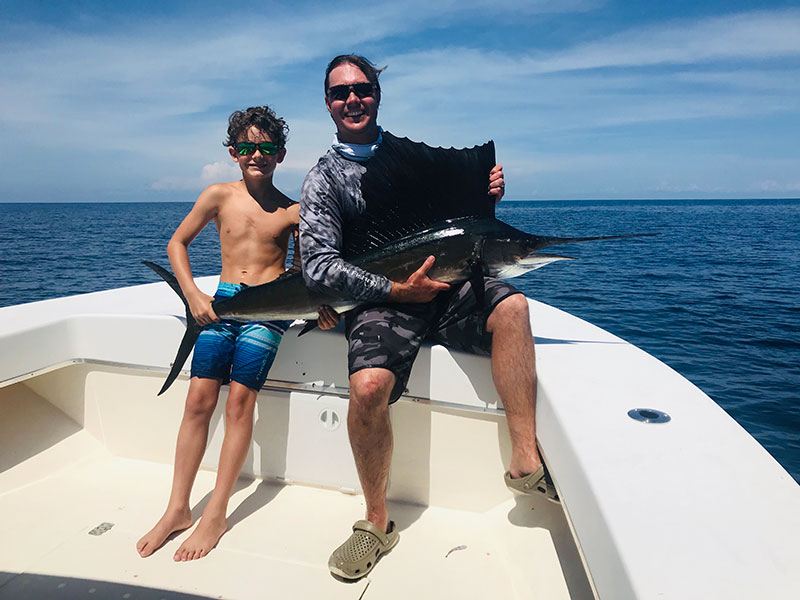 Jeremy Nance and son Carter show off the sailfish they caught June 4 on a fishing trip in the Gulf of Mexico. They fished about 20 miles offshore with father-in-law/grandfather Johnny Rigney aboard his boat. They attracted the sailfish with a lure made by Jeremy Nance, who said it “put up quite a fight.” The fish was released after the trophy photo: Islander Photo: Johnny Rigney

Tarpon are the main attraction again for Anna Maria Island.

The Gulf beaches, Passage Key inlet and around Egmont Key are producing stellar action. Live pass crabs and live threadfin herring are the go-to baits, although switching presentations may be a good idea as the bite wears on.

I have found live pinfish works when the tarpon are hanging close to the bottom, especially in the passes.

And there’s always the “anchor up and chum” method, cutting threadfin herring to churn up a chum slick. This method is effective when the tarpon are not as active as they could be. And hey, let’s face it, a hookup is a hookup with a silver king.

With the opening of American red snapper for commercially permitted charter captains, reports are pouring in. Limits of these tasty snappers are being caught daily. And, with gag grouper also in season, you have the opportunity to catch two of the best-tasting fish in our waters.

Also offshore are yellowtail and mangrove snapper, as well as permit.

On my Southernaire charters, I’m following the catch-and-release snook bite around Tampa Bay and the surrounding waters. Swift moving tides shortly after sunrise are producing a great bite from the popular backcountry fish. Free-lining live shiners around mangroves edges, where deep water exists, is where I’m seeing the best action. Most snook landings are 22-26 inches, although I’ve had a few fish exceed 30 inches.

Spotted seatrout are being caught and released by my clients with regularity. Deeper grass flats where clean swift currents are flowing produce the best action. Again, free-lined shiners are the bait of choice.

After spending a couple of hours on the flats, I’m switching tactics and moving into deeper water. Fishing rock piles and wrecks in Tampa Bay is good for catching Spanish mackerel and mangrove snapper. For the macks, a live shiner combined with a longshank hook is a good bet. As for the snapper, a 1/2-ounce knocker rigs work well.

Capt. Warren Girle is spending his days tarpon fishing along the Gulf beaches of Anna Maria Island, Longboat and Egmont keys. Finding schools of fish that have not received a lot of pressure is key to getting a bite. Early morning tarpon trips are producing numerous hookups for Girle’s clients. For bait, he uses either live crabs or live threadfin herring. Average size of the tarpon catches: 80-120 pounds.

After the search for the silver kings, Girle is venturing offshore to reefs and ledges for mangrove snapper. On good days, limits of these fish are going in the cooler.

Capt. Aaron Lowman is putting clients on take-home gag grouper in Tampa Bay. Live bait and trolling artificials are producing action on these hard-fighting, tasty fish for Lowman’s anglers. Fishing bridges, rock piles and reefs are good places to hunt the highly sought fish. Mangrove snapper are showing in the same areas as the gags. Lowman’s key to success with snapper is a light fluorocarbon leader, a small hook and lots of chum. While chumming, he is attracting Spanish mackerel to his clients’ hooks.

Lastly, Lowman is targeting tarpon along the beaches and in the passes, where live crabs and threadfin herring attract the bite.

Capt. Jason Stock is enjoying some time inshore, on the hunt for tarpon. Casting live bait, especially during early morning hours is producing fish in the 100-pound range, and bigger silver kings are in the mix for Stock’s sport fishers. Also, while inshore, Stock is putting anglers on keeper-size shallow-water gag grouper.

Moving offshore, American red snapper are bending rods and hitting the limits. Next up, Stock is moving onto yellowtail snapper and mangrove snapper.

Capt. David White is spending a lot of time pursuing tarpon. White, a seasoned guide, is honest enough to admit that he’s had some great tarpon days and some not so great days.

On the good days, when the fish are chewing, White is achieving numerous hookups with many fish exceeding 100 pounds. Pass crabs are his bait of choice.

Moving offshore, White is putting clients on plenty of American red snapper, as well as gag grouper on live and frozen bait.

Jim Malfese at the Rod & Reel Pier is enthusiastic about how clear and clean the water is at the pier. And when I was there recently, it was like looking into an aquarium.

Large schools of small shiners are gathering in the pristine waters and are sure to attract a local favorite — mangrove snapper.

You can count on seeing Spanish mackerel and jack crevalle as the bait schools become more abundant in Tampa Bay.

Peering into the depths over the side of the pier, you’ll also see some big snook, although catching them is not easy. After all, if you can see them, they can see you. Try medium-sized bait, such as lizard fish, mojarras or pinfish to entice the snook. But don’t bother to target the large linesiders unless you have stout gear and strong arms.

Lastly, with live shrimp as bait, some sheepshead, flounder and a few big over-slot catch-and-release redfish are on the hook at the R&R.