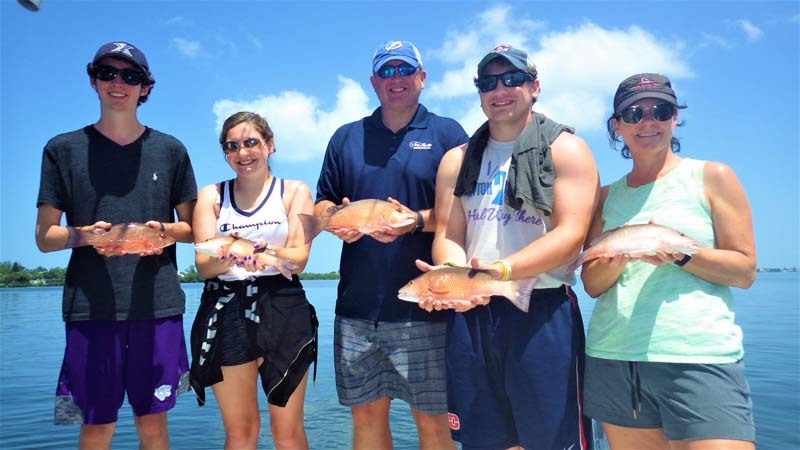 With water temps climbing to the mid to upper 80s, fishing around Anna Maria Island may require you to change your tactics and your location.

Targeting catch-and-release snook on the shallow flats of Tampa Bay may not be as good as it could be, but that doesn’t mean you can’t catch fish. Try looking in deeper — cooler —water along channel edges or around deep-water docks.

Like people, snook want to take refuge from the heat and lingering in the warm, shallow waters is not the place to find refuge.

Another alternative is to target fish at night. This might mess up your sleep schedule, but how badly do you want to catch a snook?

Another option is to pass up the snook and target spotted seatrout. Try fishing grass flats in depths of 6-20 feet of water and I’ll bet you’ll find some action.

Also, fish structure for mangrove snapper and Spanish mackerel. The snapper are making a good showing in Tampa Bay, and the heat doesn’t seem to bother them. The same applies for the macks. Find large bait schools, especially glass minnows in Tampa Bay, to stir up the macks.

And, if you can run offshore to deeper water in the Gulf of Mexico, you’ve got great prospects.

Reports of American red snapper are positive despite the heat. In water depths of 100 feet, the reds are perfectly comfortable, shielded from the extreme water temps that shallow-water species avoid. Also while offshore, anglers are catching numerous yellowtail and mangrove snapper, as well as red grouper.

Adapt to the surroundings, change your approach and find success on the water.

On my Southernaire charters, I’m putting sport fishers on catch-and-release spotted seatrout on deep grass flats during the stronger stages of the incoming tides. The size range of the trout is 14-18 inches, which isn’t huge, but when they catch 30-40 in a morning, there are no complaints from my anglers. And, since trout are catch-and-release, size doesn’t matter.

For variety, I’m seeing a fair amount of ladyfish and Spanish mackerel mixed in with the trout bite. Free-lining live shiners works well for the trout and, if you’re using small “hatch bait,” adding a popping cork to your rig will put some distance on your cast.

Fishing structure in Tampa Bay is providing action on mangrove snapper and flounder. Both are taking live shiners combined with a knocker rig. This method also is resulting in some juvenile gag grouper of 10-20 inches. And, let me tell you, a 20-inch gag on light tackle is no joke. Strong arms and luck are essential to reeling one of these bruisers out of the structure.

Jim Malfese at the Rod & Reel Pier is seeing a mixed bag — mangrove snapper, flounder and a few catch-and-release redfish — being caught by anglers using live and frozen shrimp. On days when the bait schools surround the pier, casting silver spoons or small jigs for Spanish mackerel is worthwhile. Jack crevalle and ladyfish are taking spoons and jigs, too.

Anglers looking to hook into bigger game are targeting catch-and-release snook. Free-lining large baits, such as ladyfish, pinfish or mojarras, is a sure way to entice a 35-plus inch linesider to the hook.

Capt. Aaron Lowman is working the nearshore reefs with his clients, looking for permit. Casting live pass crabs or Doc’s Goofy jigs to schooling fish is resulting in some drag-screaming action. Most fish being caught are 10 pounds.

Also present are macks and mangrove snapper. Free-lined live shiners cast over the reef are attracting this bite.

Moving inshore, Lowman is finding spotted seatrout on the deeper grass flats of Terra Ceia Bay. Mixed in are macks, ladyfish and some jacks. On the shallower flats, he’s putting sport anglers on catch-and-release snook during strong-moving tides, especially early mornings before the sun heats up the flats.

Capt. Warren Girle is fishing inshore throughout the lush grass flats of Tampa Bay. Free-lining live shiners around mangrove structure is yielding both catch-and-release snook and redfish. The bite is primarily from the snook, with a few redfish mixed in.

Moving slightly deeper, Girle is putting anglers on catch-and-release spotted seatrout on flats with depths of 5-8 feet. Again, free-lining shiners is working nicely, with the addition of a popping cork.

Mixed in with the trout are macks and ladyfish. While fishing structure in Tampa Bay, Girle is finding keeper mangrove snapper and more macks.

Moving offshore, Girle is hooking clients up with some gag and red grouper, as well as some hefty mangrove snapper.

Capt. David White of Anna Maria Charters is working inshore due to frequent offshore storms and rough seas. Targeting catch-and-release snook and redfish around mangrove shorelines is producing the best action for White and his clients. Live, free-lined shiners are working as baits. Fishing docks with live shrimp also is putting a bend in the rods.

White says black drum and mangrove snapper under the docks are falling for the bait, especially when it’s a live shrimp. Fishing the artificial reefs in Tampa Bay, as well as other structure, is yielding some mangrove snapper and Spanish mackerel for the coolers.

Lastly, White is in pursuit of juvenile tarpon in the back country. Finding the elusive fish can be challenging, but hooking one on light tackle is a reward not forgotten. The trophy photo is priceless, as the credit card TV commercials say.

Capt. Jason Stock is putting clients on an awesome offshore yellowtail snapper bite. Chumming and free-lining baits to the “flags,” as they’re called when they are large enough, is providing the action and some excellent tablefare for Stock’s clients.

Also while offshore, Stock is leading his clients to limits of American red snapper and red grouper.

Moving closer to shore, Stock is working in Tampa Bay, putting his share of catching keeper-size gag grouper in the coolers.

Also while bay fishing, Stock is hooking up with tarpon for trophy photos and plenty of sharks for action.