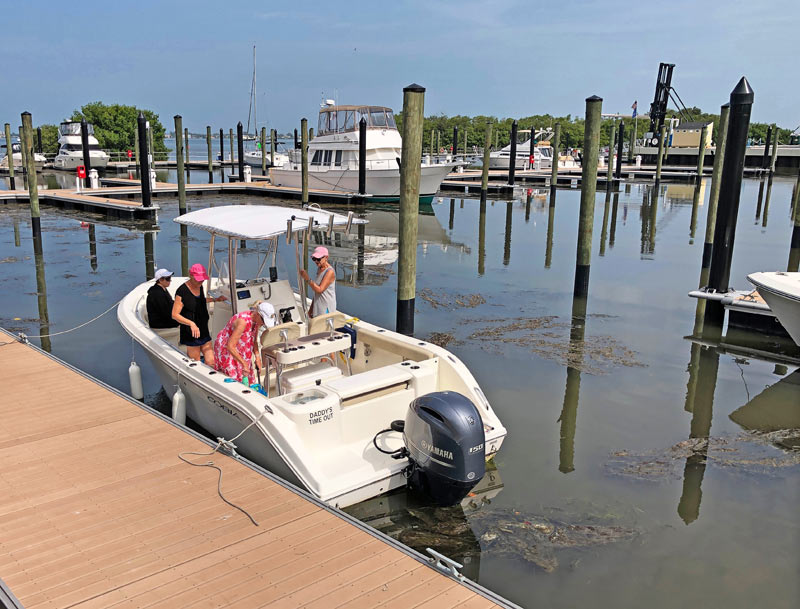 Boaters on Daddy’s Time Out head out June 27 from One Particular Harbour Marina on Perico Island, where brown gumbo algae is visible in the water. The algae also produced a foul odor at the marina. Islander Photo: Lisa Neff The algae Lyngbya wollei — known as brown “gumbo” — forms a carpet on the surface of the water in Robinson Preserve June 27. Islander Photo: Courtesy Manatee County 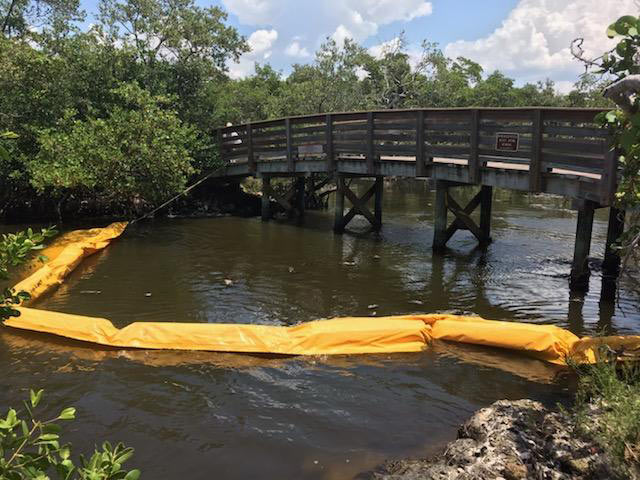 The mats of Lyngbya wollei, also known as brown “gumbo” algae, were so thick in the waters in Robinson Preserve June 27 that wading birds stood on them.

Mats as thick as 12 inches and as large as two-tenths of an acre clogged the waterways at the preserve, preventing kayakers from passing through and “stopping a jon boat cold,” Elswick wrote in the email.

Lyngbya “gumbo” algae is a type of cyanobacteria or blue-green algae common in the spring-summer months around Anna Maria Island. It forms thick mats that resemble clumps of grass and sewage at the water surface, mostly in backwaters and bays.

Land management rangers and supervisors from the county natural resources department moved the brown algae, dragging large clumps to the mouth of the Manatee River and into its current.

“They corralled the algae, moved it into the tidal channel and constructed a floating turbidity barrier to keep it from coming back in,” Hunsicker told The Islander June 27.

Elswick wrote in his email to Hunsicker that people were still enjoying the preserve, despite the odor associated with brown algae, which lingered in the mangrove roots.

He also stated a caution: “I would speculate the decomposition of large volumes of algae outside Robinson waterways may act to lower dissolved oxygen further. We’re bracing for a fish kill and will act quickly to remove those as necessary.”

Some dead fish were reported June 22-24, when blue-green algae appeared in the Manatee and Braden rivers.

Ryan McClash was standing on his dock June 23 in the Riverdale subdivision of Bradenton, talking with Suncoast Waterkeeper’s Andy Mele of Bradenton.

Blue-green algae appeared in his canal in the 4200 block of Second Avenue Northeast a week earlier. By June 23, the water was bright green.

McClash told Mele the river looked like it was dyed green.

Meanwhile, the Florida Department of Environmental Protection was taking water samples from the Manatee River to determine the types of algae present, as well as toxicities.

Tests June 18 and June 20 confirmed the presence of a cyanobacteria, Aphanizomenon flos-aquae, in the river, including the canal in McClash’s neighborhood. But no toxins were detected. The same algae were found at all but one of the tested river locations.

A sample taken June 19 near Ellenton was dominated by Cuspidothrix.sp, a freshwater algae that can produce toxins — but none were found in the DEP sampling.

The latest DEP samples were pulled June 27, as reports persisted and another algae, the brown“gumbo,” was clogging up the waters near the mouth of the river, as well as in the backwater, bays and sounds.

Boaters using the marina at One Particular Harbour June 26 found heavy mats of “gumbo” algae, but it had diminished the following day.

Dee Ann Miller, of the DEP press office, said the agency would continue to respond to alerts about algae and that persistent blooms would be monitored and retested.

“I’ve been here my whole life. I’ve never seen this,” Capt. Scott Moore said of the bright-green hue in the Manatee River, where he often leads charter fishing trips.

“It’s up the river from the Green Bridge on. Down at the mouth, no,” he said.

Moore blamed the blooms on fertilizer and nutrient runoff, as well as over-development and under-management of water issues.

“We’ve got to pass some laws. All this new development, all these septic tanks, all this fertilizing. We have to get control of this,” he said.

Cynthia Heil, director of the new Red Tide Institute at Mote Marine Laboratory, told The Islander June 27 that alga, especially freshwater types, “like the heat, love the sun and like the nutrients.”

With less rain than usual and higher than normal summer temps, conditions are ripe for blooms.

“They like a lot of sunlight and runoff. Lyngbya likes iron. Some are toxic, others not,” she said.

Meanwhile, Hunsicker is holding his breath.

“What we are seeing is a magnificent joining of sunlight, temperatures and nutrients, and some of the hottest days on record conspiring together to make a big algae bloom,” he said.

“The Saharan dust we are getting in our atmosphere has iron. All the dead fish from last year’s event went to the bottom and are still decaying. They didn’t just disappear. Mother Nature is responding,” he added.

• Aphanizomenon flos-aquae is a species of cyanobacteria found in brackish and fresh waters around the world. It is known to produce endotoxins, the toxic chemicals released as cells die. However, not all forms of this algae are toxic.
• Cuspidothrix.sp is a species of cyanobacteria similar to A. flos-aquae. It grows in fresh and brackish waters, but is not as common or widespread and more prone to hot climates.
• Lyngba wollei is a filamentous cyanobacterium that forms thick mats on the water’s surface. It is common throughout North America, but large blooms can degrade water quality, cause skin irritation and impair natural habitats.
• Karenia brevis is the scientific name for red tide. In high concentrations, it emits toxins that can cause respiratory issues in humans and marine mammals, and can kill fish, shellfish, birds and mammals.