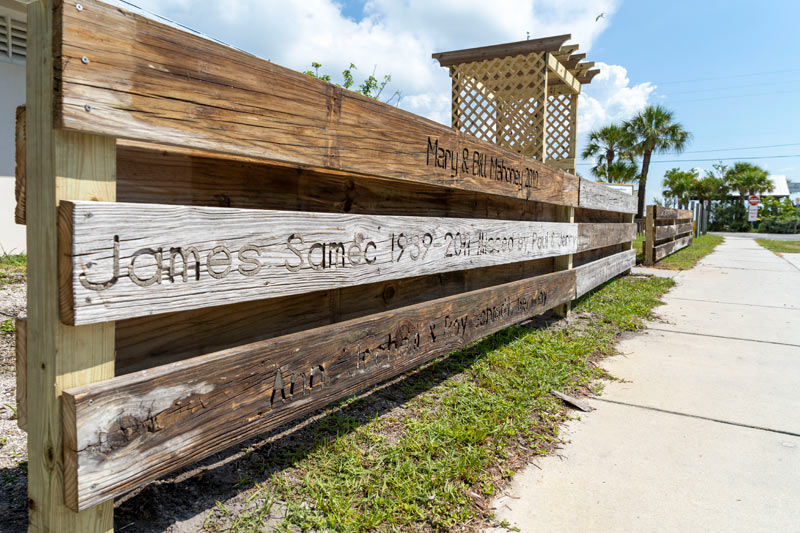 On Pine Avenue at City Pier Park, at the corner of Pine Avenue and North Bay Boulevard, stands a prototype fence made from the old, inscribed pier planks. Islander Photos: Cory Cole 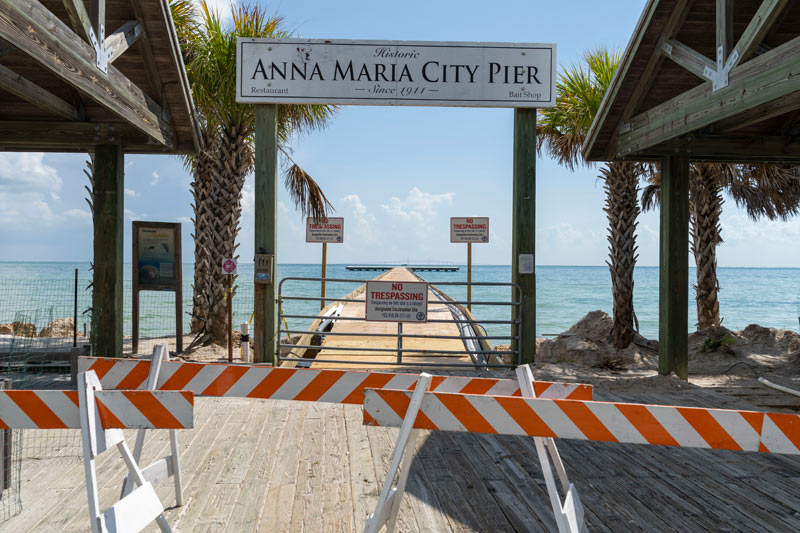 The Anna Maria City Pier is free of workers July 3, one day away from July 4 and the long holiday weekend.

Anna Maria Mayor Dan Murphy said work on the pier is ahead of schedule and he did not think the holiday observance would cause a delay.

At this time, i+iconSOUTHEAST is working on another project, though Murphy said he expected the contractor back just after July 15 to continue work on the decking.

Also, Miller Electric is expected to wire the electrical lines in the coming weeks.

Meanwhile, Frank Agnelli, of Mason Martin LLC, has been working with i+icon to transport construction materials for the restaurant and bait shop at the pier’s T-end.

Murphy said a contract with Agnelli is being finalized.

“It’s a matter of crossing the t’s and dotting the i’s,” Murphy said July 3 in an interview with The Islander.

In a related project, public works employees built a prototype fence at City Pier Park, at the corner of Pine Avenue and North Bay Boulevard, in response to people wanting to see something done with the engraved planks from the old pier structure destroyed by Hurricane Irma in 2017.

Murphy said a proposal would be presented July 11 to the city commission. At that time, the commission may consider going forward with the fence or making changes.

City pier funding at a glance

The city has taken in about $4.1 million for the pier project. The Manatee County Tourist Development Council budgeted $1.5 million. About $11,000 was raised on

GoFundMe by the Anna Maria Island Preservation Trust. The city allocated $304,000 in its fiscal 2018-19 budget. Manatee County committed $333,000. The city also received $750,000 in state historical grants and another $945,000 from the Federal Emergency Management Agency. Most recently, the city received approval for an additional $285,000 from the state.

The TDC recommended an added $435,000 for the pier, but the county commission has not yet approved the money. The added funds are expected to go before the board in early August.

Also, Murphy said July 3 that additional funding is expected to come from the current pier leaseholder.

However, there is no dollar amount, as details of a future restaurant-bait shop lease and the leaseholders contribution to the build-out are being worked out.

With all the expected money awarded, the funding will total $4.97 million.

Construction of the restaurant and bait shop will be funded from the current and the 2019-20 fiscal budgets, provided Mason Martin starts work before Oct. 1, Murphy said.

Mason Martin bid $1,041,101 to build the restaurant and bait shop at on the T-end of the pier. This expense will bring the total cost of construction to about $5.9 million.