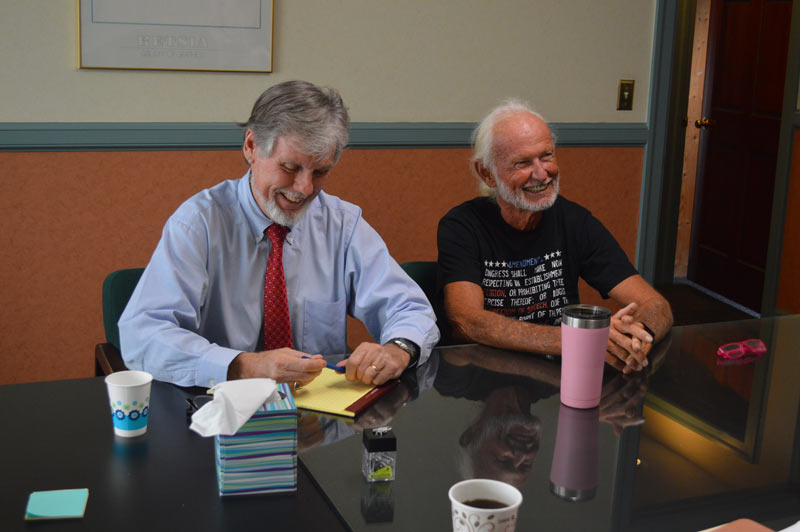 The discovery has ended.

John Metz, former Bradenton Beach Planning and Zoning Board member, was deposed July 2 in a lawsuit filed in August 2017 by ex-Mayor Jack Clarke and joined by the city against six former city board members alleging violations of Florida’s Government-in-the-Sunshine Law.

Metz, the only defendant with an attorney, was the last of nearly 20 depositions taken since the suit’s inception.

When the lawsuit was initiated, city attorney Ricinda Perry claimed recordings of CNOBB meetings indicated the defendants discussed matters that could come before them as board members.

Discussions allegedly were held July 25, 2017, at a CNOBB steering committee meeting, about a citizen-initiated referendum to prohibit parking garages in the city charter.

The city claims parking garages were a reasonably foreseeable topic of discussion for the P&Z board and, at a June 20 pretrial hearing, the court ruled in favor of the plaintiffs’ summary judgment on the matter.

However, Metz claimed July 2 that the Sunshine Law is a violation of his First Amendment right to free speech.

The Sunshine Law states that members of the same government agency cannot discuss matters that might come before them outside of public meetings. This includes emails, text messages and phone calls.

When asked by the city’s attorney, Robert Watrous, if he believes the Sunshine Law is unconstitutional, Metz responded, “Yes.”

“To me, it’s based on the situation I’m in, given that the allegations that I understand in this lawsuit charge me with a civil penalty for petitioning the government, which is one of my fundamental rights to do, through the initiative process we were using.”

Metz was referring to the defendants’ claim that mention of the parking garage only was made about a possible charter amendment to prohibit parking garages by CNOBB, but removed from the organization’s list of proposed amendments.

CNOBB used the state referendum process to put three initiatives on the ballot in 2017 — and the electorate approved the charter amendments.

Metz said July 2 that the statute does not require review of petitions by the P&Z board. Therefore, he says, the CNOBB/P&Z members did not violate the law at their July 25 meeting.

“I think it’s extremely vague. It gives you no guidance into what you are supposed to do,” Metz said July 2 of the Sunshine Law. “I think we find ourselves in this quagmire because of that. There is no clear guidance where reasonable people can try to figure out what they can and can’t do. And I believe that it certainly chills free speech and a right to assemble and petition.”

Watrous asked Metz if he is aware that certain constitutional rights can be waived by voluntary agreement, including the oath Metz signed upon joining the P&Z board in 2014, which stipulates he would “support, protect and defend the Constitution and government of the United States and the state of Florida.”

Metz responded, “I swore to defend the Constitution of the United States and I think that’s part of this case.”

Watrous then asked, “And the state of Florida, too, correct?” to which Metz responded, “Yes.”

A trial is planned for the week of July 15.