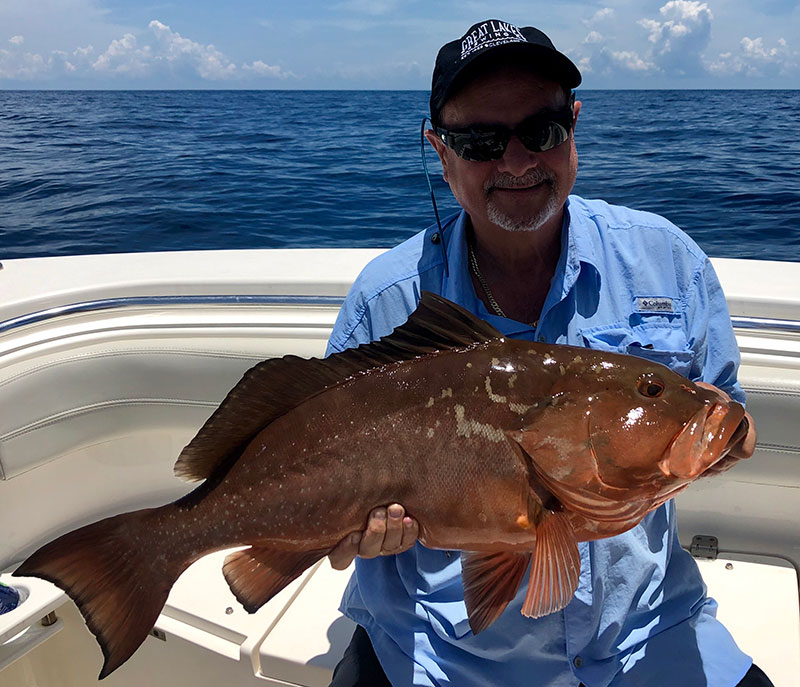 Ralph Paul, of Fort Worth, Texas, with a nice red grouper. He caught the fish July 20 in 120 feet of water on a pinfish with Capt. David White.

If you like fishing in the rain, you probably love this weather.

Frequent morning thunderstorms moving in from the Gulf of Mexico have made conditions slightly less favorable for fair-weather anglers. Those who didn’t mind the rain were rewarded with excellent inshore action on catch-and-release spotted seatrout.

Deep grass areas in Tampa Bay are host to some of the best trout fishing around. While most catches are on the smaller side — 14-16 inches — the number of trout outweigh the size. Hooking up 30-40 fighters on a morning fishing trip amounts to top action for most anglers.

The only thing better is the conservation of the species, as well as redfish and snook, all catch-and-release until the Florida Fish and Wildlife Conservation Commission determines they have recovered from impacts to red tide in 2018 and early 2019.

Using shiners or “hatch bait” is yielding the best bite. You may want to add a popping cork or Cajun Thunder cork to your rig to aid in casting, as the baits are small. Don’t be discouraged about the size of shiners though, as the trout don’t mind. In fact, I think they prefer the small bait.

Moving offshore, snapper fishing around the ledges and reefs is producing some good action. Chumming in depths of 50-60 feet is attracting mangrove and yellowtail snapper. Try free-lining small shiners to the fish if they are visible behind the boat. If you can’t see the fish, use a jig head to get the bait down toward the bottom.

Moving out to depths of 100 feet or more is providing good action — especially on American red snapper and red grouper. Both are being caught on rigs baited with frozen or live bait offerings.

On my Southernaire charters, I’m putting sport anglers on their share of seatrout. Casting small shiners over deep grass areas in Tampa Bay is attracting 30-40 trout per morning to our bait. Mixed in with the trout are ladyfish, Spanish mackerel and jack crevalle, adding variety to the outing.

Next, I’m targeting mangrove snapper in the bay on some of the local wrecks and reefs. Most snapper catches are 12-15 inches, with a few 18-inchers mixed in. Spanish mackerel are present and are 15-25 inches.

Capt. Aaron Lowman is working inshore for a variety of species. Fishing deep grass flats in Terra Ceia Bay is resulting in good action on catch-and-release spotted seatrout. Live shiners combined with a popping cork are being devoured by aggressive trout. Most are 12-16 inches, although fish exceeding 20 inches are in the mix.

While targeting the trout, Lowman’s anglers are seeing Spanish mackerel, ladyfish and a few mangrove snapper reeled up. And snapper is hopping in the coolers.

Fishing structure in Tampa Bay also is yielding catches of mangrove snapper, macks and the introduction of a few gag grouper.

Lastly, permit are being caught on artificial reefs in the Gulf.

Capt. David White of Anna Maria Charters is spending his days running offshore to work his magic in water depths of 50-100 feet. Anchoring over ledges and chumming with a small dead shiner is resulting in great snapper action. Both mangrove and yellowtail snapper are biting on jigheads baited with shiners. Limits of snappers are being hooked and some are quite large — including a 27-inch mangrove snapper caught this week by one of White’s clients. Red grouper and American red snapper also are being caught, especially in depths around 100 feet. Frozen sardines and live pinfish as bait are luring these fish to the hook.

Lastly, while fishing deep for grouper, White is encountering African pompano — a good find for the cooler.

Jim Malfese at the Rod & Reel Pier is seeing mangrove snapper being caught with frequency. Fishers using live and frozen shrimp are finding success by casting baits under the pier. While targeting the snapper, anglers are hooking into a few flounder and catch-and-release redfish.

Casting jigs or silver spoons away from the pier is resulting in migratory fish, including ladyfish, jack crevalle and a few macks.

Lastly, large baits, such as pinfish or mojarras, cast under the pier are attracting 30-40 inch catch-and-release snook to the hook.

Capt. Warren Girle is finding action on mangrove snapper while fishing offshore and nearshore structure. Ledges, wrecks and artificial reefs are host to these summer-time fish-fry favorites. Spanish mackerel and red and gag grouper can be found in these same areas. For bait, Girle is using free-lined live shiners or shiners combined with a knocker rig.

Moving inshore, Girle is putting clients on catch-and-release trout throughout the deeper grass areas of Tampa Bay. Again, live shiners are the bait of choice. While catching trout, Girle’s clients also are encountering some action from ladyfish and macks.