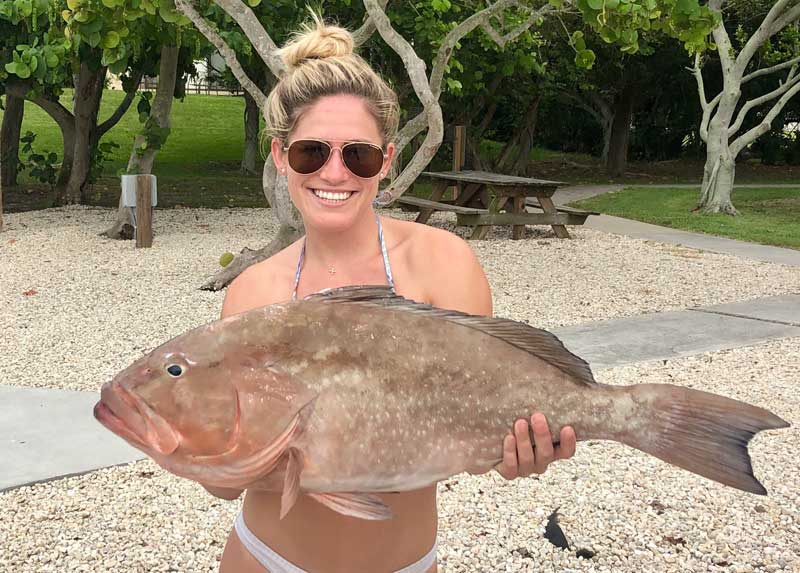 Katryna Cruz, of Miami, shows off her red grouper July 5 at the Holmes Beach dock on 63rd Street. She caught the fish in the Gulf in 140 feet of water on a live pinfish while on a charter with Capt. David White of Anna Maria Charters. 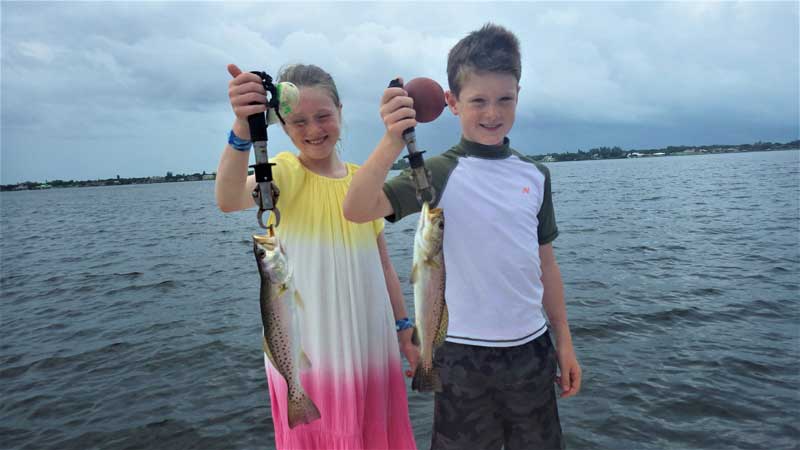 On vacation from Edinburgh, Scotland, Lauren Hogg, left, 10, and brother Callum, 9, took their first fishing trip July 12 with Capt. Warren Girle, and exceeded the success of their parents. They fished inshore with live shiners for bait and released their catch of spotted seatrout after a trophy photo.

Anglers around Anna Maria Island are finding some decent inshore action as long as they don’t mind getting wet.

Brief but frequent rain showers are sweeping through the coastal areas and, at times, the rain can be heavy. As long as lightning isn’t present, many anglers choose to cover up and brave the rain in search of a bite.

Fishing shallow flats along the mangrove shorelines of Tampa Bay is yielding decent action on catch-and-release snook. Many of these fish are in mid-migration toward the beaches, with the intent of spawning, although there are plenty of fish available on the flats if you know where to look. Casting free-lined shiners in these areas is attracting a bite. Catch-and-release spotted seatrout are being caught on the flats, too, and while targeting the trout, you may encounter Spanish mackerel and ladyfish.

Deeper water in Tampa Bay is host to mangrove snapper on fishing wrecks, reefs and bridges, which are providing near limits — a maximum five per person and 10 inches. Most snapper are 10-12 inches, although bigger fish are in the mix.

Moving offshore, anglers are enjoying action on American red snapper, as well as gag and red grouper. An assortment of baits, ranging from frozen sardines and squid to live pinfish or shiners, can get the job done.

On my Southernaire charters, I’m finding catch-and-release snook and trout on the flats provide good action for my clients. Free-lining smaller shiners — hatch bait — under a popping cork is working to attract both species, especially the trout. Moving out to deeper areas —wrecks and reefs — is resulting in some mangrove snapper and Spanish mackerel for the coolers. Both seem to be attracted to the hatch bait as opposed to the larger shiners. For the snappers and macks, I’m chumming with live and dead baits to improve the bite.

Jim Malfese, longtime baitmaster at the Rod & Reel Pier, is seeing an increasing amount of migratory fish being reeled up from the Tampa Bay waters. With the arrival of the large schools of hatch bait, predators — mackerel, jack crevalle and ladyfish — are beginning to frequent the pier in search of an easy meal. Casting silver spoons, small jigs or Gotcha plugs is a great way to get these fish on the hook. Fishing with live shrimp also is producing action at the pier, especially on keeper mangrove snapper.

Fishing structure — reefs and wrecks — is producing the bite, and mangrove snapper also are being found in these areas.

Moving to the flats with depths of 2-4 feet, Girle is targeting snook. Although catch-and-release, these fish provide great rod-bending action. Catch-and-release spotted seatrout also are coming to the hook on the flats, especially during swift-moving tides. Moving offshore, Girle is putting mangrove snapper in the 16-inch range in the cooler, as well as a few grouper.

While inshore, White is finding numerous blacktip sharks willing to take a bait. Fresh-cut chunks or Spanish mackerel are working nicely as bait.

Moving offshore, White is putting anglers on their share of red grouper and American red snapper. Fishing at depths of 100-150 feet is yielding the best results. For bait, frozen sardines, squid and live pinfish are producing.

Capt. Jason Stock continues to find a stellar offshore American red snapper bite for his clients. Live and frozen baits are producing this bite. Along with the snapper, anglers are reeling up red and gag grouper. Fishing for yellowtail and mangrove snapper is producing good action, especially on light tackle. Free-lining baits into a chum slick where the fish are feeding is yielding keeper-sizes of both fish.

Lastly, Stock continues to pursue the tarpon bite along the beaches and passes of Egmont Key and Anna Maria Island for trophy photos.