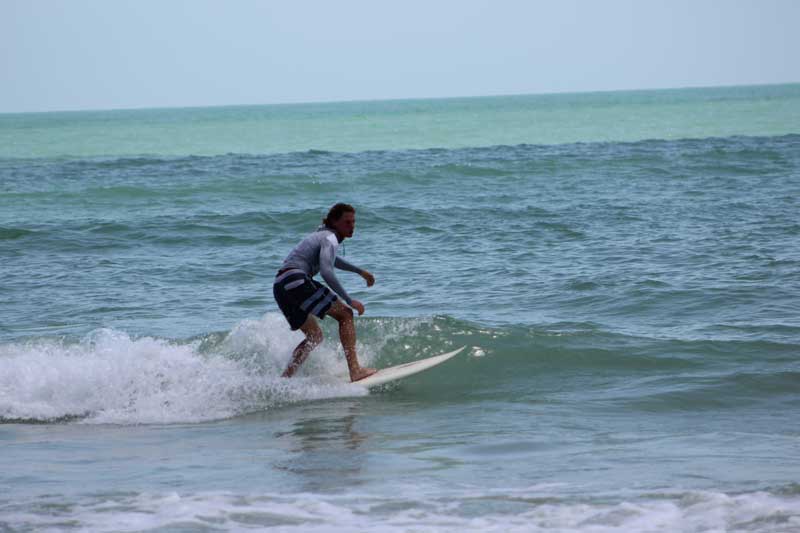 A lone surfer takes advantage of the last swells in the Gulf of Mexico from Hurricane Barry July 14 at the White Avenue beach. Islander Photo: Kevin P. Cassidy

Indoor soccer action is ongoing in the gym at the Center of Anna Maria Island, with competition in two age divisions.

Standings in the intermediate age group have Ugly Grouper and Moss Builders in a virtual tie for first. Ugly Grouper is 3-0, while Moss Builders has played one less game and stands at 2-0. Island Vacation Properties follows with a 1-2 record, while Solid Rock Construction and Cloud Pest Control are both 0-2.

The standings in the advanced age group have G&G Yardscaping leading the three-team division with a 3-1 record. Ugly Grouper and AMI Locals follow with matching 1-2-1 records leaving them in a tie for second.

G&G Yardscaping opened July 9 with a 5-1 victory over Ugly Grouper. Ryan Joseph led the way with three goals and an assist, while Connor Samblis added two goals and two assists. Peyton Harlan completed the offensive effort with an assist in the victory.

Angelina Albrecht notched the lone goal for Ugly Grouper in the loss.

G&G escaped with a 5-3 victory over AMI Locals in their second match of the night. Joseph scored five goals to lead the victors, which also received two assists from Peyton Harlan and an assist from Ava Harlan.

Indoor soccer continues every Tuesday evening with the action kicking off at 5 p.m.

Horseshoe action at the Anna Maria City Hall horseshoe pits was short and sweet the week of July 8, as neither session needed a knockout round to determine a winner.

Tim Sofran walked his way to the winner’s circle with the only 3-0 record during July 13 action.

Play gets underway at 9 a.m. Wednesdays and Saturdays at the Anna Maria City Hall pits. Warmups begin at 8:45 a.m. followed by team selection.

Golf was rained out last week at the Key Royale Club in Holmes Beach.