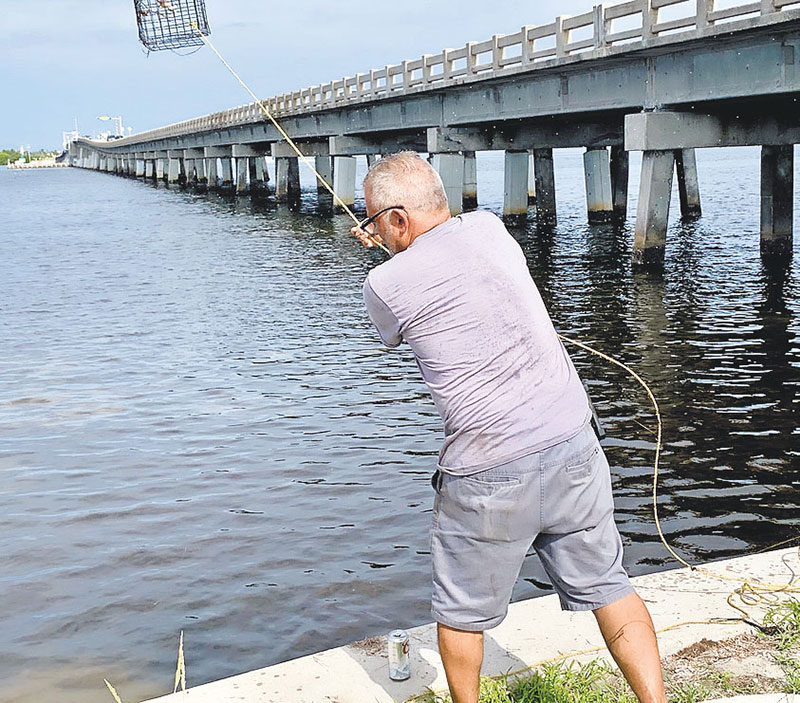 Bradenton resident Tony Rivera tosses his crab trap Aug. 14 near the western side of the Anna Maria Island Bridge. Rivera, who was born in Puerto Rico and also lived in Boston, says crabbing by the bridge is a favorite pastime. Islander Photo: Sarah Brice

Tony Rivera moved to Bradenton just a year ago, but he’s already been crabbing at the Anna Maria Island Bridge at least 15 times.

He likes to go there with his 3-year-old grandson, Andrew Carmona, where they form memorable bonds while taking in the fresh air and the boundless view. In between tosses of his crab trap near the Kingfish Boat Ramp at the western end of the bridge, Rivera will tell you he’s uncertain about plans by the Florida Department of Transportation to replace the 62-year-old drawbridge with a high fixed span.

“Sincerely, I hadn’t heard about it,” he said Aug. 14. “But I think it would make it a bit more difficult to toss the crab traps.”

He needn’t worry yet — or for many years. By the time the new bridge is scheduled to open, young Andrew will be a teenager.

Although the DOT has said the bridge must be replaced, having determined it is “functionally obsolete and structurally deficient,” construction on a new span is not scheduled to begin until fiscal 2029. By the agency’s own accounting, construction could take two to three years or longer to complete.

The bridge, built in 1957, has undergone six structural repairs since 1978 and has exceeded its life span of 50 years, said DOT spokesman Brian R. Rick. Major repairs were undertaken in 2009, and the most recent fixes occurred in 2013.

But a $6.2 million design plan on the 65-foot-clearance fixed-span bridge replacement will not be completed until fiscal year 2022-23, Rick said Aug. 15 in an email to The Islander.

Right-of-way acquisition, the next step, should not take long or cost much because there are no significant structures that must be bought. Nonetheless, right of way has not yet been funded.

In addition to the Anna Maria Island Bridge, the DOT also wants to replace the Cortez bascule bridge with a 65-foot-clearance fixed-span. That effort has drawn strong opposition from people who believe a large bridge would destroy the character of the historic fishing village.

The DOT maintains that building new bridges is more economically sound than continued repairs, which would increase in scope but prove less effective because of continued deterioration.

The agency has pegged the cost of the Anna Maria Island Bridge at $76 million and the Cortez Bridge at $72 million. Both cost estimates account for inflation and rising costs, Rick said.

The U.S. Department of Transportation Federal Highway Administration estimated in a report three years ago that construction for the Anna Maria Island Bridge would cost $87 million.

It’s been a long, choppy effort to get both bridges replaced.

The Manatee Avenue/State Road 64 span, linking Holmes Beach and Perico Island, is further along because design work, which began in late 2015, is about 60 percent complete, Rick said.

About $6.4 million for design of the new bridge linking Cortez and Bradenton Beach has been allocated and an engineering firm has been chosen, but that work has not started because a project development and environment study has yet to be made public.

That study, started in 2013, is expected to be released no sooner than the end of this year, Rick said. It will provide analysis of the environmental, economic, social, cultural and physical effects of the new bridge.

In contrast, the PD&E study for the AMI Bridge was completed in 2010 and approved by the Federal Highway Administration in January 2016.

The study determined that construction of the bridge would have no negative effect on air quality, would not add to long-term noise and would not affect natural resources, such as coastal barriers, aquatic preserves and recreation areas.

The study also said the bridge would not harm the golden leather fern and the brown pelican but named 21 types of birds, fish and mammals that the span “may affect, but is not likely to adversely affect.” Among these were 11 kinds of birds, six types of turtles, two kinds of fish and the West Indian manatee and Eastern indigo snake.

In addition, the DOT says the bridge would disturb 1.2 acres of mangroves and 2 acres of seagrass. That disturbance would be mitigated, the DOT says, though the agency has not determined how.

“FDOT will coordinate with the appropriate regulator agencies during the permitting process to identify the viable mitigation alternatives,” Rick wrote in his email to The Islander.

The permitting process has not begun, he said.

Preliminary plans call for the bridge to be 69 feet wide, with each direction having a 12-foot travel lane, an 11-foot shoulder for emergency vehicles to pass and 10 feet of sidewalk.

The bridge would be built about 14 feet parallel and to the south of the existing bridge, which would be demolished once the new span opened.

But, for now, that’s all a ways off. The Federal Highway Administration estimated three years ago that completion would occur sometime before 2035.

That means little Andrew Carmona, who barely reaches above his grandfather’s waist now and can’t yet toss a crab trap, may be one of the first to drive his car across. Maybe he’ll be taking his grandfather for a ride while they reminisce about the great times they spent there back in the good old days.

The DOT allows drawbridge openings for the Anna Maria Island Bridge 6 a.m.-7p.m. at 15 minutes and 45 minutes after the hour.

The same schedule applies to the Cortez Bridge. Both open on signal 7 p.m.-6 a.m. The Longboat Pass Bridge opens on demand.

In many instances, the DOT said, between two and seven watercraft pass through the AMI Bridge during each opening.

Prolonged red tide in 2018-19 deceased the number of openings, thus the DOT does not consider it a typical year.