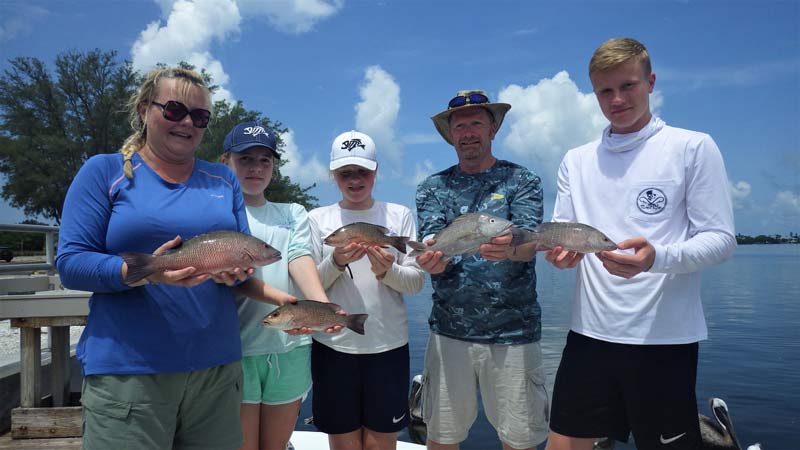 Fiona, Caitlin, Cara, Colin and Conner Barnes show off their success at catching nearshore mangrove snapper for dinner Aug. 19. The Barnes, who reside in both the United Kingdom and Anna Maria, were guided by Capt. Warren Girle.

With the vast amounts of rainfall we are receiving, fishing around Anna Maria Island has become slightly challenging.

Large quantities of freshwater flushing out of the Manatee River is causing inshore species to move from their usual spots to find higher salinity levels.

But don’t be discouraged. Species such as catch-and-release snook and redfish have a fairly high tolerance of the high levels of freshwater mixing into Tampa Bay. In fact, you may find that the flow of freshwater is moving some species out of the river — especially the redfish.

Juvenile tarpon are making a showing in Tampa Bay due to this effect. Another species you may encounter is the Florida gar, a freshwater species that can be found in Tampa Bay during extreme flashes of freshwater, like we are experiencing.

If you’re searching for fish to eat, you may find fishing a bit challenging if you remain in the inshore waters. Species such as the mangrove snapper and Spanish mackerel tend to dislike this freshwater mix and will move out toward the Gulf in search of saltier water. So, you might want to try fishing in the Gulf around structure and hard bottom to locate these species.

Traveling well offshore is the best bet, especially if you desire to put dinner in the cooler. An assortment of species — groupers, snappers, permit and amberjack — are being caught in depths of 60-100 feet of water.

On my own Southernaire charters, I’m targeting catch-and-release snook and catch-and-release redfish. Both species are requiring patience, but we’re catching quality fish on a four-hour morning charter. I’m also hooking into juvenile tarpon, which are always a welcome sight. The smaller tarpon, 30-40 inches, are exceptionally entertaining for sport anglers on light spinning tackle.

I’m also finding a decent catch-and-release trout bite along the edges of grass flats in 5-6 feet of water. Mixed in are numerous ladyfish. As for the mangrove snapper, I’m finding random fish around docks and even on the open flats while free-lining shiners.

Fishing structure in the bay is producing some mangrove snapper and Spanish mackerel for the cooler, and ladyfish and jack crevalle also are present in these areas.

Capt. David White of Anna Maria Charters is fishing inshore along the shorelines of Miguel Bay south to the Manatee River. Casting live shiners over shallow grass flats is producing some catch-and-release redfish and catch-and-release snook for his clients. Also, with the influx of freshwater due to the rainfall, White is finding juvenile tarpon in his travels. Casting live shiners or menhaden to these fish is attracting a bite.

Fishing structure in Tampa Bay is producing some mangrove snapper for White on his charters. Heavy chumming is key to getting the snappers in the mood for food.

Capt. Aaron Lowman is targeting mangrove snapper in the Gulf of Mexico. On days when the seas are calm, Lowman is venturing 5-9 miles in search of clear water. While fishing ledges and hard bottom, Lowman is putting clients on mangrove snapper, as well as an assortment of other species, including Spanish mackerel, Key West grunts, flounder and an occasional gag grouper.

Fishing in Tampa Bay is producing action on catch-and-release snook. Lowman is hooking up anglers with a few redfish around the mangrove shorelines in the vicinity of the Sunshine Skyway Bridge.

Mixed in with the bonito and macks are larger predators, such as blacktip and bull sharks. Both are being caught by chunking macks or bonitos and flat lining the chunks around the schooley fish. While fishing around offshore structure, Stock is doing well targeting permit. Also around the structure are numerous goliath grouper — an impressive hookup for any angler.

Jim Malfese at the Rod & Reel Pier says despite the water resembling the color of iced tea, anglers are reeling up a variety of fish. Catch-and-release redfish are the most apparent and are being caught on live shrimp fished on a bottom rig under the pier. Mangrove snapper also are being caught in this fashion. Using lightly larger baits — pinfish or mojarras — is resulting in some catch-and-release snook. Lastly, ladyfish and large jack crevalle are entertaining anglers who cast spoons or bucktail jigs from the pier.