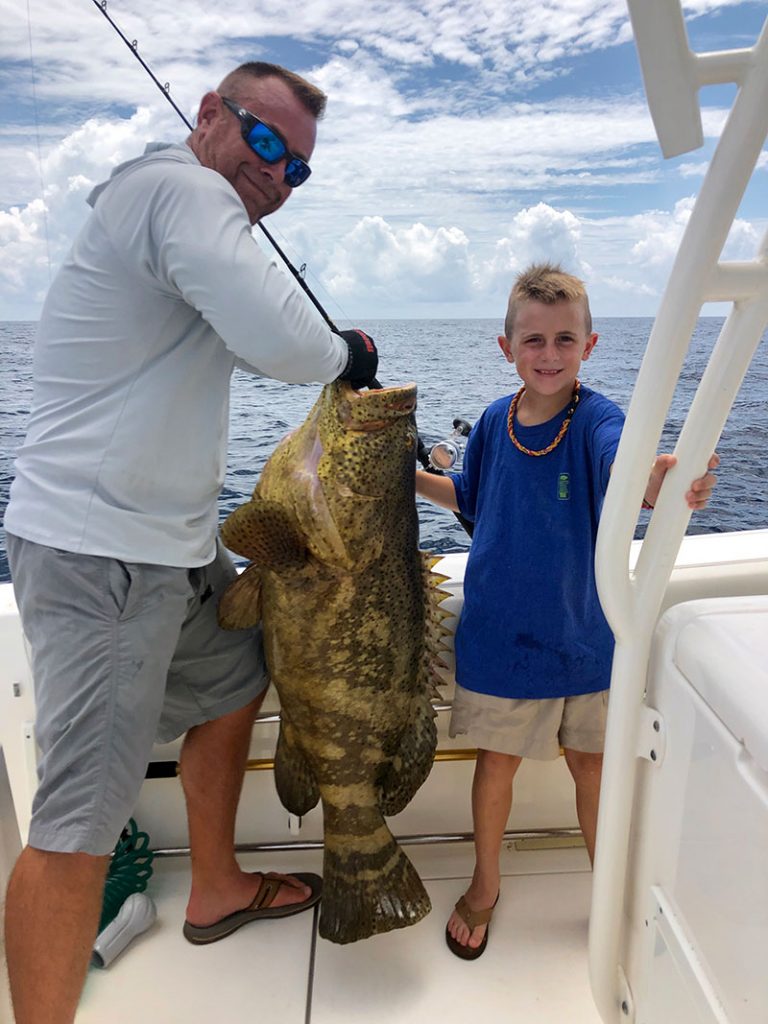 Another week of wet weather prevented some anglers from getting on the water, but those who were determined were rewarded with some good inshore action.

Fishing deep grass flats around Anna Maria Island is host to some exceptional fishing, especially for catch-and-release trout. Finding the right flat to fish can result in rallies of 20-30 trout without even pulling anchor. Mixed in with the trout bite are ladyfish, Spanish mackerel and some-keeper size mangrove snapper. You might have to tend to a few catfish, but hey, not everything is perfect.

Targeting the other species in the top catch-and-release trio, snook and redfish, is producing action for sport anglers willing to take on the rain. It’s not the spring or fall bite, but on good moving tides, you can get a rally going. It seems first thing in the morning is the best window of opportunity to get the fish to bite.

Moving offshore, reports of blackfin tuna are on the rise. Time to break out the rice and nori and get rolling. Sushi, that is.

Also offshore, anglers are enjoying action on yellowtail and mangrove snappers, as well as some hefty permit.

On my Southernaire charters, I’m enjoying the catch-and-release trout bite. On a recent morning, we counted close to 50 trout at the boat in an hour and a half. And half of those caught were slot-size fish. I’m finding conservation skills and the ongoing closure are resulting in a recovery for the species from red tide impacts. Mixed in were ladyfish and some macks, for a good bite.

Mangrove snapper are being caught, too, especially around structure — reefs and docks. Lastly, I’m seeing a few catch-and-release redfish and snook falling for our baits around mangrove shorelines and oyster bars. The bite seems best during early morning, swift-moving tides.

Capt. Aaron Lowman is finding good catch-and-release action on snook, redfish and spotted seatrout. For the snook and reds, Lowman is fishing around oyster bars and mangrove islands with live shiners as bait. Swift-moving tides are favorable when targeting these fish.

For the trout, slightly deeper flats are producing decent numbers of fish. Free-lining shiners or hooking a shiner under a popping cork are attracting the trout, as well as ladyfish and Spanish mackerel. Moving out to nearshore structure, Lowman is finding a mixed bag of macks, mangrove snapper, gag grouper and permit.

Capt. David White of Anna Maria Charters is tending the inshore bite as constant west winds have made it slightly uncomfortable for offshore anglers.

While inshore, White is hooking into catch-and-release redfish along the mangrove shorelines stretching from Miguel Bay south to Cortez. For bait, White is carrying an assortment of shiners, pinfish and menhaden.

Lastly, nighttime fly fishing for catch-and-release snook remains prolific, according to White, who says casting flies around snook lights in residential canals is “where it’s at.”

Capt. Jason Stock is finding blackfin tuna accommodating while working offshore in the Gulf of Mexico. Casting an assortment of artificials — top-water plugs or sub-surface lures — is resulting in some aggressive strikes from these high-speed fish. Live pinfish or cigar minnows on a flat line are attracting attention for clients when the tuna are chummed up behind the boat.

After wearing out on tuna, Stock is giving his charter clients a break by targeting yellowtail and mangrove snapper. Both fish are reacting nicely to an ample chum slick by rising off the bottom to the mid-water column. As the snappers are frolicking in the chum, Stock is free-lining baits or slightly weighting the rig with a split shot to present it to the fish. Lastly, Stock is putting his anglers on their share of permit over offshore wrecks.

Jim Malfese at the Rod & Reel Pier is seeing mangrove snapper being reeled up to the deck quite frequently by anglers using live shrimp as bait. Light fluorocarbon leaders and small hooks combined with a shrimp are coaxing the snappers to bite. The addition of a split shot may come in handy during quicker moving tides.

Mixed in with the snapper bite are flounder and an occasional catch-and-release snook. Most battles with the snook are short-lived, as the light fluorocarbon leader needed to catch the snapper is no match for the ferocity of a big linesider.

Casting spoons and small jigs out from the pier around the bait school is resulting in some Spanish mackerel, as well as a few jack crevalle and ladyfish on the hook.

Capt. Warren Girle is working the inshore waters of Tampa Bay. To start the morning, Girle is anchoring over structure in depths of 10-15 feet and chumming heavily with live shiners. As a result, Spanish mackerel, ladyfish and mangrove snapper are rising to the occasion. Free-lining shiners on a long shank hook among the chum bait is triggering a strike for his anglers.

Girle also is targeting spotted seatrout in depths of 5-6 feet over grass flats where the tidal flow is good. Free-lining shiners again attracts a bite.

Lastly, fishing shallow flats during high tides around mangrove edges is resulting in some catch-and-release snook.