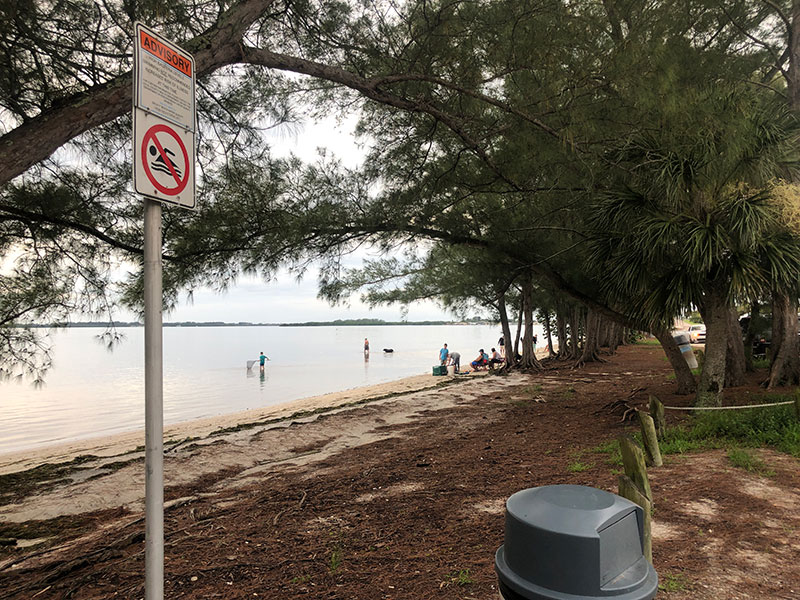 A sign warns of high bacteria levels Aug. 17 on the south side of the Palma Sola Causeway, where a boy dips a net and a man plays with his dog. 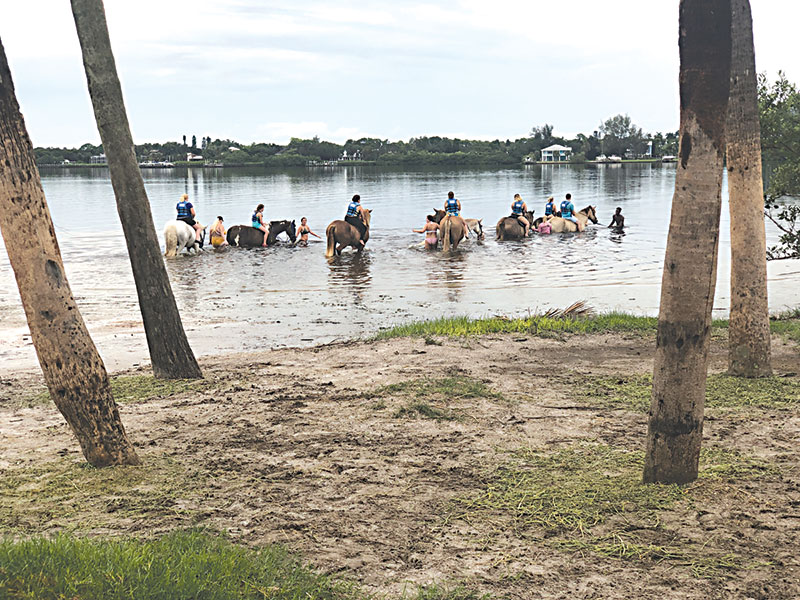 A group of eight riders leave the shore on the north side of Palma Sola Bay Aug. 17 for a surf-riding experience. The guest riders are accompanied by tour guides who walk the horses on leads. Islander Photos: Bonner Joy

Caution: Swimming is not advised in Palma Sola Bay — again.

The Florida Department of Health advised Aug. 15 that people should stay out of Palma Sola Bay on the south side of the Palma Sola Causeway where the bay is divided by traffic, due to high levels of fecal matter.

A posted sign on the causeway alerts swimmers to an “increased risk of illness” and refers inquiries to a state website.

The causeway beach is about 1,000 feet west of 81st Street on Manatee Avenue West.

The trigger for the advisory, according to Tom Larkin, director of Manatee County Environmental Health, was an Aug. 13 test of 96 colony-forming units of enterococci bacteria in 100 milliliters of water in a sample after a test the day before registered 767 colony-forming units.

The health department’s threshold for safe swimming is 70 colony-forming units per 100 milliliters of sample based on U.S. Environmental Protection Agency epidemiological studies.

Contact with the water may cause gastrointestinal issues, including vomiting and diarrhea, and increase the risk for infectious diseases.

Asked why the bay twice exceeded the EPA standard in as many months, Larkin wrote in an Aug. 16 email: “We don’t have any thoughts on the cause for the recent test results.”

He said the Florida Department of Environmental Protection will investigate wastewater treatment facilities within a mile “to determine if a facility experienced an incident that may have contributed to the contamination.”

Manatee County Commissioner Carol Whitmore voiced her concerns for the health of Palma Sola Bay at a July 30 Council of Governments meeting and in an Aug. 16 interview with The Islander.

Whitmore pointed to septic systems in Northwest Bradenton and horses — tourist attractions that provide “surf-riding” on horseback in the bay that are apparently authorized by the city of Bradenton and state of Florida — that could be associated with what she sees as a longstanding problem with the bay having a limited tidal flow.

The south side of Palma Sola Bay is one of seven beach locations in Manatee County tested weekly for the bacteria. The others are Bayfront Park in Anna Maria, Coquina north and south beaches and Cortez Beach in Bradenton Beach and Whitney Beach in Longboat Key.

As of the last week in July, the department began testing for enterococci once a week as new funding from the state became available, Larkin said. The testing previously was biweekly.

“Our sampling results this week indicate the other Manatee beach sites meet the guidelines for swimming,” he wrote.

No line break, lift station or other utility-related incident is to blame for the recent surge in bacteria in Palma Sola Bay, according to Manatee County Utilities Department spokeswoman Amy Pilson.

The last reported sewage spills in the bay occurred between December 2017 and February 2018 when contractors ruptured sewer lines and more than 6 million gallons of raw sewage spewed through the adjacent land and tributaries, according to county and state records.

The advisory will be in effect until the DOH testing shows the federal guidelines are met.

Larkin said the department will be testing next during the week of Aug. 19.

For more information, the advisory lists the website, www.doh.state.fl.us, and says to select “Beach Water Quality” from the A-Z topics list.