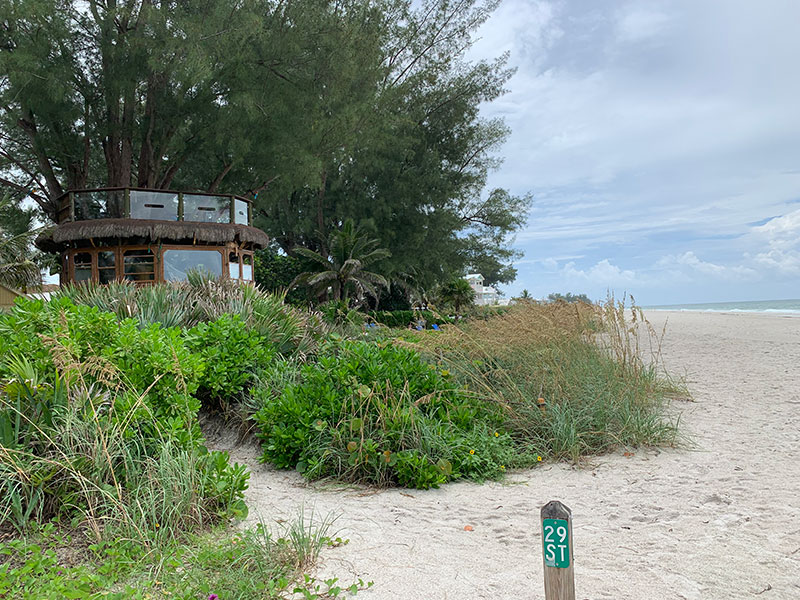 A treehouse built by Lynn Tran and Richard Hazen remains Aug. 14 on the beachfront in an Australian pine at their 103 29th St. property in Holmes Beach, despite six years of litigation aimed at having it removed. Islander Photo: Kathy Prucnell

Three strikes at a treehouse complaint and the case was thrown out of federal court.

The owners, who filed the case in March without an attorney, fired back Aug. 8 with a motion asking the judge to reconsider the ruling.

The motion said a court rule gave Tran and Hazen until Aug. 11 to respond to a DEP dismissal motion, calling the judge’s oversight “clearly an ‘extraordinary circumstance.’”

In an Aug. 14 email to The Islander, Tran added, “I don’t know what to expect, but pray that we have given the court good reasons to consider.”

The judge dismissed the treehouse owners’ case with prejudice — meaning the owners are precluded from re-filing the same claim — agreeing with city and DEP motions that the complaint made it difficult to understand “what facts relate to what legal claims.”

In his order, Moody found Tran and Hazen had “numerous opportunities to raise their claims in prior litigation” in state courts and the U.S. Supreme Court and “absent any new factual developments” there was no legal basis to revive the litigation.

Asked about the owners’ motion to reconsider, attorney Jay Daigneault of Trask Daigneault — the Clearwater law firm assigned the treehouse cases alleging money damage by the city’s insurer — was unconcerned.

“The treehouse cases are being defended aggressively, as they should be. We’re looking to bring them to a conclusion as quickly as we can,” Daigneault said.

Tran and Hazen reside at 103 29th St., where they operate four short-term rental units and built a beachfront structure — the two-story elevated treehouse — in an Australian pine tree, without city or state permits in 2011.

An anonymous complaint to the city triggered a trail of litigation, including the dismissed federal case. No other litigation is pending in federal court.

Three treehouse cases are pending in circuit court, as of Aug. 19.

In one case, a September hearing is set for city and DEP motions to dismiss a complaint by the owners alleging negligence and violation of rights and seeking injunctive relief and unspecified money damages.

Another case, in which the owners are represented by Sarasota attorney David Levin, of Icard Merrill, challenges a city ordinance requiring a 50-foot setback from the erosion control line. First filed in circuit court in 2013, the owners claim the setback is an unconstitutional taking.

The city contends the issue was decided already and cannot be relitigated.

Another pending case involves the city’s petition to enforce a special magistrate order requiring the treehouse be removed and assessing a $50 per day fine since July 2015 — now at more than $74,200.

Earlier this year, Circuit Court Judge Edward Nicholas ruled he would hear the state constitutional challenge prior to the city-initiated case.

The city and DEP’s motions to dismiss the owners’ pro-se complaint are set for hearing at 10:30 a.m. Tuesday, Sept. 10, in the Manatee County Judicial Center, 1051 Manatee Ave. W., Bradenton.