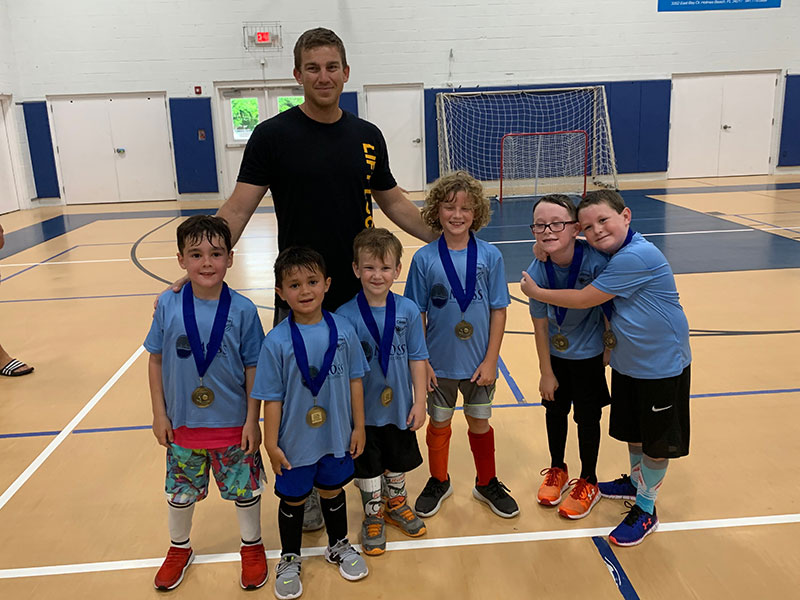 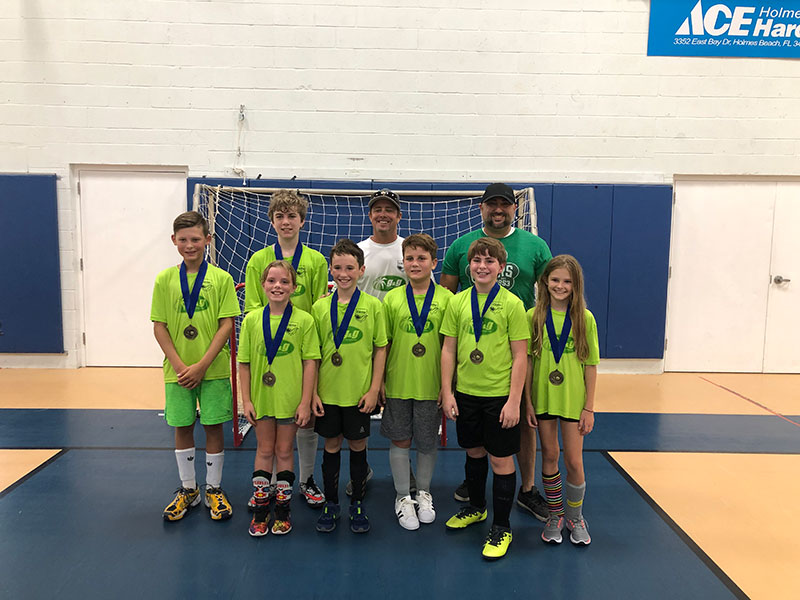 With the 2019-20 school year underway, summer vacation is officially over for island kids and so is the youth challenge in the indoor soccer league at the Center of Anna Maria Island.

Moss Builders and G&G Yardscaping were both the class of their respective age groups during the regular season and the championship game results followed suit.

Moss Builders rolled to a 6-3 victory over Ugly Grouper to the intermediate division championship behind a hat trick from Jackson Titen. Titen had some help from Mason Moss, who tallied two goals, and a goal from Dylan Sato.

Jackson Ross scored two goals to lead Ugly Grouper, which also received a goal from Jesse Zaccagnino in the loss.

G&G rolled to a 6-1 victory over AMI Locals in the advanced division championship behind five goals from Ryan Joseph and a goal from Connor Samblis.

Elek Brisson notched the lone goal for AMI Locals in the loss.

One season ends and one begins.

The adults took over the indoor soccer pitch at the Center of Anna Maria Island, completing a second week of action and three games Aug. 15, starting with Ugly Grouper taking on Slim’s Place.

Ugly Grouper rolled to an 8-3 victory behind five goals from Yuri Pereira and a goal each from Chris Klotz, Olaf Krause and James Roadman. Krause and Klotz split the goal-keeping duties and combined to make 16 saves to help preserve the victory.

Jose Casaras, Chris Culhane and Lexi Sato each scored single goals, while John Coleman made 13 saves between the pipes.

The second match of the evening saw Moss Builders roll to a 17-6 victory over Gulfview Windows and Doors behind five goals each from Juan Carlos and Miguel Ajoy. Omar Polar added four goals, an assist and seven saves, while Chavaree Pepe and Anil Akbulut both had a goal and an assist. David Greene made 11 saves to preserve the victory.

Nate Talucci scored three goals and Keith Mahoney added two to lead Gulfview Windows and Doors, which also received a goal and an assist from Emily Argeros and 13 saves from Jason Chiofalo in the loss.

Progressive Cabinetry cruised to a 13-3 victory over Sato Real Estate in the last match of the night behind five goals and two assists from Kevin Roman. Murap Akay chipped in with four goals and two assists, while Steve Oelfke and Jessica Williams each notched two goals. Diego Felipe helped preserve the victory with 14 saves in goal.

Ryan Moss and Josh Sato both had a goal and an assist to lead Sato Real Estate, which also received a goal from Ben Sato and a combined 14 saves from Mark Rudacille and Jason Sato in the loss.

Games in the adult flag football league at the Center of Anna Maria Island were rained out. Action will resume Aug. 22, weather permitting.

Yet again, persistent rains closed the golf course at Key Royale Club with the exception being Aug. 12, when the men managed to squeeze in nine holes.

Art McMillan won the men’s modified Stableford-system match with a score of plus-3 to edge second-place finisher Jon Holcomb by a point.

Horseshoe players held up by rain

Two teams emerged from pool play and were left to battle for the day’s championship during Aug. 14 horseshoe action at the Anna Maria City Hall horseshoe pits.

Tim Sofran walked his way to an early lead over Hank Huyghe and Sam Samuels and emphatically ended the match with a double ringer to put an exclamation point on a 25-9 victory!

Rain played a role during the Aug. 17 games, as Sofran and the team of Samuels and Jerry Disbrow were the last two unbeaten teams. Rain ended things before they could settle it in the pits and both teams shared bragging rights.

Cost is $30 per player and includes three games, shoes and an order of pizza or wings. Bowlers can sign up individually or as a team.

The tourney also is looking for sponsors, starting with the $500 signature lane sponsor, which provides for five bowlers, a Yeti-Center logo fishing shirt and a pitcher of beer.

A $200 lane sponsorship includes five bowlers and, for $150, a business logo is displayed on a lane and at check-in.

To register or for more information, contact the center at info@centerami.org or 941-778-1908.