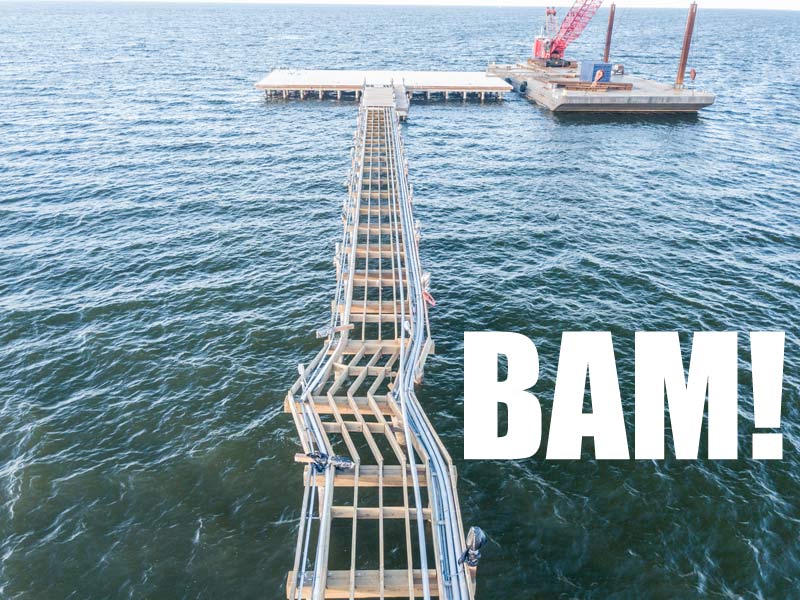 I+iconSOUTHEAST workers were installing planks on the Anna Maria City Pier the morning of Sept. 10 before the contractor’s barge, shown here at the T-end, rammed the pier and pushed a row of pilings and about 15-20 feet of walkway out of kilter. Islander Photos: Jack Elka 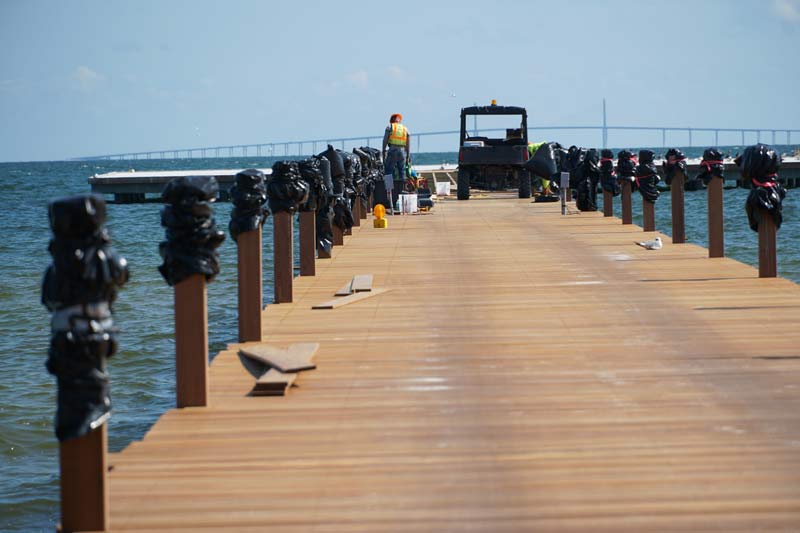 Before … I+iconSOUTH-EAST workers install planks on the Anna Maria City Pier the morning of Sept. 10 — before the contractor’s barge rammed the walkway. Islander Photo: Kathy Prucnell 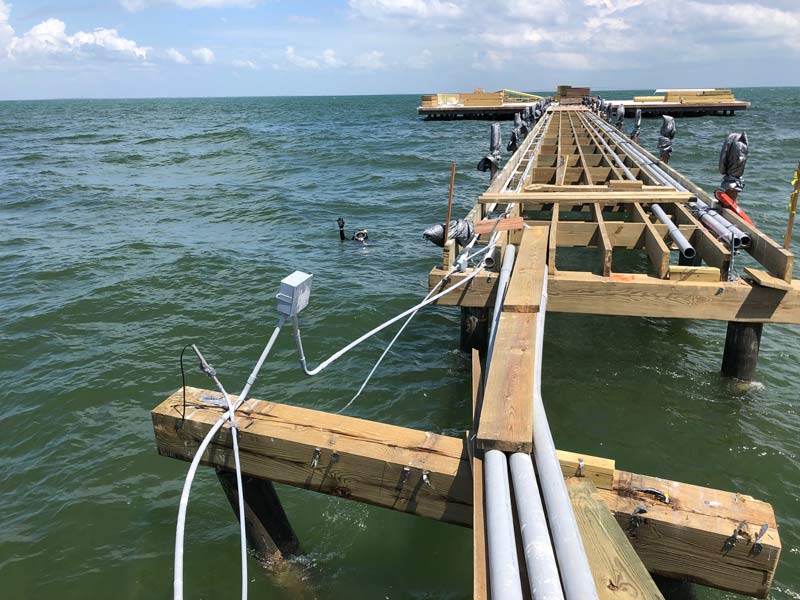 … and after crash A diver waves from the water Sept. 14 on the north side of the Anna Maria City Pier, where he surveys underwater damage to the pier after the contractor’s barge crashed Sept. 10 and pushed pilings and about 20 feet of walkway framing out of alignment. At the T-end, rafters and other materials for the restaurant, bait shop and restrooms are piled up, awaiting the start of construction. Islander Photo: Courtesy Anna Maria 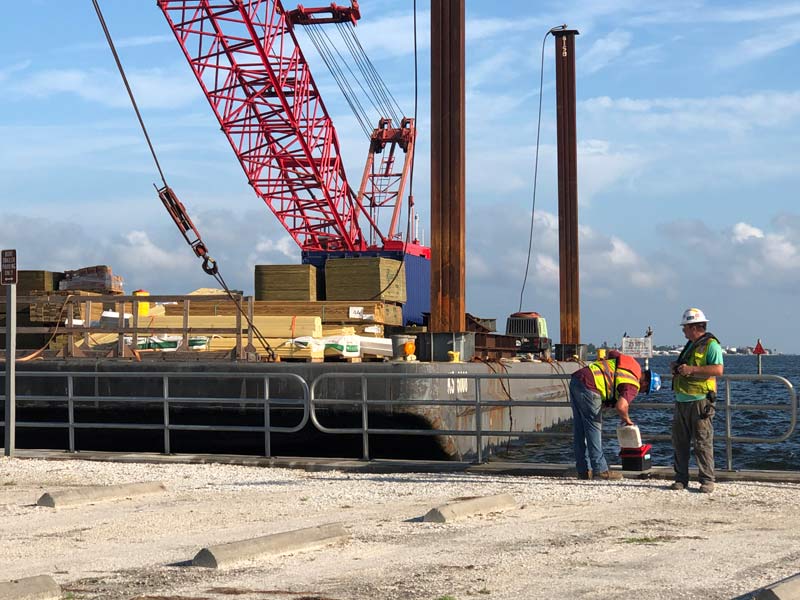 i+iconSoutHeaSt worker michael Butz, right, and a co-worker prepare Sept. 11 to deliver a load of building materials from the Kingfish Boat ramp in Holmes Beach to the anna maria city Pier on the barge that rammed the pier a day earlier. the materials are for the t-end buildings on the pier. islander Photo: ryan Paice 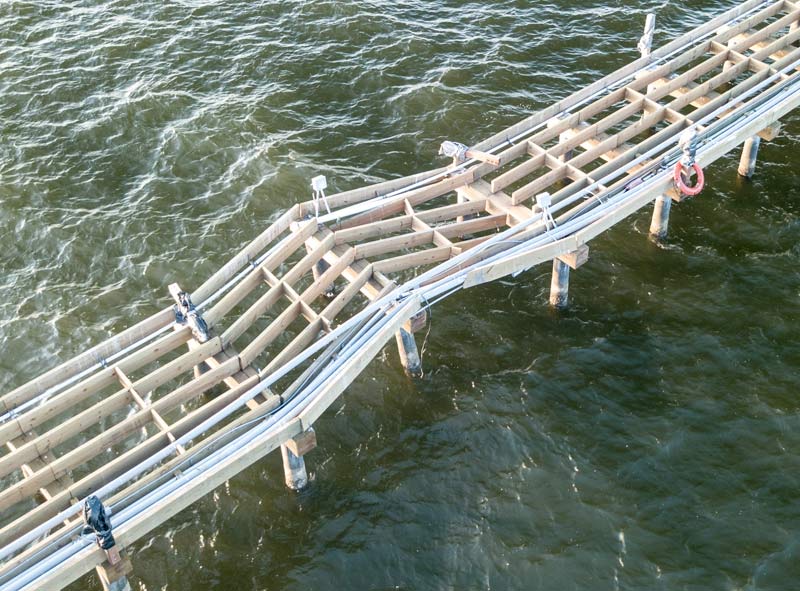 Hurricane Irma damaged the Anna Maria City Pier beyond repair in 2017, but the impact when the contractor’s barge crashed into the partially completed walkway Sept. 10 is only a minor setback for the ongoing project.

Work on the Anna Maria City Pier is proceeding — including an assessment by divers of the submerged pilings — despite the damage to a 15- to 20-foot section of the walkway.

The planking and T-end restaurant, bait shop and bathroom work will continue, according to Anna Maria Mayor Dan Murphy.

“The barge came in too fast,” he said of the crash into the pier.

The barge slammed into the 800-foot-long walkway about two thirds of the way out to the T-end of the pier.

Michael Butz, was operating the barge and lost control as he was attempting to dock for the night, Murphy said.

Butz, who works for I+iconSOUTHEAST, told The Islander Sept. 12, as he was preparing to move materials on the barge from Kingfish Boat Ramp in Holmes Beach to the pier, “Tell the people, I’m really sorry.”

The city contracted with I+icon in November 2018 to construct the 800-foot pier structure, walkway and T-end.

Work on the T-end buildings by Mason Martin construction is set to begin the week of Sept. 16, as previously scheduled.

Chief Zachary Gray of the U.S. Coast Guard-Station Cortez said a crew from Cortez was on scene after the crash Sept. 10 to ensure no one was hurt.

There were no reports of injuries.

He added the Coast Guard’s investigations’ division, headed by Chief Warrant Officer Ronald Jensen of Sector St. Petersburg, is in charge of the crash investigation.

St. Petersburg Sector Petty Officer First Class Ayla Kelley said Sept. 12 there have been no charges as a result of the incident and that one investigator visited the scene.

She also said the division was looking to determine why the collision occurred, interviewing the captain and any other witnesses, but had no further comment on the pending investigation.

What’s next for the damaged pier?

“I+icon needs to develop a plan to fix it. The engineer has to sign off,” Murphy said.

“And I will review any plan before the work starts,” he added.

Murphy didn’t have an estimate of the repair costs, but said I+icon is responsible for the damages caused by the barge, “whatever it is.”

Before the crash, Murphy hoped for a January reopening of the pier, but the bathrooms and restaurant are not expected to open at that time.

After the crash, the mayor said he didn’t know if that timeline would be affected.

The 1911 pier is being rebuilt due to damages sustained during Hurricane Irma in September 2017.