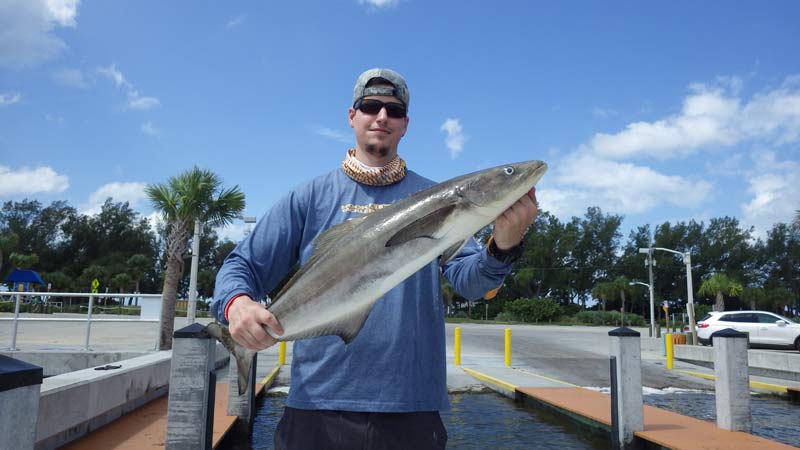 Flats fishing around Anna Maria Island and its surrounding waters is host to some good catch-and-release snook fishing this past week.

Linesider fishing is productive for sport anglers, especially along the eastern shorelines of southern Tampa Bay.

Fishing during the higher stages of the tide is proving to be good around mangrove shorelines, where good tidal flow exists. Bear in mind that during the higher tides, snook tend to be lounging in the shade of the mangroves. This being said, if you’re not an accurate caster, you might as well go trout fishing.

These snook have it made in the share and, no matter how many chummers you through out, they are not coming out of their resting places.

When casting, you’ll need to “skip” your live shiner under the bushes as far as it’ll go. And yes, there are numerous roots and oysters and barnacles to get in your way or even cut your line, but that’s the chance you’ll have to take. And once you’re hooked up? Oh boy!

Wrestling snook from the mangroves requires a lot of skill and a little luck. Especially if the fish is 30 inches or more.

Some strong braided line and heavy fluorocarbon leader will aid in your success, but the rest is up to you. Remember, if that fish us under the trees, point your rod tip down in the water. This helps to give your line a clear path to the fish and keeps it out of the bushes. As for the roots? Well, you can always pray to the fishing gods. Once the fish is out, you can raise the rod tip and enjoy the fight. But watch out for a second run as the snook attempts to scream out the drag and head back into the bushes again to find an oyster or barnacle to cut the line. If you’re lucky, the fish will come to the boat peacefully to be released, at which time they can return to the mangroves to wait for another meal to pass by.

Although this sounds a little stressful, let me warn you, it’s also addictive. Especially if the snook gets away. Veteran snook anglers will know the feeling.

And if you’re a novice, better work on your casting skills if you want to catch a linesider.

On my Southernaire charters, I’m concentrating on snook. Casting live free-lined shiners up against and under mangrove shorelines is providing action for my clients. Most snook catches are 20-30 inches with more fish coming in at the lower half of that spectrum.

With the vast amounts of bait present in Tampa Bay, I’m fishing for action in the deeper grass flats in 6-10 feet of water. In these areas, catch-and-release spotted seatrout are apparent as well as Spanish mackerel. In fact, the mackerel are so voracious, some of the spotted seatrout can’t get to the bait.

Lastly, mangrove snapper are once again in good numbers on both structure and on the grass flats. With less rain, the water is clearing up, which is allowing the snapper to flourish in Tampa Bay.

Capt. Aaron Lowman is targeting juvenile tarpon well up inside the Manatee River. He’s using live shiners or pinfish as bait, although casting artificials is attracting fish, Lowman feels live bait presentations are most apt to result in a hookup.

Moving into Tampa Bay, Lowman is putting anglers on spotted seatrout in the deeper grass areas during incoming tides. Free-lining shiners or using a popping cork is working well.

Lastly, catch-and-release snook are being reeled up in Terra Ceia Bay. Jack crevalle in search of an unsuspecting baitfish, also are being found while patrolling mangrove edges.

Jim Malfese at the Rod & Reel Pier is seeing numerous catch-and-release redfish being caught by pier anglers using live shrimp as bait. Casting these shrimp combined with a weighted rig under and around the pier is resulting in respectable numbers of these feisty fish.

Typically the R&R is known for large reds — 25-35 inches — but this past week has been slightly different. Most hookups are falling 15-20 inches. This still makes good catch-and-release action if you lighten up your gear a bit. Catch-and-release snook are being caught and are running slightly larger.

Pier fishers using live shiners, pinfish and mojarras are hooking into snook 20-35 inches. If you’re in search of dinner, mangrove snapper and Spanish mackerel are being caught with some regularity. And, conveniently, if you the fish are not biting, you can always meander up the stairs to the restaurant and enjoy some fine pier fare.

Capt. Warren Girle is working his charters on structure in the Gulf of Mexico and in Tampa Bay for mangrove snapper. Bottom fishing with live shiners is resulting in near limits of these fine-eating fish.

Also while fishing near structure, Girle is finding some Spanish mackerel and jack crevalle on the surface. Casting free-lined shiners to these fish is producing results.

Lastly, fishing the flats in Tampa Bay is providing action on catch-and-release snook and redfish. Both are being found along mangrove edges during the higher stages of the tide.