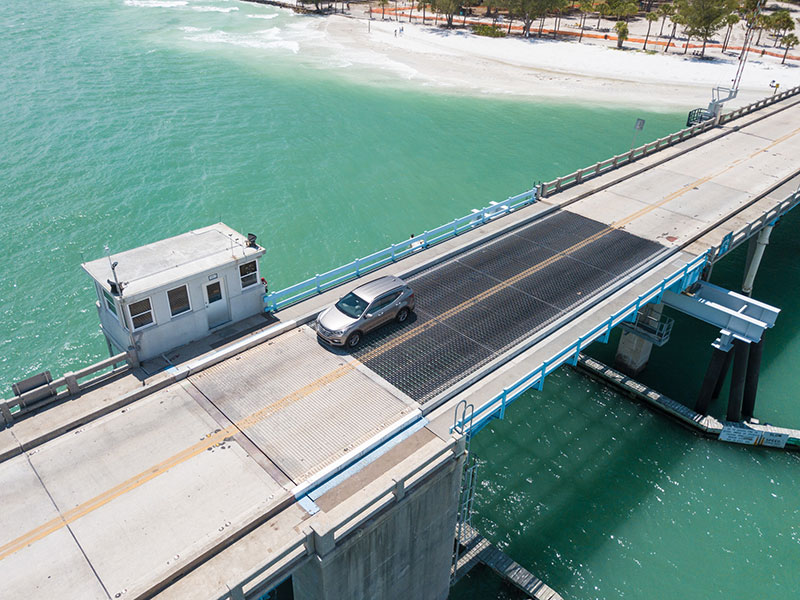 The Florida Department of Transportation says it expects to hire a consultant for $2.126 million early next year to help determine the fate of the 62-year-old Longboat Pass Bridge.

For a drawbridge, such as the Longboat Pass span, a consultant’s project development and environment study typically looks at several options, including repair/no build, midlevel drawbridge and high-level fixed bridge.

“The Longboat Pass Bridge PD&E study is scheduled to begin this fiscal year and will evaluate both fixed and movable bridge alternatives,” DOT spokesman Brian R. Rick said in a Sept. 13 email to The Islander.

The DOT has performed recent PD&E studies for the other two drawbridges — the Cortez Bridge and Anna Maria Island Bridge — that link Anna Maria Island to the mainland, and has recommended both be replaced by 65-foot-clearance fixed-span bridges, a move that has drawn opposition.

All three bridges were built in 1957 and the DOT considers the Anna Maria Island and Cortez bridges have outlived their 50-year lifespans.

The PD&E study will determine if that’s also the case with the Longboat Pass Bridge, linking Bradenton Beach to Longboat Key on State Road 789. The bridge has undergone four major repairs, totaling $9.77 million, in the past 15 years.

The latest, a $5.2 million project, started June 10 and is expected to be finished this fall. Officials say those repairs could add 10-15 years to the life of the structure.

The DOT aims to award the $2.126 million consultant contract in February, Rick said in a Sept. 18 email to The Islander. The agency expects the study will take at least three years, he said.

Funding for design, right-of-way acquisition and construction has not been allocated in the DOT’s 5-year work program, indicating construction may be at 10 or more years away.

The transportation agency will hold at least one workshop and one public hearing for the PD&E study, Rick said, though the dates and locations will not be made public until a few months before each meeting.

A PD&E study for the replacement of the Anna Maria Island Bridge — linking Holmes Beach to Perico Island on Manatee Avenue — was completed in 2010 and approved by the Federal Highway Administration in 2016.

A $6.2 million design for the 65-foot-clearance fixed-span replacement bridge will not be completed until fiscal year 2022-23, Rick said last month. Funding for right-of-way acquisition and construction has not been allocated, he said.

The PD&E study for the replacement of the Cortez Bridge is expected within the next few months, Rick said in August.

About $6.4 million for the design of the new bridge linking Cortez and Bradenton Beach has been allocated and an engineering firm has been chosen, but the DOT awaits the PD&E, which has yet to be made public.

The 65-foot-clearance fixed span the DOT said it will build over the Intracoastal Waterway on Cortez Road has drawn criticism from Cortez residents and others who say the bridge would destroy the character of the historic fishing village.

Whitmore said she recognizes that the Cortez Bridge must be replaced, but she favors a 45-foot-clearance drawbridge. Whitmore, the only commissioner on the seven-member county to voice opposition to the megabridge, appeared before the Island Transportation Planning Organization Sept. 16 to ask for support in blocking the DOT’s megabridge plan.