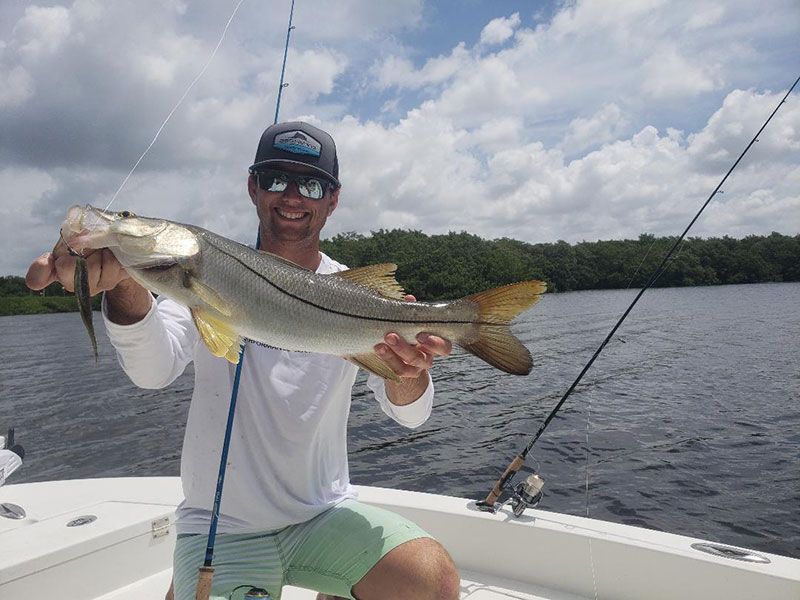 Max Monuese of Longboat Key shows off a nice snook caught in late August using shiners. Monuese, who grew up on LBK, celebrated his recent graduation from the University of North Florida with a guided fishing trip with Capt. Warren Girle. 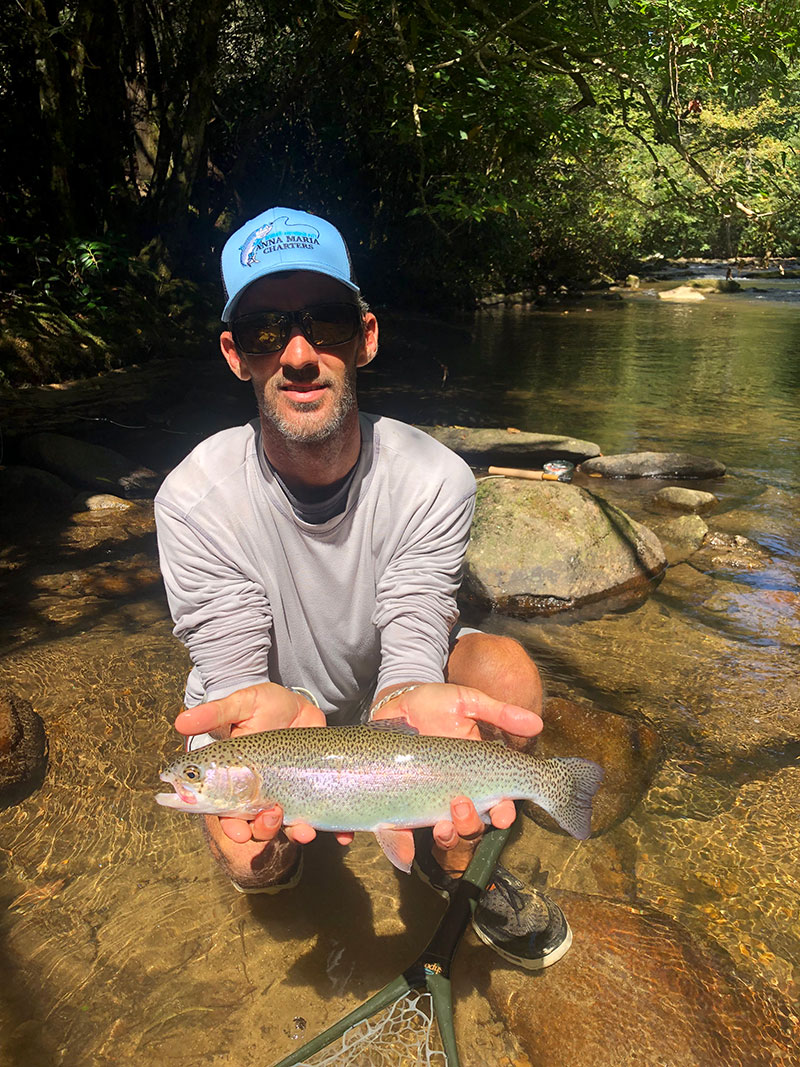 It’s a busman’s holiday— recreation that involves doing the same thing one does at work — for fishing guide David White of Anna Maria Charters, showing off a river trout caught on a fly rod. “Yeah it is! That’s how you know I’ve got the right job!,” White said in an Aug. 8 email to The Islander from Blue Ridge, Georgia, where he vacationed with family, and fished. “We’re loving it!” White fished with a buddy, Ryan Kauffman, who guides for Headwaters Outfitters out of Rosman, North Carolina. White took Kauffman and wife fly fishing when they visited AMI. Of the fishing in Georgia, White said he enjoys dry fly fishing. “Watching them take it off of the surface is awesome.”

If you can find the time to go fishing between summer’s anticipated storms and showers, Anna Maria Island is host to a number of good species for sport anglers and coolers.

That being said, “hooking” and “landing” can be two different things.

You can tell the pier regulars by their fishing gear. And if they’re targeting those big reds and snook, you better believe they’re doing it with stout rods and reels spooled up with heavy braided line. Trying to wrestle a big snook or redfish out from the barnacle encrusted pilings is not child’s play. There’s a lot of skill involved and always a little bit of luck — for the fish and the fishers. And, if and when the pier anglers get a big bite, good ol’ Jimmy Malfese is standing by with the landing net.

I bet Malfese has landed more big fish than anyone on that pier. He’s also quite adamant about gentle handling of the fish, and a quick release, so they can go back and make more fish.

Now, for anglers looking to get out on a boat and do some bay fishing, catch-and-release spotted seatrout are available. You can find Spanish mackerel and lady fish in the same areas — over deep grass flats in water depths of 6-8 feet. Free-lining live shiners will produce the best action, although artificials such as soft plastics or small jigs will work, too.

Dock fishing is producing action on some big catch-and-release redfish. Casting chunks or fresh-cut ladyfish is attracting the bull reds to the hook. You just have to know the right dock to target.

Lastly, mangrove snapper are being caught around structure in Tampa Bay — reefs, wrecks, rock piles and residential docks — and you should be able to muster up a few of these tasty fish.

Capt. Aaron Lowman is finding catch-and-release action on snook and redfish along the mangrove-lined shorelines of Terra Ceia and Tampa Bays. Casting live shiners under the mangrove limbs during incoming tides is producing action. Most catches are 18-25 inches.

Moving to slightly deeper flats is resulting in success on catch-and-release spotted seatrout, as well as some Spanish mackerel and ladyfish. Free-lining shiners or adding a popping cork to the rig works well. On calm days Lowman says that venturing into the Gulf of Mexico is putting clients on macks, mangrove snapper and an occasional gag grouper.

Capt. Warren Girle also is working the flats of Tampa Bay. Casting live shiners against mangrove shorelines during the higher stages of the tide is yielding catch-and-release redfish for his sport anglers. Most catches are 15-20 inches, with some bigger fish mixed in. Catch-and-release snook also are being caught in this fashion and are ranging slightly bigger, with sizes of 20-26 inches. Fishing structure in Tampa Bay is producing some mangrove snapper and Spanish mackerel.

Malfese at the Rod & Reel Pier is seeing anglers there reeling up a variety of species. Fishers using live shrimp are catching their share of mangrove snapper for their coolers. Bull redfish are keen on live shrimp, which is surprising the unsuspecting angler as he awaits a 12-inch snapper. The large catch-and-release reds are 28-36 inches and can put up quite a battle, even on the stiffest rod. Those opting to cast jigs and spoons are being rewarded with catches of Spanish mackerel, jack crevalle and ladyfish.

Lastly, soaking large live baits under the pier is attracting hefty catch-and-release snook. Baits such as large pinfish, mojarras or ladyfish are ideal for catching the lazy linesiders, which can exceed 40 inches in length.