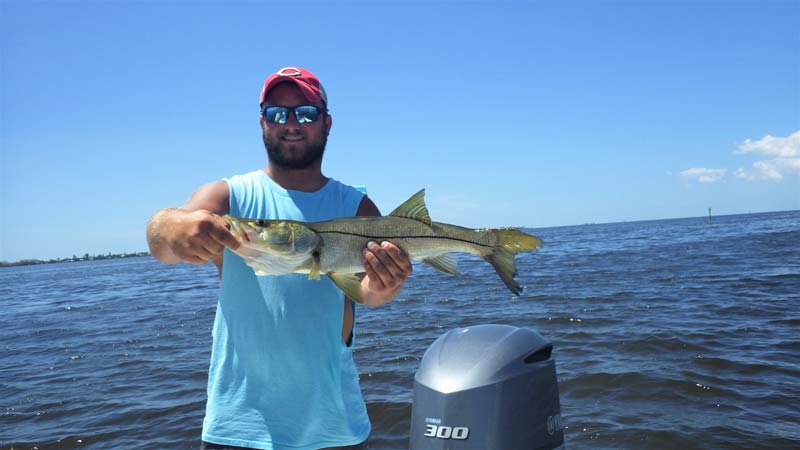 Dylan Taylor, vacationing on Anna Maria Island from Kentucky, shows off a catch-and-release snook. Taylor and friends caught numerous snook Aug. 23 using shiners for bait. They were guided to the fish by Capt. Warren Girle.

The catch-and-release redfish bite in local waters was the highlight around Anna Maria Island this past week.

Millions of gallons of fresh water flowing into the Gulf of Mexico from Lake Manatee pushed the fish toward the mouth of the Manatee River, as well as the adjacent waters of Terra Ceia Bay, Miguel Bay and Anna Maria Sound.

Finding schools of reds is achievable and ideal, although you can find foraging fish spread out along the mangrove shorelines and oyster bars present in our waters.

Both natural baits — live shiners and pinfish — are producing, as well as dead baits — fresh-cut chunks of ladyfish.

If using lures, use a Berkley Gulp shrimp on a jig head or the ever-faithful gold spoon.

Most catches, especially the schooley fish, are over-slot breeding fish — 28-35 inches. Remember to handle the fish with care. They’re the ones that ensure our future fishery.

If you’re fishing the mangrove edges and oyster bars, you’ll probably encounter slightly smaller fish, but don’t rule out the chance of catching a big one.

Fishing offshore in the Gulf of Mexico is a top producer for anglers in search of dinner.

Mangrove and yellowtail snapper are being reported in healthy numbers. Red grouper also are an option.

If you’re offshore, sport fishing for permit is another good bet. Limits on the fish are tight, but they’re worth a look-see. You’ll never forget hooking into the fierce-fighting fish.

On my Southernaire charters, I’m targeting catch-and-release tarpon and redfish along the banks of the Manatee River and its surrounding waters. Both are responding to live shiners and live pinfish as bait. Targeting catch-and-release spotted seatrout is proving to be worthwhile on the deeper grass flats of Tampa Bay. Mixed in with the trout are Spanish mackerel, ladyfish and bluefish — all of which provide quite a battle on light spinning tackle.

Lastly, for anglers who would like some fish for the frying pan, I’m targeting mangrove snapper on wrecks and reefs in Tampa Bay.

Capt. Aaron Lowman is venturing into the Gulf of Mexico when the seas are calm. Fishing over ledges and other structure is yielding mangrove snapper, gag grouper and Spanish mackerel.

The same applies for fishing structure in Tampa Bay, although, Lowman notes the Gulf fishing is slightly more productive.

On the flats of Tampa Bay, Lowman is finding action on catch-and-release snook, especially during swift moving tides.

Schooley catch-and-release redfish are being found in areas of Terra Ceia Bay and around the Sunshine Skyway Bridge.

Capt. David White of Anna Maria Charters is taking charters offshore to target yellowtail and mangrove snappers. Both species are responding well when he chums to flavor the waters. Free-lining live shiners into the chum slick is the clincher.

Bottom fishing for snapper is producing and, as a bonus, some hefty red grouper are being reeled up.

Moving inshore, White is entertaining his clients with juvenile catch-and-release tarpon and redfish. Both are present, thanks to the vast amounts of fresh water flowing out of Lake Manatee to mix with the saltiness of Tampa Bay. A handful of black drum and catch-and-release snook are being caught.

Capt. Jason Stock is running up an impressive permit bite in the Gulf of Mexico. Fishing over reefs and offshore wrecks is providing his clients with 12-20 pound catches. Numerous bites are occurring while free-lining live pass crabs over structure.

Also, on his offshore charters, Stock is putting clients on plenty of yellowtail snapper and Almaco jacks. The bite is enjoyable, Stock adds, until the sharks show up. Then things get a little stressful, because trying to keep hooked fish from the hungry sharks is not easy, even for the most experienced angler.

Jim Malfese at the Rod & Reel Pier is seeing a decent amount of redfish being caught and released. Anglers using live shrimp as bait are finding success at the pier. The average size of the reds is 20-25 inches, so hefty tackle is recommended if you plan on landing one.

Also, while baiting with live shrimp, anglers are reeling up mangrove snapper. Near limits of the tasty fish are attainable for patient fishers.

With vast amounts of hatch bait surrounding the pier, macks, ladyfish and jack crevalle also are a good bet.

Lastly, bouncing a bucktail jig tipped with shrimp off the bottoms is a great way to hook into a flounder or two. There’s always a couple just waiting to be caught by an experienced angler.

Capt. Warren Girle is fishing structure in Tampa Bay for mangrove snapper. To catch the snapper, Girle puts clients one of two methods.

The first method is bottom fishing using a 1/2-ounce egg sinker, which slides down the leader on top of a small circle hook. Girle can get his baits — in this case, small shiners — down to the bottom among the rocky debris and/or reef.

Snapper clinging close to the structure are apt to come out of their hiding places to investigate if they don’t have to go too far. In which case, this method will prove successful.

The other method is simply to free-line baits over structure. This method works well when the snappers are abundant and are present in the water column above the structure.

Chumming heavily aids in this method.

While chumming, Girle is attracting Spanish mackerel to the area, which adds variety to the bite.