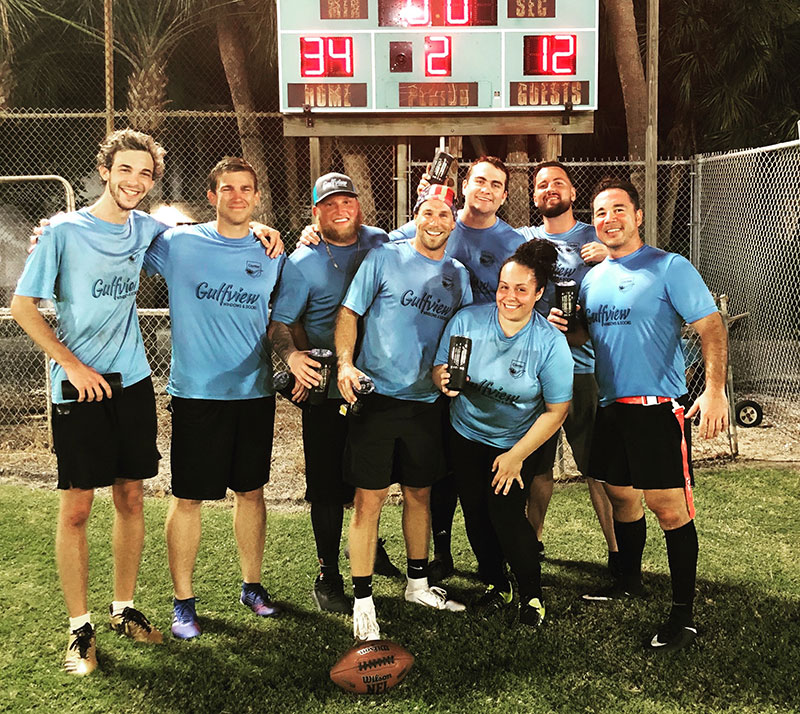 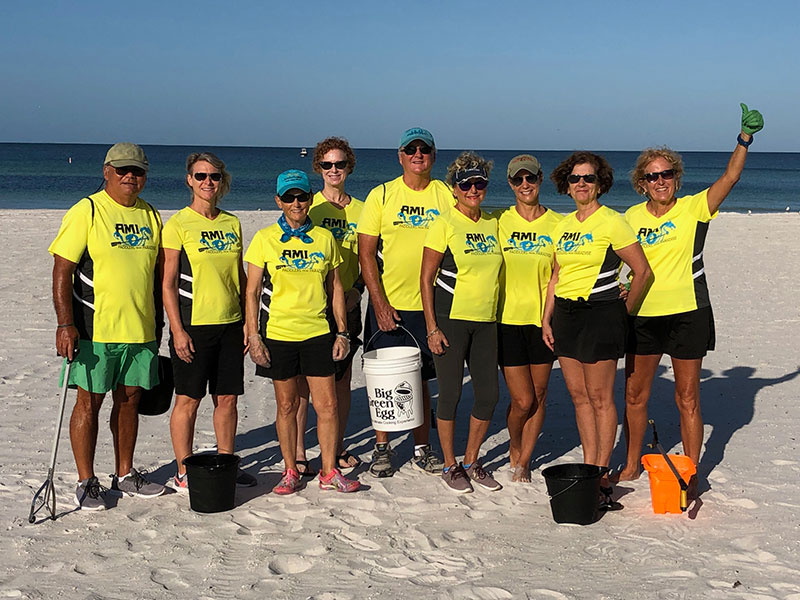 Gulfview Windows and Doors outlasted Hashmark Sports in the semifinal game, then rolled to a 34-12 victory over Lancaster Design in the Sept. 19 championship game to win the title in the Center of Anna Maria Island adult flag football league.

Tyler Lancaster helped spark the defense, which held Lancaster Design to a pair of touchdowns with a quarterback sack, while Brandin Holcomb came through with an interception.

Tim Shaughnessy and Mike Shaughnessy each had a touchdown pass to lead Lancaster Design in the loss, which also received a pair of touchdown catches from Anthony Mannino.

Gulfview advanced to the championship by outscoring Hashmark Sports 34-24 behind four touchdown passes from Moss. Holcomb, Dina Calvary, Demers and Sato all had touchdown receptions and Holcomb added a pair of extra points in the victory.

The first semifinal match saw Lancaster Design hold on for a 33-27 victory over Progressive Cabinetry behind five touchdown passes from Tim Shaughnessy. Karri Stephens had 11 receptions, including three for touchdowns, while Mannino finished with two touchdowns in the victory.

Jaret Rojas and Connor Haughey both threw a pair of touchdown passes for Progressive, which also received three touchdown catches from Brandon Kull and a touchdown from Ben Sato in the loss.

Wildcard matchups Sept. 19 kicked off the playoffs in the adult indoor soccer league at the center, leaving four teams to vie for the championship.

The first wildcard game saw the No. 5 Sato Real Estate roll to a 21-6 victory over No. 4 Gulfview Windows and Doors behind 5 goals and an assist from Adam Bujarski and Jason Sato. Ryan Moss and Mark Rudacille both added 4 goals and an assist — while Rudacille also found time to record 13 saves in goal. Josh Sato completed the scoring for the winners with three goals and three assists.

Keith Mahoney scored 5 goals to pace Gulfview, which also received a goal from Jason Chiafalo and 12 saves from Brandin Holcomb in the loss.

The second wildcard game saw No. 3 Ugly Grouper eliminate No. 6 Slim’s Place by an 18-8 score behind 8 goals from Connor Bystrom and 6 goals from Chris Klotz. Yuri Pereira had a goal and six assists for Ugly Grouper, which also received 2 goals and 14 saves from John Hagerty and a goal from Olaf Krause in the victory.

Joey Hutchinson had 5 goals and an assist to lead Slim’s Place, which also received a pair of goals from Clancy Vaughn and a goal from Lexi Sato. Robb Marshall recorded 20 saves for Ugly Grouper in the loss.

Semifinal action kicks off at 6:30 p.m. on Sept. 24 with No. 1 Progressive Cabinetry taking on Sato, followed by No. 2 seed battling No. 3, Ugly Grouper.

Brothers Dave and Neil Hennessey were paired up in the draw and jumped to an early lead and never looked back, rolling to a 22-5 victory over Sam Samuels and Tim Sofran for the day’s championship.

Two teams met in the Sept. 21 finals after posting 3-0 pool play records. Tom Skoloda and Sofran eeked out a 21-20 victory over Hank Huyghe and Jay Disbrow to earn bragging rights for the day.

There was a full week of golf action at the Key Royale Club in Holmes Beach, starting with the men’s nine-hole, modified Stableford-system match Sept. 16.

John Kolojeski and Sam Major both carded plus-4s to earn clubhouse bragging rights for the day.

The women were on the course Sept. 17 for a nine-hole, individual-low-net match. Ellen Boin torched the course with a 6-under-par 26 to grab first place by four strokes over Barb Krueger, who finished at 2-under-par 20. Jana Samuels was alone in third with an even-par 32, while Sue Wheeler and Terry Westby tied for fourth place at 1-over-par 33.

The men were back on the course Sept. 19 for a nine-hole scramble, which saw the team of Gary Alvord, Mike Clements, Jerry Martinek and Dick Mills match the 3-under-par 29 carded by Herb Clauhs, Ken Nagengast, Tom Nelson and Blake Ress and the team of Jerry Dahl, Jon Holcomb, Hoyt Miller and Ron Vandeman for a three-way tie for first place. No word on who had to buy the after-round drinks in the clubhouse.

You can chip, drive and putt “Ugly” and still benefit the Center of Anna Maria Island, 407 Magnolia Ave., Anna Maria, in the annual Ugly Golf Tournament — presented by the Ugly Grouper restaurant of Holmes Beach.

The cost to compete is $125 per person or $450 per foursome. The fees include a round of golf, lunch, dinner and a bevy of prizes.   The center also is looking for sponsors.