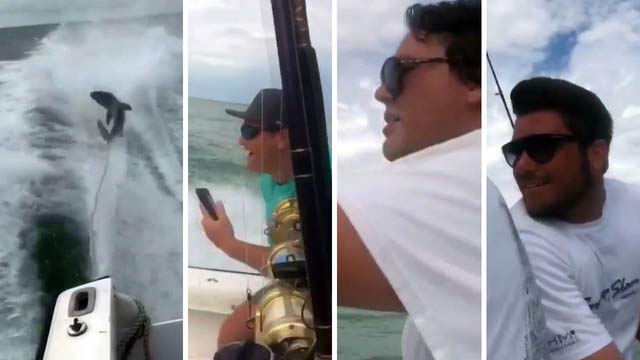 Screenshots from the viral video of a shark-dragging that occurred near Egmont Key in June 2017 show three of the four men as they watched the shark being dragged behind the boat. Islander File Photos

The shark-dragging case that entangled four men in cries of animal cruelty for months on social media has concluded.

“The Benac case is over,” said Mike Moore, 13th Judicial Circuit Court public information officer, after the last of the three defendants charged for the June 2017 shark dragging near Egmont Key reached a plea deal.

With a court-sanctioned agreement, Robert “Bo” Benac of Bradenton was sentenced Sept. 12 to 11 months probation, 10 days in jail, $2,500 fine, 250 hours of community service — half with an animal shelter — and a three-year revocation of his fishing license, according to Moore. Benac also received credit for one day served in jail after his December 2017 arrest.

Benac’s case stems from videos posted on social media showing him with three other men, Burns Easterling, Spencer Heintz and Michael Wenzel on a June 26, 2017, fishing trip in the waters north of Anna Maria Island.

One video shows the men laughing as the shark was dragged off the back of their speeding boat. Other videos showed them spearing and shooting sharks with guns.

The Florida Fish and Wildlife Commission and the state attorney offices in Hillsborough and Manatee counties spent six months investigating before filing the charges against three of the men, as public outrage on social media swelled to the governor’s office.

According to Moore, the felony aggravated animal cruelty charge levied for shooting a bull shark was reduced to a lesser charge and the same charge for the incident involving a blacktip shark — the dragging behind the fishing boat — was dropped.

A misdemeanor charge for violating an FWC rule that restricts methods of taking wildlife also was reduced for Benac, Moore said.

He is the son of Manatee County Commissioner Betsy Benac.

Wenzel, the boat’s captain, pleaded guilty in February to animal cruelty and use of an illegal method to catch a shark. He was fined $2,733.27 and sentenced to 10 days in jail and 11 months probation, including 100 hours of community service. Wenzel also lost his fishing license for five years.

Charges against Heintz were dropped by the state in May 2018 after prosecutors agreed his actions were not criminal.

Easterling cooperated with authorities and was not charged.