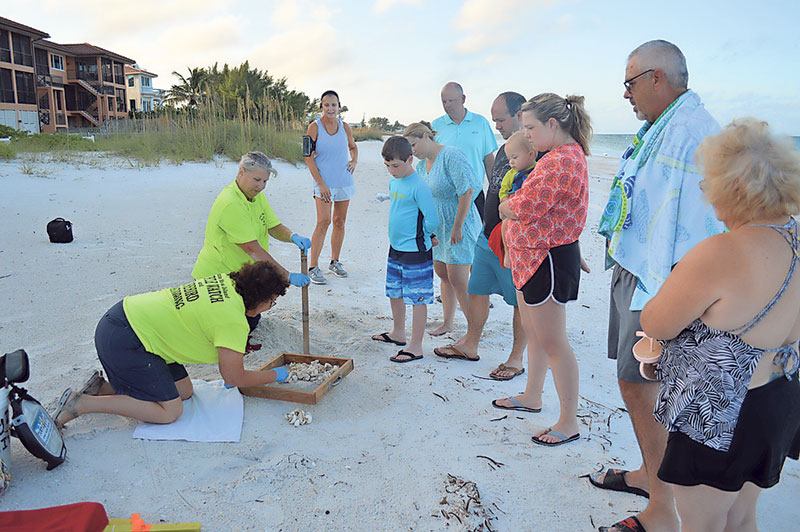 Loggerhead nesting is crawling to the finish line on Anna Maria Island.

And turtle watch is reporting another record-breaking season.

In August, Mote Marine Laboratory reported a record-breaking 1,326 nests on Longboat Key, with 5,063 total in the Sarasota area, including beaches on Venice, Siesta, Casey and Lido keys.

Until then, AMITW volunteers walk the beach each morning looking for new nests and the tiny tell-tale tracks in the sand leading from nests to the water, indicating hatched nests.

When a nest hatches, turtle watch waits 72 hours to excavate and collect data.

AMITW digs into a sea turtle nest to report data on how many eggs hatched. If there are live hatchlings, they will be released to the Gulf and any dead hatchlings or unhatched eggs are tallied.

Often, the hatchlings at the bottom of the nest are the weakest in the clutch, according to Suzi Fox, AMITW executive director.

Turtle watch and the Florida Fish and Wildlife Conservation Commission agree they should be given a chance to survive.

“Any time a hatchling can have at least 20 minutes of life in the ocean, we want to give them that,” Fox said Sept. 6. “If they don’t make it, that’s just part of the natural order of prey and predator.”

She said nests that hatch later in season often are the second or third nest laid by the female, and they can contain fewer than the usual 90-100 eggs.

Additionally, the longer eggs incubate in the sand, the more they are exposed to standing water from rain and high tides, which can drown embryos.

However, Fox said the hatch rate was strong at the beginning of season, and hatchlings are still emerging.

“We’re having another fantastic season with strong numbers,” Fox said.

“Hatch rates slow at the end of season, but we’ve still got almost two months left for the little ones to hatch and head out to sea.”