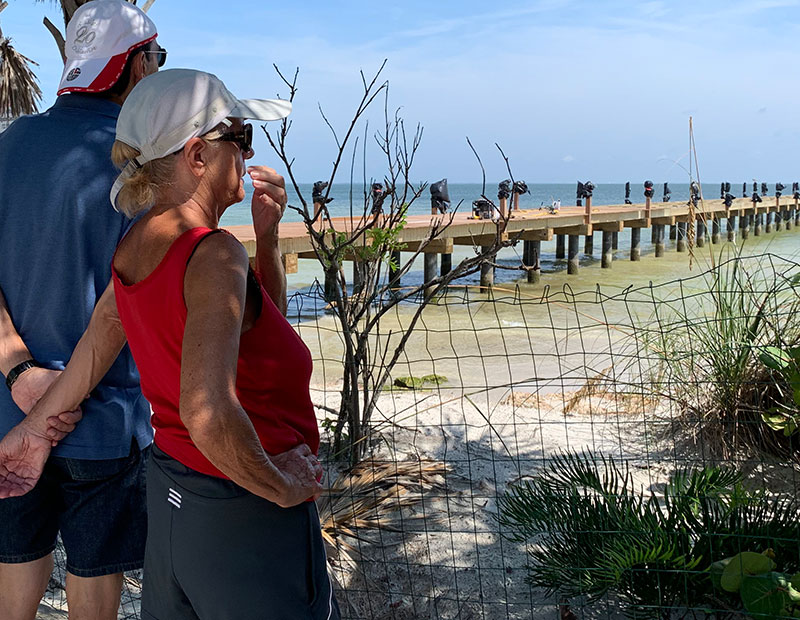 Alexander and Elizabeth Barthalis, both of Palmetto, check Sept. 5 on construction progress at the Anna Maria City Pier. A fisher for 10 years at the pier before it was destroyed by Hurricane Irma, Alexander Barthalis told The Islander he’s been keeping an eye on the work so he can return to fish. Islander Photos: Kathy Prucnell 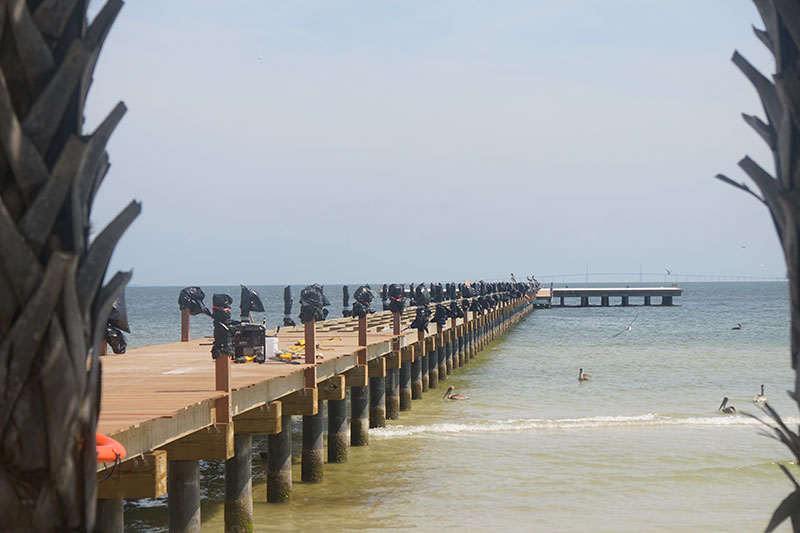 Construction work at Anna Maria City Pier was delayed two weeks, until mid-September, by precautionary measures in advance of Hurricane Dorian’s approach in the Atlantic Ocean.

Murphy said Sept. 9 that he expects the walkway will be done by Sept. 13, although some openings will be left for utility access.

I+conSOUTHEAST, the city’s pier contractor, enacted a hurricane preparedness plan Aug. 30 to protect the $5.9 million project, that removed the plywood walkway, covered light posts and secured the Ipe planks and other materials at the site.

The city contracted with I+con in November 2018 to replace and reconstruct the pier after Hurricane Irma damaged it in September 2017.

The path of Dorian spared Southwest Florida, although the storm caused vast destruction in the Bahamas and slammed the Outer Banks in North Carolina before spinning northward along the Atlantic coast.

With the timeline pushed from Sept. 1 to mid-September, January 2020 is the target date for the reopening the pier to the public, although the T-end buildings will be shells.

Construction plans for the restaurant, bait shop and restrooms do not include interior improvements.

The city entered a $967,000 contract in July with Mason Martin of Holmes Beach to rebuild the wood-frame structures — not the interiors.

Mason Martin is expected to deliver materials by barge to the T-end Sept. 13-14, including trusses and beams, and begin work Sept. 16, Murphy said.

Meanwhile, negotiations are ongoing for a new lease for the restaurant operations with Mario Schoenfelder, who holds the current lease through December 2020. His lease payments were suspended after the pier was deemed destroyed.

Schoenfelder extended an offer in July for lease payments of $12,000 a month, beginning in December 2020, and no security deposit, for the T-end, restaurant, bait shop and bathrooms, as well as parking and the boat landing. He stipulated payments would begin after the first six months of operation to offset the costs of getting the business started.

However, the city has new terms in its plans.

In August, the commission determined Schoenfelder’s new lease would exclude bathrooms and other common areas and require a contract for maintenance from a third-party management company.

Still to be negotiated are the lease terms, insurance requirements and taxes, as well as parking, but a pro-rata allocation based on square footage would be a “logical approach,” Murphy said Sept. 5.

He said he and Schoenfelder have been discussing a 10-year lease with an option for 10 more years.

In subsequent emails to Murphy, Schoenfelder objected to presenting his investment offer as $250,000, saying the equipment, valued at $250,000, would remain after his lease.