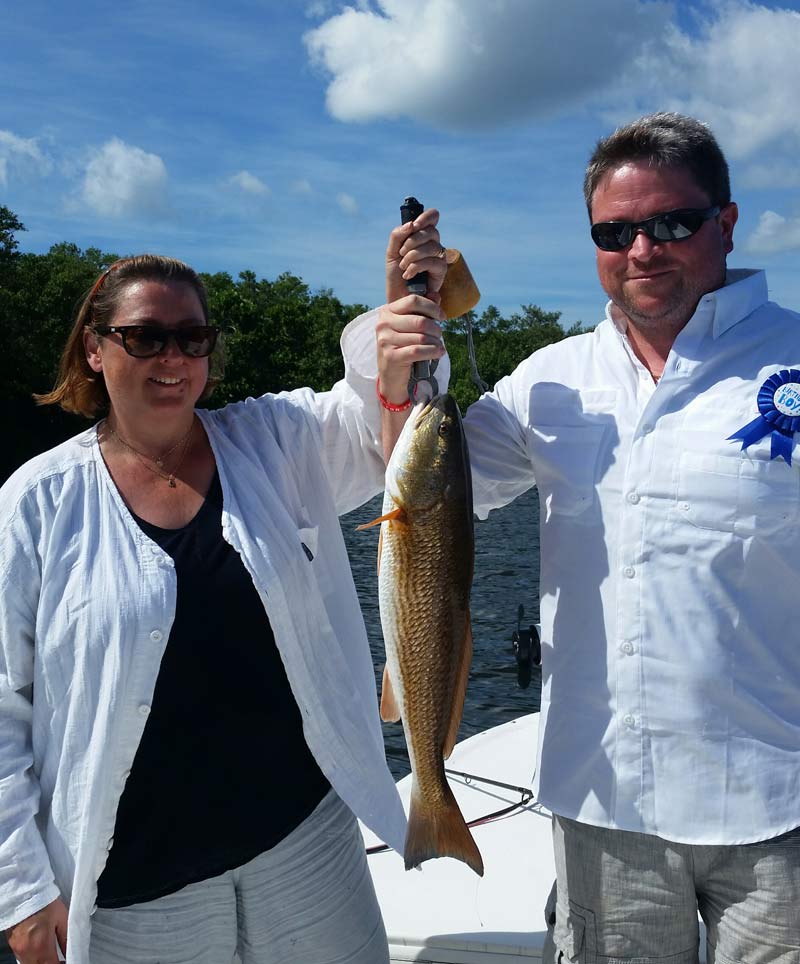 Tony and Catherine Bannister of the United Kingdom show off one of many redfish they caught on an Oct. 14 charter with Capt. Aaron Lowman. The couple teamed up on plenty of redfish, snook, seatrout, spanish mackerel and mangrove snapper — all fish on light tackle with live shiners as bait. Everything but a few macks and mangrove snapper were released. 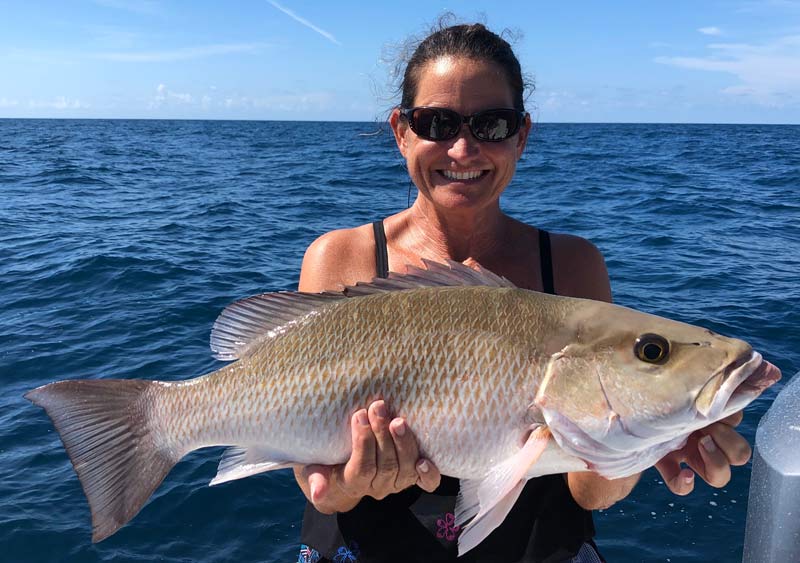 Tracy Bromlow of Panama City shows off a big mangrove snapper caught Oct. 15 on a live pinfish in 120 feet of water while fishing with Capt. David White of Anna Maria Charters.

Fall fishing around Anna Maria Island is shaping up to be quite good when targeting native and migratory species.

On the flats, numerous catch-and-release snook are on the feed in attempts to fatten up for the winter.

Catch-and-release redfish are arriving on the flats in good numbers and are equally eager to take a bait in preparation for winter.

Slightly deeper grass areas with 5-8 feet of water are host to catch-and-release spotted seatrout, as well as numerous other species, including ladyfish, Spanish mackerel, jack crevalle and many juvenile gag grouper.

So, yes, inshore fishing is good and getting better as we move through fall.

Moving offshore, reports of yellowtail snapper and mangrove snapper remain consistent for another week. Respectable sizes of both are being taken around offshore wrecks, especially hard bottom areas. And, speaking of bottom, red grouper are present offshore, readily eating offerings of frozen and live baits.

On the surface, migratory species — blackfin tuna and kingfish — are ravaging bait schools and whatever else crosses in front of their noses.

On my Southernaire charters, I enjoy watching my clients reel in mackerel. These high-speed voracious predators are quite fun when caught on light spinning tackle. Long drag-screaming runs followed by a head shaking fight to the end keeps anglers coming back for more.

When in search of dinner, Spanish mackerel are sufficient if prepared right and eaten the same day. For those who have an aversion to mackerel, I’m targeting mangrove snapper. Limits of the sweet-flavored fish are being reeled up from their sanctuaries in the wrecks and reefs. Most are being caught while bottom fishing, although during slack tides they can be taken while swimming high in the water column, especially when a chum slick is present.

Capt. Aaron Lowman is finding good Spanish mackerel and mangrove snapper bites in the Gulf of Mexico and in Tampa Bay. Fishing structure such as artificial reefs and wrecks host both species and in abundance.

Along the beaches of Anna Maria Island, Lowman is finding action on black tip sharks using fresh-cut chunks of Spanish mackerel as bait. The sharks measure 3-5 feet in length.

Moving to the grass flats, Lowman is catching and releasing numerous snook and quite a few redfish. Freelining shiners around mangrove shorelines is providing the best action.

Lastly, spotted seatrout are being found over deep grass during swift incoming tides.

Capt. David White of Anna Maria Charters is having good luck offshore on a variety of species. Mangrove and yellowtail snapper are filling the coolers for White’s clients. Red grouper are taking the hook.

Targeting American red snapper is providing action while offshore. Patrolling wrecks and reefs is resulting in some kingfish and Spanish mackerel.

Moving inshore, White is enjoying catch-and-release action on snook and redfish. Spanish mackerel and mangrove snapper are being caught, especially around structure in Tampa Bay.

Capt. Jason Stock is in pursuit of blackfin tuna around the offshore wrecks in the Gulf of Mexico. Casting live baits or lures is attracting these high-speed footballs to the surface to strike a bait. While targeting the tunas, Stock is encountering king mackerel, which also put up a fierce battle when hooked.

Bottom fishing while offshore is providing action, especially on mangrove and yellowtail snapper.

While targeting these snappers, an abundance of almaco jacks are finding their way to the hook.

Jim Malfese at the Rod & Reel Pier is seeing Spanish mackerel being caught by anglers using artificial bait such as jigs and spoons. Casting these lures out around the bait schools and quickly retrieving them is resulting in macks up to 20 inches.

Mixed in with the mack bite are jack crevalle, blue runners and ladyfish. Using live shrimp as bait is still attracting mangrove snapper to the hook. Limits of these tasty fish are attainable by determined anglers. Casting live shrimp on a weighted rig under the pier works well.

Capt. Warren Girle is fishing the nearshore ledges in the Gulf of Mexico. By bottom fishing with live shiners as bait, Girle is reeling up numerous mangrove snapper. Limits of the fish are being caught, with some reaching 20 inches.