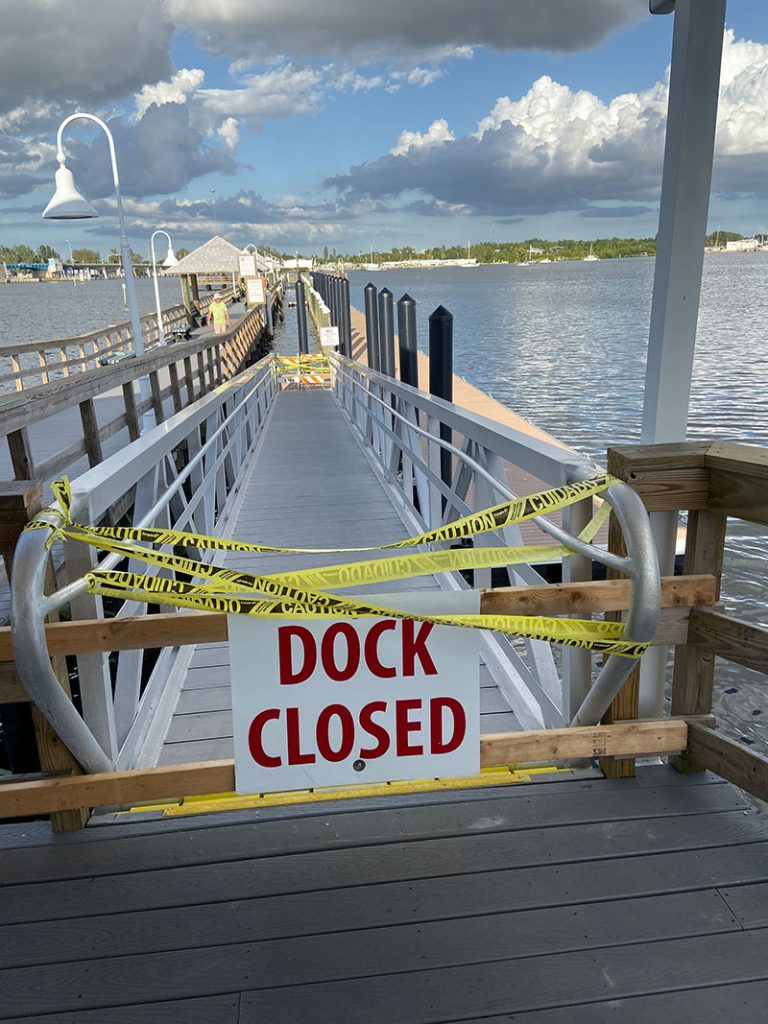 The entrance to the floating dock at the Historic Bridge Street Pier in Bradenton Beach remains closed Oct. 10 due to safety concerns with the gangway that connects the dock to the pier. Islander Photo: Ryan Paice

Problems with a gangway providing people access to the floating dock at the Historic Bridge Street Pier in Bradenton Beach led to the dock’s closure.

The dock was installed in August, but the gangway — the walkway connecting the dock to the pier — was part of the installation of the original dock in 2015.

The gangway was pulling from the pier at the connection and flexing when walked upon. Woodard informed Police Chief Sam Speciale and building official Steve Gilbert about the issues.

Speciale contacted Gibsonton-based Hecker Marine Construction, the contractor that installed the $191,524 dock. Hecker responded that it can’t be held responsible since the installation of the gangway was not in its contract.

Woodard asked Steve Porter, general manager of Duncan Seawall in Sarasota, to look at the gangway and Porter concluded the connection was inadequate and needed to be re-engineered.

So, Woodard contacted Warburton, who said he would expedite a written evaluation, including a suggested repair.

The city will need to hire a contractor to repair the gangway.

In the meantime, the dock remains closed.

“I understand that the day dock has been unavailable for use for too long already, but the liability must be addressed,” Woodard wrote to The Islander.

City officials opened the dock for public use Aug. 2, after two-and-a-half years of turbulence due to failures by the company originally contracted to build and install the dock. The dock replaced one removed in 2017 due to damage by storms — and crashing boats that broke anchor.

Sherman Baldwin, the owner of Paradise Boat Tours, which launches boat tours from the dock, isn’t concerned with the setback.

“Obviously, safety first,” Baldwin said. “I appreciate the city identifying a problem and working toward a solution as quickly as they have. And, frankly, I’m very thankful it’s happening now and not in the middle of high season!”