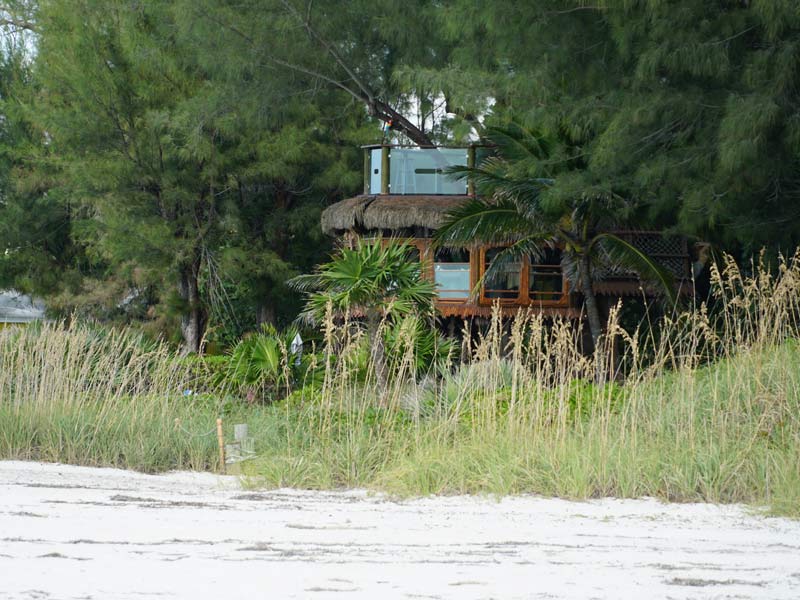 Holmes Beach and the Florida Department of Environmental Protection are taking aim at the long-running dispute over a treehouse they say should be over.

Motions filed Oct. 14 by the city and the DEP seek to dismiss a lawsuit treehouse owners Lynn Tran and Richard Hazen brought in December 2018 — one of two pending cases brought by the owners where they are representing themselves. In two other cases, Tran and Hazen are represented by Sarasota attorney David Levin of Icard and Merrill.

Included in the city’s Oct. 14 motion is a request that the 12th Judicial Circuit Court prohibit the owners from filing further such actions “without prior judicial approval.”

The beachfront treehouse — the subject of six years of wrangling — was built in 2011 at Tran and Hazen’s residence, which also houses Angelino’s Sea Lodge, four seasonal rental units at 103 29th St.

The four pending treehouse cases center on Tran and Hazen’s failure to obtain state and local permits in light of a city land-development code requiring a 50-foot setback from the state erosion-control line. An erosion-control line separates private from public beachfront property on renourished beaches.

“The facts that started this are over eight years old. The litigation must come to an end,” said attorney Randy Mora of Trask Daigneault, the Clearwater law firm assigned to the case by the city’s insurer.

Mora’s motion attacks the owners’ second amended complaint alleging 10 legal theories against the city and seven against the DEP. The motion also attacks the request for money damages and the owner’s attempts to halt orders to remove the treehouse and fines.

Mora raised a legal doctrine that bars litigation between the same parties following a final judgment on the “same nexus of facts.”

He said Judge Janette Dunnigan’s 2014 decision “meticulously analyzed no fewer than 13 different theories the plaintiff’s raised to challenge the code enforcement board’s holding” — and that the finality doctrine extends to “actions that are raised or could have been raised.”

In three state court cases and one federal case, the treehouse owners continue to appeal DEP and city decisions that denied the structure an after-the-fact permit, saying the city land-development code conflicts with state law.

The city, as well as the DEP, however, say in the court papers that the question has been decided.

DEP senior assistant general counsel Lorraine M. Novak filed a motion to dismiss in the owners’ pro se state case Oct. 14. The state regulator initially objected to the treehouse due to its proximity to the dunes and deferred to the city as far as issuance of an after-the-fact permit.

The owners are impermissibly “splitting their claims” between different cases “and in some cases attempting to re-litigate issues,” Novak’s motion states.

The other pending case Tran and Hazen filed without an attorney is in the 11th Circuit Court of Appeal. The couple is appealing their loss in the U.S. Middle District of Florida on due process, takings and civil rights claims.

They allege due process claims for improper code enforcement proceedings, takings arguments concerning the treehouse removal and civil-rights violations that include excessive fines.

Jay Daigneault of the Trask firm is handling the federal appeal for the city. He plans to file a response to the Oct. 15 Tran-Hazen initial brief in “a month or so.”

Daigneault agreed with Mora, saying the Tran-Hazen case filings “have to end.”

In the two other cases in state court — a city-initiated enforcement action filed in February 2018 and a declaratory judgment lawsuit first filed in 2013 — the owners are represented by Levin.

Jim Dye, a partner of city attorney Patricia Petruff at Dye Harrison, is representing the city on the enforcement of a 2016 city decision to remove the treehouse and a daily $50 fine. That fine has grown to more than $77,750.

The judge decided in April to hear the 2013 case prior to the city enforcement case.

Tran said Oct. 24 she hadn’t read the motions to dismiss and sanctions in the 2018 pro se case, but said the federal appeal “is moving forward.”

“It’s been a long arduous process,” she added.

Judge Edward Nicholas set the Nov. 15 court date in April but attorneys for the city and treehouse owners Lynn Tran and Richard Hazen now disagree on what will be addressed at the hearing.

Mora filed a motion Oct. 9 asking the judge to clarify the matter.

According to the motion, Tran-Hazen’s attorney David Levin opined that the Nov. 15 date should be a hearing on the merits and the legality of the city ordinance adopting the land-development regulations.

Mora said, “As a matter of procedure, we’re not there.”

Tran told The Islander Oct. 24 she had no comment on cases Levin is handling.

The cases will be heard at the Manatee County Judicial Center, 1051 Manatee Ave., W., Bradenton.