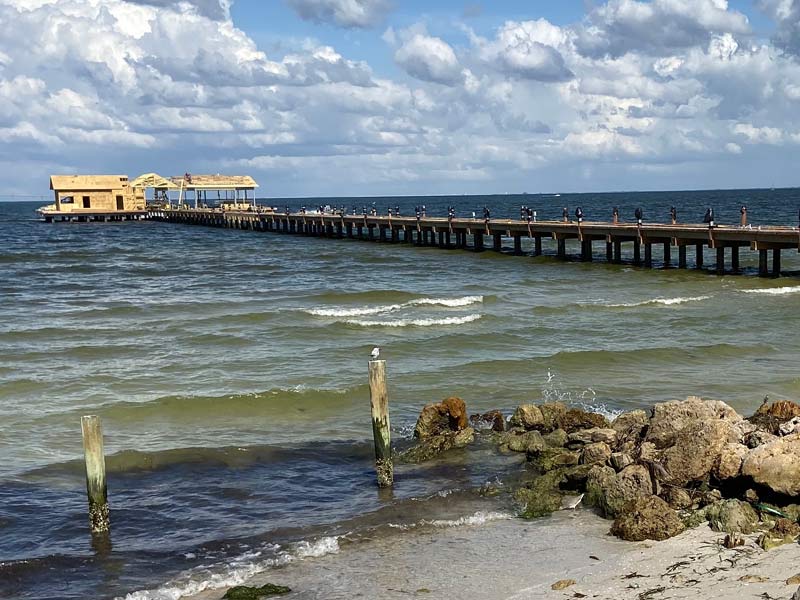 A Mason Martin employee works Oct. 25 on the roof at the T-end of the Anna Maria City Pier. Islander Photo: Ryan Paice

Construction of the new Anna Maria City Pier restaurant and bait shop is humming along, but a potential wrench in the works might hold up the progress.

Mayor Dan Murphy told city commissioners Oct. 22 there is a conflict between the architectural design and engineering that might delay the pier’s opening date.

In light of some setbacks — including an i+iconSOUTHEAST employee in a barge ramming and damaging the pier walkway — the city had hoped to open the pier in late January or early-February 2020, but the conflict could push that date forward.

The mayor had planned a meeting last week to “get to the bottom” of the issue, determine who is responsible and assess the scope of any delay in construction.

“Hopefully it will only be a minor issue,” Murphy said before the meeting planned for Oct. 23 was canceled. He said “it wouldn’t be fair” to address the problem without the facts and declined to elaborate.

Murphy told The Islander in an Oct. 25 email the meeting was pushed to Thursday, Oct. 31, because a “key player” was not available.

But the contractor pulled out of the running to bid the interior work on the restaurant, restrooms and bait shop.

Murphy told the commission that Mason Martin, owned by Frank Agnelli and Jake Martin, withdrew its option to bid on the interior work.

Mason Martin’s decision came a week after Mario Schoenfelder, the pier tenant since 2000, indicated in an Oct. 16 email to Murphy that he felt he was being forced to use the city’s contractor.

Schoenfelder also expressed frustration with Mason Martin because the builder failed to provide a cost estimate for work on the interior — an expense Schoenfelder agreed to shoulder — before an Oct. 11 deadline for a quote set by the Schimburg Group, the firm hired to coordinate the project.

Murphy emailed Schoenfelder Oct. 18, assuring him he could secure other contractors to provide cost estimates, and setting a Dec. 13 deadline for Schoenfelder to submit his final offer for lease payments.

The first option includes a $21,600 monthly base payment, along with either a 3% annual increase — to begin after the first year — or an annual adjustment based on the consumer price index.

The other option includes an $18,900 monthly base payment, subject to the same options for annual increases as the first option. However, this option requires that Schoenfelder pay $250,000 on signing the lease. His lease expires in December 2020.

Schoenfelder told The Islander in an Oct. 17 phone interview that he won’t make an offer until he receives estimates for the buildout.

Schoenfelder, who splits his time between Holmes Beach and Germany, originally signed the city lease in 2000 for 10 years, with two five-year options and a $5,000 monthly lease payment, which was subject to periodic increases of $500.

The monthly payments, which escalated to $11,900, were discontinued when the city closed the pier in September 2017.

In September, Murphy and Schoenfelder tentatively agreed to a 10-year lease, with two five-year extensions — the same as the current lease.

Murphy told commissioners he plans to ask them for authorization to issue an RFP for the interior buildout at a future meeting so the city can move forward in the event they reject Schoenfelder’s final offer.