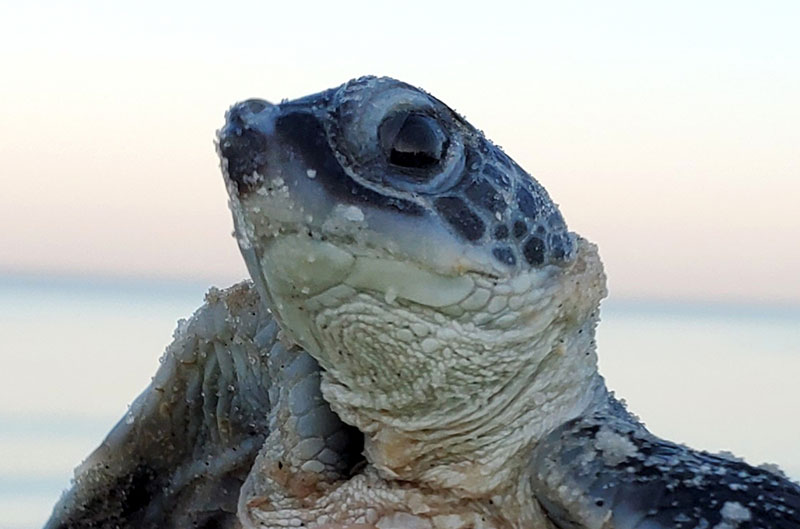 A green sea turtle hatchling takes a close-up Sept. 30 before being transported by turtle watch volunteers to Mote Marine Laboratory in Sarasota where it will be evaluated and released to the Gulf of Mexico. Turtle watch volunteers discovered the hatchling during a nest excavation at Coquina Beach in Bradenton Beach. Islander Photos: Courtesy AMITW 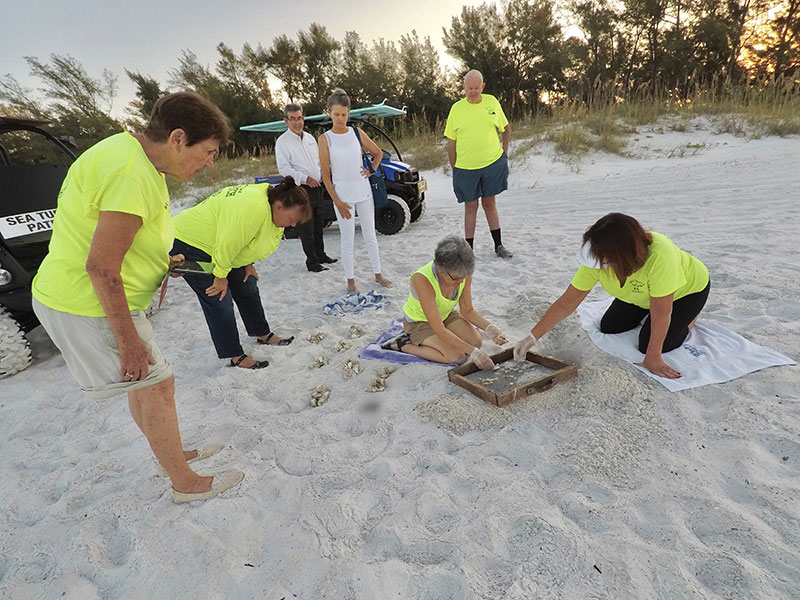 It has been another record-breaking sea turtle nesting season for Anna Maria Island Turtle Watch and Shorebird Monitoring.

With 544 nests spotted on island beaches as of Oct. 4, the season broke the 2018 record of 534 nests. Nine nests were laid by green sea turtles, a less frequent visitor to the island when compared with loggerheads.

And the season officially ends Oct. 31, so volunteers still could come across a green turtle nest or two, as greens nest later in the year.

However, Suzi Fox, who, as AMITW executive director, is paid staff, said Oct. 3 the organization noted another record-breaker that it hopes not to best.

She said turtle watch volunteers documented 59 instances of mature or hatchling sea turtles being drawn away from the Gulf of Mexico by lighting visible from the shoreline — the most AMITW has documented since record-keeping began in the 1990s.

Disorientations were not included in the records maintained by volunteers in the ’90s.

After nesting or hatching, adult and hatchling sea turtles follow their instincts to the Gulf by the reflection of the moon and stars on the water’s surface. Disorientations can occur when lights visible from the shoreline draw turtles away from the water, making them vulnerable to predators, exhaustion or dehydration.

Early in the season, which officially began May 1, nine nesting females disoriented upon emerging from the water to nest. Through Oct. 4, as hatchlings scurried up from nests in the sand by the hundreds, 50 nests on Anna Maria Island saw 11-50 hatchlings disorientated, turning away from the Gulf of Mexico upon emergence.

Fox said many hatchlings from nests north of 80th Street in Holmes Beach traveled south down the beach for several blocks, depending on the brightness of the moon the night they hatched. In one case, hatchlings crawled more than 10 blocks.

Streetlights could be to blame, according to Fox, who is working with Florida Power and Light to install amber-colored lights not visible to sea turtles and safe for humans.

She also said lights on the roof of the Walgreens store on East Bay Drive in Holmes Beach emit sky-glow that could draw hatchlings from the beach.

Fox said she doesn’t anticipate a problem when asked Oct. 3 by The Islander about lighting at the Compass Hotel, a six-story building under construction at 12340 Manatee Ave. W., Bradenton, on Perico Island.

“I believe it will be too far from the beach to have any effect on the turtles,” she said, but added she would review a lighting plan for the building to be sure.

Fox said she purchased an instrument that reads sky-glow and will be learning to use the new tool and taking readings this month.

As of Oct. 4, 11 nests remained to hatch on the island and about 26,868 hatchlings had made their way to the Gulf.

One thought on “Record season, challenges”