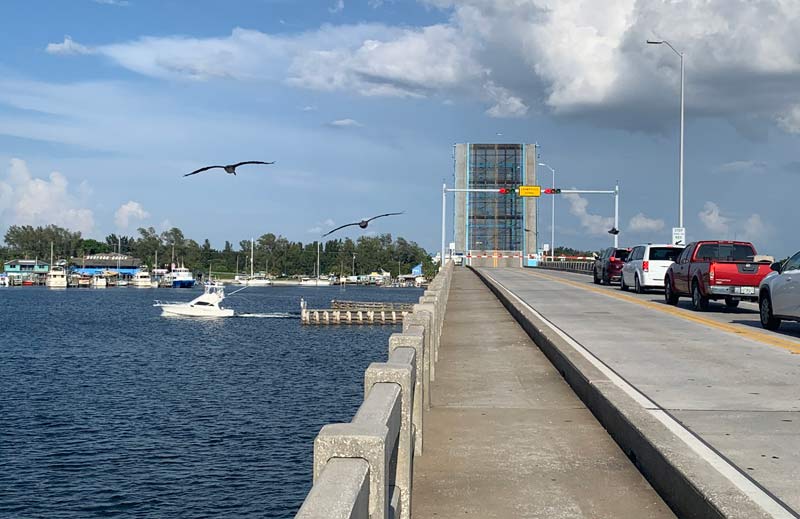 The Cortez Bridge opens in September for boat traffic on the Intracoastal Waterway with the Seafood Shack restaurant and marina in the distance. Islander Photo: Arthur Brice

A former Manatee County commissioner has initiated a legal challenge to the Florida Department of Transportation’s plan to build a 65-foot-clearance fixed span to replace the Cortez Bridge.

Joe McClash, who served on the county board from 1990 to 2012, is joined in his quest for a formal administrative hearing by three organizations and three Cortez residents, including another former county commissioner.

“This is a signal to the DOT to do the right thing,” McClash said. It is intended to give them “a taste of what’s coming.”

The DOT announced Oct. 10 it had approved a yearslong project development and environment study and was going ahead with design work for the 65-foot-clearance fixed bridge. The other two options were to repair the 62-year-old drawbridge or replace it with a 35-foot-clearance drawbridge.

Opponents of the high bridge say it would forever change the character of the quaint fishing village of Cortez, designated a historic district in 1995. Many residents have been fighting the megabridge since the DOT first revealed a megabridge plan in 1989.

“The DOT had a number of bridges they were trying to drop down everyone’s throats in the 1980s and ’90s,” McClash said.

McClash and others don’t oppose replacing the bridge, they just don’t want a megabridge.

Joe Kane, one of the petitioners in the legal challenge, has lived in Cortez for more than two decades.

The Anna Maria Island Bridge on Manatee Avenue, a second drawbridge connecting the island to the mainland built the same year, also is slated to be replaced by a 65-foot-clearance fixed span. Its design schedule is further along than the Cortez Bridge because the DOT approved it first.

McClash’s legal challenge contains 25 instances in which he says the DOT acted wrongly. One of those points has to do with the Anna Maria Island Bridge.

According to the petition, the DOT decision is contrary to an agreement between Bradenton Beach, Holmes Beach, Manatee County and DOT that established a compromise for the Anna Maria Island Bridge to be replaced with a high, fixed bridge and the Cortez Bridge to be maintained as a bascule bridge.

“The agreement was put in place to avoid a challenge to the bridges,” the petition states.

McClash said he, then-Holmes Beach Mayor Carol Whitmore and then-Bradenton Beach Mayor Katie Pierola reached that agreement with the DOT while he was serving as a county commissioner.

“It didn’t surprise me that a former commissioner took this action because they were involved when they were commissioners in communicating with the DOT when we discussed plans for the Cortez Bridge in the future,” she said Oct. 25.

“The DOT wanted our support for the Manatee Avenue bridge,” she said. “That was kind of like the carrot.”

Others are the environmental group, ManaSota-88, and two nonprofits, the Florida Institute for Saltwater Heritage and Cortez Village Historical Society.

The Sarasota/Manatee Metropolitan Planning Organization is not part of the challenge, which executive director David Hutchinson called “a procedural matter.”

For some Cortez residents, though, it’s not just a legal matter. It’s the quality of their remaining years in the village.

And Bradenton Beach, as well as the cities of Anna Maria and Holmes Beach, have adopted resolutions in opposition to the high, fixed bridge on Cortez Road.

2 thoughts on “Round 1: Opponents launch challenge to Cortez Bridge plans”