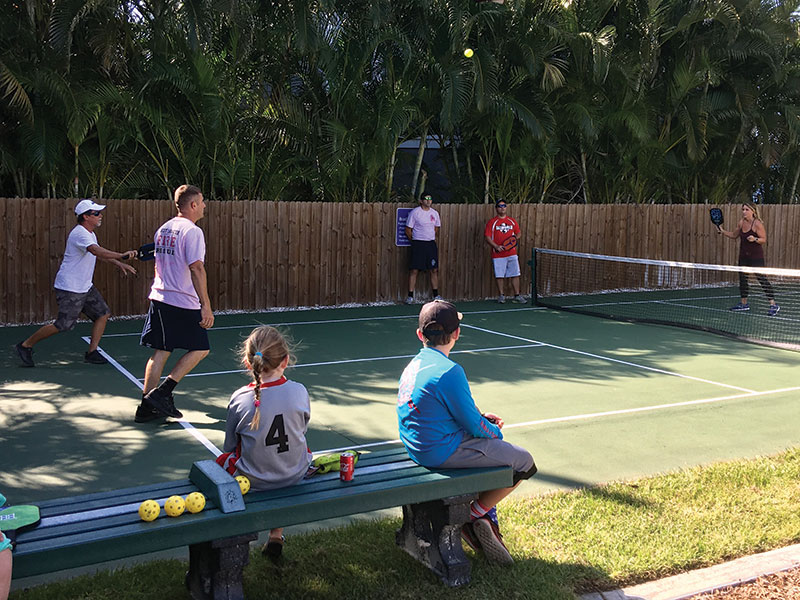 After three weeks of action, there are two teams still chasing perfection in the competitive youth soccer league at the Center of Anna Maria Island.

HSH Designs leads the 8-10 division with a 3-0 record, four points ahead of Moss Builders, which is undefeated at 1-0-2, but two ties put them in second place. Ugly Grouper follows with a 1-1-1 record, just ahead of West Coast Surf Shop at 0-2-1.

The 11-15 division is led by Ugly Grouper with a 3-0 record, a game ahead of Lancaster Designs at 2-1. Island Vacation Properties follows at 1-2, while Progressive Cabinetry is still in search of a victory.

The action last week kicked off Oct. 8 for the 8-10 division with HSH Designs rolling to a 5-0 victory over Ugly Grouper. Bam Gartman led the way with 2 goals, while Sterling Holiday and Savanna Coba scored a goal each. Cale Rudacille helped preserve the shutout with four saves in goal.

Ugly Grouper was shut out on the scoreboard, but goalie Clancy Cusack made seven saves to help keep the team in the game.

Ugly Grouper rolled to a 6-2 victory over Progressive Cabinetry behind 5 goals from Ethan Sackett. Frankie Coleman added a goal and Travis Bates made nine saves to help preserve the victory.

Two teams advanced from pool play and battled for the day’s championship during Oct. 9 horseshoe action at the Anna Maria City Hall horseshoe pits. Steve Doyle and Hank Huyghe jumped out to an early lead and never looked back on the way to a dominating 25-8 victory over Norm Good and Dennis Cohen. Doyle emphatically ended the match with a double-ringer.

Huyghe found himself back in the winner’s circle during the Oct. 12 games, this time teamed up with Dom Livedoti on a 3-0 pool-play record.

Play gets underway at 9 a.m. Wednesdays and Saturdays at the Anna Maria City Hall pits. Warmups begin at 8:45 a.m. followed by random team selection. There is no charge to play and everyone is welcome.

Blake Ress carded an impressive score of plus-7 to win the men’s nine-hole modified-Stableford system match Oct. 7 to kick the week’s golf action at the Key Royale Club in Holmes Beach. Mike Cusato was alone in second with a plus-3.

The women were on the course Oct. 8 for a nine-hole individual-low-net match in two flights.

Jana Samuels took the top spot in Flight A with a 2-under-par 30, four shots ahead of second-place finisher Helen Pollock.

Pam Alvord had the round of the day, finishing with a 4-under-par 28 to grab the top spot in Flight B. Ellen Boin was a stroke back in second, while Penny Williams had a chipin on the third hole and took third place with a 2-under-par 30.

The men played a nine-hole scramble Oct. 10 that saw the team of Mike Cusato, Barry Izzard, Bob Leeham and Larry Pippel combine on a 4-under-par 28 to forge a first-place tie with the team of Hoyt Miller, Terry Tarras and Ron Vandeman.