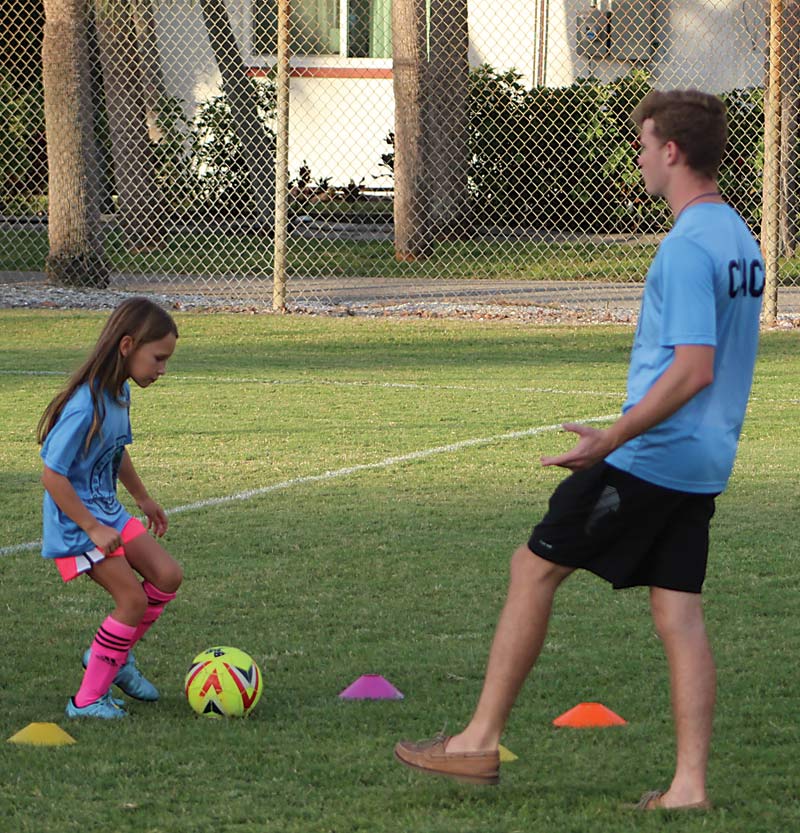 The fall soccer league at the Center of Anna Maria Island is underway for youth players ages 3 to 15.

The two youngest divisions, the 3-5 and 6-7 age groups, have traditionally been instructional. They don’t compete for results and don’t keep standings. There used to be four or so teams but, over the past couple of seasons, the center has adopted an “academy” style for these groups. There are no permanent teams and there is no scorekeeping.

This keeps the focus where it needs to be: individual player development. Too often in youth sports, the focus is on winning and not developing skills to be the best players they can become.

During a recent session for Bridge Tender Inn, the sponsor of the 6-7s, the players participated in a skills clinic, focusing on dribbling, passing, trapping and shooting. After the clinic, the players put their lessons in play in competitive scrimmages.

The kids and coaches all appear to be enjoying the clinics and scrimmages, and the kids will take their skills to the big field in the near future. Game on!

On the big field at the center, soccer action in the 8-10 and 11-15 divisions continues with tight 8-10 division standings. The top three are separated by only four points, with HSH Designs on top at 4-1, closely followed by 3-1-1 Ugly Grouper. You can’t count out Moss Builders just yet, as they are 2-1-2, while West Coast Surf Shop is still in search of a victory.

The 11-15 division looks to be a two-horse race between 4-0-1 Ugly Grouper and 3-1-1 Lancaster Design. Island Vacation Properties and Progressive Cabinetry are tied for third with matching 1-4 records.

Action last week kicked off with eight matches played Oct. 22, when HSH Designs edged West Coast Surf Shop 3-2 behind a pair of goals from Savanna Coba and a goal and six saves from Cale Rudacille. Sterling Holiday chipped in an assist and Dylan Sato came through with 12 saves to help preserve the victory.

Ugly Grouper defeated Moss Builders by a 2-0 score in the second match of the evening behind a pair of goals from Nixon Conner and a combined 10 saves from brothers Jack and Jesse Zaccagnino.

Lancaster Design kicked off the first 11-15 division match of the night with a 4-3 victory over Progressive Cabinetry behind a hat trick from Jackson Pakbaz and a goal from Gabriella Gilbert. Christian Cole added an assist, while also contributing eight saves in goal.

Thomas Phillpott had a pair of goals and Jayden Sparkes scored once to lead Island Vacation Properties in the loss.

After two weeks of action in the adult soccer league at the center, Sato Real Estate, Blalock Walters and Flynn Law are unbeaten. Moss Builders, MuniPlan and Ross Built are 1-1, while Vintage Beach, Vacasa and Lancaster Designs are still in search of wins.

Action Oct. 23 kicked off with Blalock Walters rolling to an 8-2 victory behind a balanced offense that saw seven of 10 rostered players notch at least one goal. Brooke Capperelli led the way with a pair of goals, while Matt Skaggs, Greg DeMuse, Matt Plummer, Robbie Fellowes, Luis Pichardo and Neil Fellowes each scored once. Goalie Luke Grady helped preserve the victory with eight saves.

Miguel Ajoy and Julio Santos scored a goal each to lead Lancaster Design, which also received six saves in the loss from Rico Einbart.

The second match of the night saw MuniPlan edge Vacasa 4-2 behind a pair of goals from Sean Flynn and a goal each from Ryan Hogan and Nathan Kragt. Ben Sato helped preserve the victory with 13 saves in goal.

Sato Real Estate cruised to a 7-2 victory over Moss Builders behind 5 goals from Amy Ivin and a goal each from Josh Sato and Tim Holly, who also added two assists. Chris Klotz chipped in with an assist and Cliff Powell made 12 saves in the victory.

Gerardo Urbiola and Eliza Faillace scored a goal each to lead Moss Builders, which also received nine saves from Jordan Demers in the loss.

The last match of the night saw Flynn Law roll to a 9-4 victory over Ross Built behind 4 goals from Murat Akay and 3 goals from Chris Scott. Zachary Lieb added 2 goals for Flynn Law, which also received 10 saves in the victory from Robb Marshall.

A hat trick from Connor Bystrom paced the Ross Built offense in the loss, which also received a goal from Chris Circharo and 12 saves from Mark Rudacille.

Two teams emerged from pool play during Oct. 23 horseshoe action at the Anna Maria City hall horseshoe pits. The team of Bob Palmer and Jerry Disbrow survived a close call in their final pool play match to deny Hank Huyghe and Bob Heiger the outright title for the day as both finished 3-0 in pool play.

The finals were all Palmer and Disbrow as they rolled to a 21-7 victory to earn the day’s bragging rights.

The Oct. 26 games saw Tom Farrington walk his way to the winner’s circle after earning the lone 3-0 record in pool play.

The course was still drying out from a torrential downpour, so there was no golf action at the Key Royale Club in Holmes Beach Oct. 21-22.

The men got out Oct. 24 for a nine-hole scramble that saw the team of Tim Friesen, Barry Izzard, Tom Nelson and Tom Solosky combine on a 4-under-par 28 to earn clubhouse bragging rights for the week.