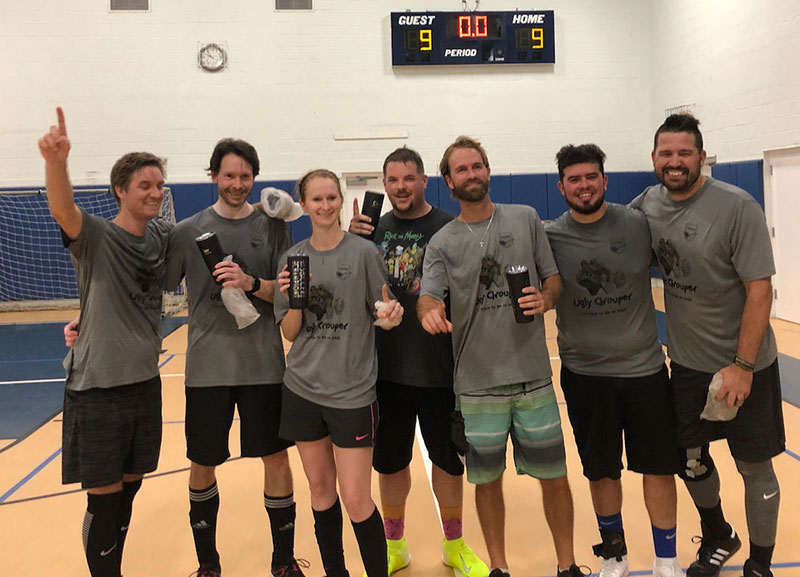 The game was 9-9 at the end of regulation time and was decided in a penalty kick shootout. Ugly Grouper prevailed 3-2 in the shootout to take the title.

Connor Bystrom paced Ugly Grouper with five goals, while Chris Klotz added 2 goals, two assists and seven saves. Yuri Pereira chipped in with a goal and three assists for Ugly Grouper, which also received a goal from Olaf Krause and 17 saves from John Haggerty in the victory.

Kevin Roman paced Progressive with 6 goals, while Jessica Williams added 2 goals and an assist. Diego Felipe scored a goal and made 17 saves in goal for Progressive, which also received 14 saves from Steve Oelfke in the loss.

Youth soccer action completed its second week of action on the field at the center and the standings are pretty tight.

The 8-10 division has HSH Designs on top with a 2-0 record followed by Ugly Grouper and Moss Builders, both tied for second with 1-0-1 records. West Coast Surf Shop follows with an 0-2 record.

The action kicked off Oct. 2 with HSH Designs rolling to a 6-1 victory over the surfers behind two goals each from Savanna Coba and Sterling Holiday. Bam Gartman added a goal and an assist, while Cale Rudacille finished with a goal and four saves in the victory.

Ugly Grouper and Moss Builders battled to a 2-2 tie in the second 8-10 division match of the night. Moss received a goal from Jackson Titen and seven saves from Alexander Teich and benefited from an own goal in the tie.

Nixon Connor scored both goals to lead Ugly Grouper, which saw nine saves from Jack Zaccagnino and Jesse Zaccagnino in the tie.

The standings are similar in the 11-15 division with Ugly Grouper on top with a 2-0 record followed by Island Vacation Properties and Lancaster Designs in a tie for second at 1-1. Progressive Cabinetry follows with an 0-2 record.

The 11-15 action kicked off Oct. 2 with Lancaster Designs edging Progressive Cabinetry 4-2 behind 4 goals from Jackson Pakbaz. Dalton Fox and Christian Cole combined on six saves in goal to help preserve the victory.

The second 11-15 division match saw Ugly Grouper outscore Island Vacation Properties 5-2 behind a hat trick from Abbie Philpott and a goal each from Frankie Coleman and Ethan Sackett. Travis Bates made five saves in the victory.

Jayden Sparks scored a goal to lead Island Vacation Properties, which also received a goal and eight saves from Thomas Philpott in the loss.

Two teams emerged from pool play and met in the finals during Oct. 2 horseshoe action at the Anna Maria City Hall horseshoe pits.

Dom Livedoti and Jerry Disbrow jumped out to an early lead and never looked back on the way to a 24-8 victory over Steve Doyle and Bob Heiger.

There were again only two teams to advance out of pool play during the Oct. 5 games. Livedoti was again in the mix, this time teamed with Hank Huyghe to cruise to a 21-3 victory over Heiger and Jerry Disbrow for the day’s championship.

There was another full week of golf action at the Key Royale Club starting Sept. 30 with the men playing a nine-hole modified-Stableford system match. Hoyt Miller and Ron Vandeman finished in a tie for first place after they both carded plus-4s.

The women played a nine-hole individual-low-net match in two flights Oct. 1. Diane Miller took individual honors in Flight A with an even-par 32.